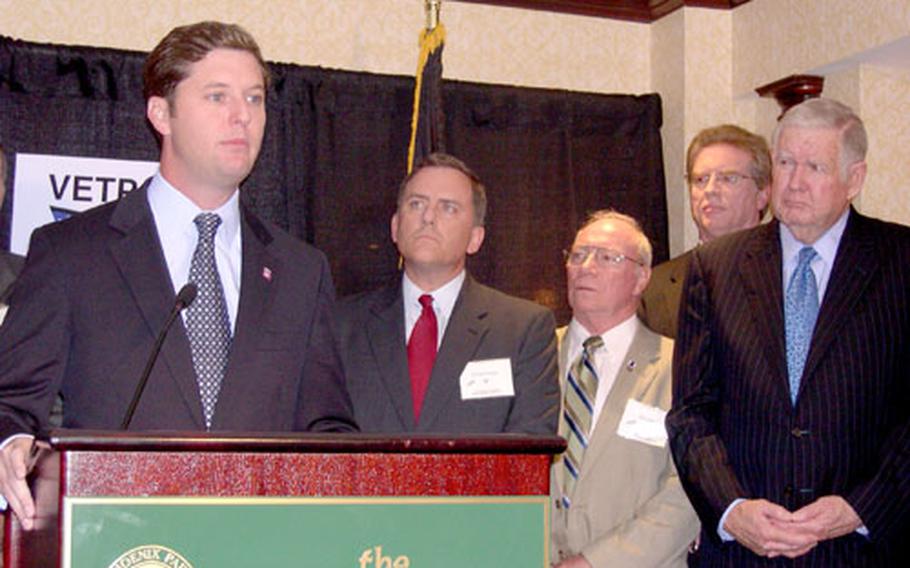 WASHINGTON &#8212; A coalition of veterans running as Democrats for Congress in November blasted Republican strategists for campaign tactics they say are an attempt to label them cowards for their opposition to the president&#8217;s strategy for Iraq.

&#8220;Those of us who stood and wore the uniform will no longer tolerate the personal, &#8216;Swift Boat&#8217; attacks that allow the opposition not to address fundamental failures in the policies that are destroying this nation,&#8221; said Eric Massa, a Navy veteran running for office in New York&#8217;s 29th Congressional district.

Republicans countered by saying the veteran candidates&#8217; service isn&#8217;t being challenged, but their policies are.

&#8220;Their patriotism is not the issue here,&#8221; said Josh Holmes, spokesman for the Republican National Committee. &#8220;But if they are calling for the military to cut and run, their opponents must question their agenda and whether they&#8217;re making this country safer.&#8221;

Wednesday&#8217;s news conference featured 10 of the 22 candidates backed by the Veterans Alliance for Security and Democracy, a political action committee whose platform supports withdrawing all U.S. troops from Iraq by 2008.

Also attending was Rep. John Murtha, D-Pa., an outspoken opponent of the president&#8217;s policies in Iraq, who said he is infuriated with anyone who would question veterans&#8217; credentials to criticize those types of military decisions.

&#8220;They continue to try and discredit us, and it&#8217;s outrageous, some of the personal attacks just because a person disagrees with policy,&#8221; he said. &#8220;To these people who have never been there, sitting on their fat backsides in the White House and other places, sending troops out without understanding what the mission is &#8212; we have to fight back.&#8221;

All four have backed statements from the committee that the war in Iraq was &#8220;a major strategic blunder&#8221; and time lines for troop withdrawals must be set before meaningful progress can begin.

Committee organizers say the large number of Democratic veteran candidates for the November elections &#8212; more than 50 challengers have past military service and are running as Democrats &#8212; shows the party&#8217;s clout when it comes to national security. The committee also lists 20 Republican challengers who are veterans in the upcoming races.

But Holmes dismissed the higher Democrat numbers, saying many of those candidates are long-shots who are simply parroting Democratic opposition to the president.