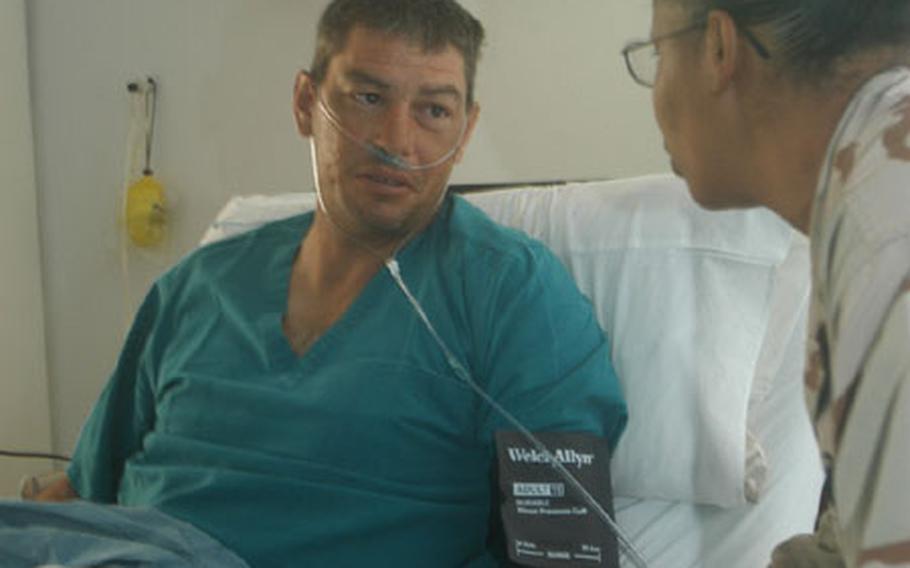 A Navy nurse checks on Spc. Thomas Looper of the 1742nd Transportation Company out of South Dakota at the Kuwaiti Armed Forces Hospital. Looper just finished a tour in Balad, Iraq, when he fell off his truck and was injured. He broke two ribs and punctured a lung. (Jessica Inigo / S&S)

KUWAIT CITY &#8212; The Kuwaiti Armed Forces Hospital will be handed back to the Kuwaiti people in less than two months as the military prepares to build a new tent-based facility on Camp Arifjan in Kuwait.

The hospital treats all American servicemembers, as well as members of coalition forces.

Although sharing the hospital building in Kuwait City was beneficial to both the civilians and the Navy&#8217;s Expeditionary Medical Facility from Portsmouth, Va., the command said it&#8217;s time to move on.

He said that the Kuwaitis asked if they could have the facility back.

Although having a building is nice, Snyder said the new tent-based facility would have the same capabilities of support combat and sustainment injuries, as well as more beds and more space. This means the tent hospital will be able to accommodate more elective surgeries.

Tents will have hardwood floors, air conditioning, and more holding capabilities than the one floor in the Kuwaiti hospital.

Once the move date comes closer, Snyder said there would be a period of dual operations, so that there is never a lull in service.

EMF Portsmouth will have a one-year tour of duty in Kuwait and then hand off the command to another naval unit.

In the past two months, the Navy units have learned the Army&#8217;s way of being a medic, including the proper paperwork and staffing that the Army uses, according to Snyder.

Also, the Portsmouth unit had to get used to working with reservists, since it is an active-duty unit.

&#8220;There are not a lot of Navy guys out living in the middle of the desert, but the Army needed relief so we rogered up to take the assignment,&#8221; Snyder said.

The Navy EMF falls under the Army&#8217;s 8th Medical Brigade, but all medical clinics in Kuwait fall under the Navy&#8217;s command and control.

Looper ended up in the hospital while preparing to load equipment after a tour in Balad, Iraq. He fell from the top of his truck in Talil, Iraq, and broke two ribs and punctured a lung.

Looper is expected to leave the hospital soon and return home with the rest of his unit, according to the Navy doctors.