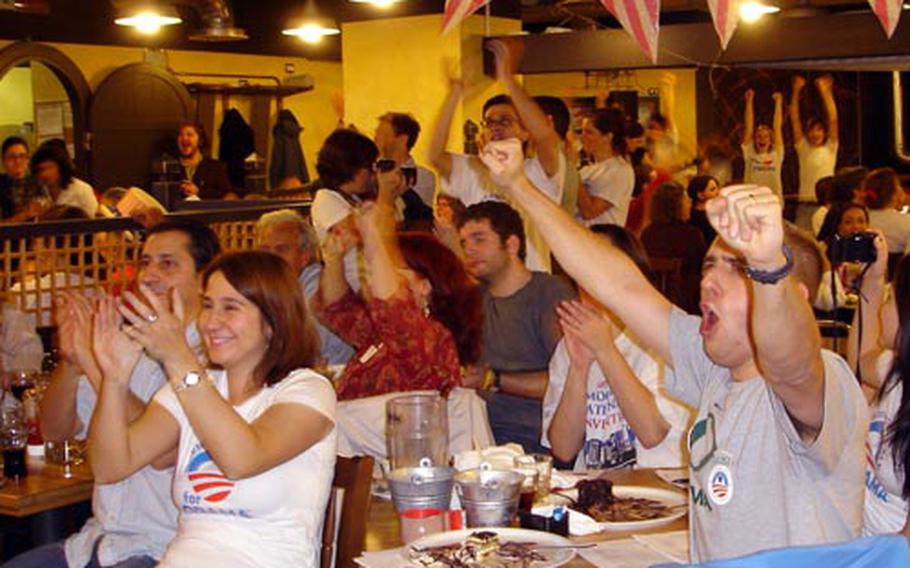 U.S. troops and family members around the world woke up Wednesday with a new president, after Sen. Barack Obama defeated Sen. John McCain in a historic contest.

And like their countrymen in the States, Americans overseas voiced opinions about the election results that were as diverse as the men and women who make up the U.S. military.

At many bases in Europe, folks were following the election results into the wee hours of Wednesday morning.

In Stuttgart, Germany, Army Pfc. Robert Hopwood stayed up all night watching the news and waiting for confirmation of an Obama win.

For Hopwood, the top issue is Iraq, and the appeal of Obama is his commitment to a fixed deadline for withdrawal.

"I think everybody is tired of war," he said.

And while critics have derided the problems with the absentee voting system, at least one troop knew his vote had been counted.

"Hopefully, I singlehandedly saved the world with my absentee ballot," Tech. Sgt. Joe Bosacco, a member of the 167th Airlift Wing at Ramstein Air Base, joked.

At bases in the Pacific, election results started coming in by midday Wednesday.

At the Dragon Hill Lodge on Yongsan Garrison in Seoul, South Korea, troops, civilians and kids sat glued to CNN.

As news outlets declared Obama the winner, a small gathering at the Power Zone on Japan&#8217;s Yokota Air Base cheered and pumped their fists.

"I&#8217;ve been following it from the beginning and this is awesome," said Jacqui Maldonado. "This country is ready for a change."

Spc. Rodney Washington, of the 208th Finance Battalion in Stuttgart, Germany, said Obama will help take the country in a new direction.

Washington, who is black, said growing up that he never imagined his country would elect a black president during his lifetime.

Others in Stuttgart weren&#8217;t as pleased.

Quinn, a former Marine, said many servicemembers are concerned about the military pay freezes that accompanied the Clinton administration, and that such wage issues will pop up again in the Obama administration.

"A lot of guys are worried about that," he said. "I think most people in the military are for McCain, but that wasn&#8217;t enough."

At Camp Foster on Okinawa, Japan, 55-year-old Pat Beavers said the day would be "the most historical election" of her lifetime.

But his views underwent a massive shift in the past few months.

"I never thought I could go against [McCain]. I thought it was his destiny," Lazarus said. "But now it seems like it was Barack&#8217;s destiny to become president. I think he&#8217;s going to try to bring both sides together."

Following the election overseas is more poignant because Americans can better understand how the race affects the whole world, Petty Officer 1st Class Leonard Pope said Wednesday at Sasebo Naval Base in Japan.

With the historic impact of Obama&#8217;s election sinking in, troops worldwide differed on what his presidency will mean for the America&#8217;s future.

"But I think the old boy walked into a hornet&#8217;s nest," Alexander said, citing the litany of crises including the economy and the Iraq and Afghanistan wars. "It&#8217;s going to be hard for him."

"Cut the wasteful spending," he said. "We waste way too much money in the military."

At Italy&#8217;s Aviano Air Base, Staff Sgt. Karolien Thornton said she&#8217;s hopeful for Obama but not for the economy.

At Ramstein, Airman 1st Class Michael Haid said he was a McCain man, but not just because of the Arizona senator&#8217;s military history.

Haid said he&#8217;s getting out of the Air Force soon and is concerned with how Obama&#8217;s tax plans will affect his ability to start a business.

Pauli, the Yongsan-based soldier, was disappointed that the Iraq war had fallen behind the economy as a top issue.

"That&#8217;s a little unsettling," said Pauli, who works with the Army&#8217;s Installation Management Command at Yongsan. "War is life and death. And the economy is dollars and cents."

In Sasebo, Pope said military issues, including fiscal budgeting and farming out of jobs to civilians were his top concerns.

Not everyone was feeling those good-time Obama vibes.

Spc. Ryan Horst said he&#8217;s a big believer in the Second Amendment and is worried that government will swing to the far left on gun issues.

At Mildenhall in England, Senior Airman Broderick Carroll said he fell asleep early Wednesday morning watching the returns but got back up at 4:30 a.m. to see if his man had won. He did.

"It makes anybody in America know they can do anything they want if they put their mind to it," he said.

Max Goodlow, a civilian contractor working at Yokosuka Naval Base, Japan, said that no matter who won, they can&#8217;t be any worse than outgoing President Bush, who now unites most Americans&#8217; disdain as he leaves office with one of the lowest presidential approval ratings in history.

"They both have different views but we just need new blood, period," he said. "Bush set the table for what not to do."