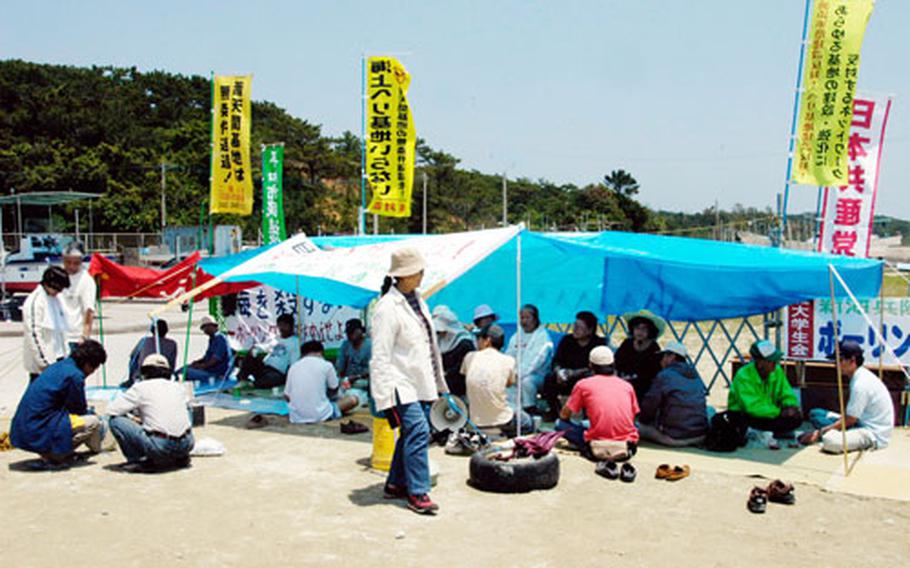 Buy Photo
Okinawans line Highway 330 near Camp Schwab on Jan. 18, part of an ongoing protest by anti-base activists and environmentalists against an air station proposed at the island’s Henoko port. U.S. and Japanese officials announced Wednesday that the facility would not be built at Henoko. (Chiyomi Sumida/Stars and Stripes)

The agreement came after three days of negotiations in Tokyo and is to be made formal over the weekend at the &#8220;two-plus-two&#8221; ministerial-level security meeting in Washington, U.S. and Japanese officials said.

Speaking to reporters in Tokyo on Wednesday, Undersecretary of Defense Richard Lawless said Japan&#8217;s government &#8220;has emphasized to the U.S. that the plan we have accepted &#8230; provides a comprehensive, capable and executable solution&#8221; for replacing Futenma &#8220;in an expeditious and complete manner.&#8221;

&#8220;Our intention is to formally accept this specific proposal later this week by including it as one of several realignment actions to be jointly recommended in our bilateral report on the progress of Alliance Transformation and Realignment.&#8221;

Lawless did not go into details about the plan. But in a statement the U.S. Embassy in Tokyo released later, he was quoted as saying that it &#8220;represents the best solution available &#8230; this plan can and will be fully executable in a comprehensive and timely manner, thereby allowing us to return Futenma Air Station to the people of Okinawa and Japan.&#8221;

In 1996, the United States and Japan agreed to move MCAS Futenma from Okinawa&#8217;s urban center to a more remote location on the island. After years of negotiations, a site on reclaimed land and a reef some two miles off Okinawa&#8217;s northeast shore was selected for a $2.87 billion airport with a 1.5-mile runway, connected to the Marine base by a causeway. But environmental and anti-base opponents have delayed the project. Japan has offered to scrap it in return for its plan to build an airport on Camp Schwab on the northern part of the island, extending onto reclaimed land in Oura Wan Bay. As a compromise, the 1,500-meter runway suggested by the Japanese plan was extended to 1,800 meters (about 1.1 miles), according to Yoshinori Ohno, director general of Japan&#8217;s Self-Defense Agency.

U.S. officials had favored a reduced runway near the original replacement site, stressing that the facility would be further from residential areas.

Okinawa Gov. Keiichi Inamine is expected to oppose the new plan. He supported the original Futenma replacement facility on the condition civilian aircraft also could use it. Prefectural officials declined to comment on Wednesday&#8217;s announcement.

Ohno told reporters that U.S. and Japanese governments reached agreement &#8220;on all the issues on the realignment including relocation of Futenma air station operations.&#8221;

&#8220;A runway will be built on Camp Schwab, using about 20 percent of the area where barracks are presently located, with a slight extension to the south in Oura Wan Bay,&#8221; he said.

&#8220;Japan will shoulder the cost as much as possible,&#8221; Ohno said, adding that he would send the head of the Defense Facilities Administration Agency to Okinawa to discuss the agreement with local officials before the bilateral talks in Washington.

He also did not go into any details on the realignment agreement.

The Futenma relocation issue was seen as a stumbling block to other realignment considerations, including proposals to close the Naha Military Port and Camp Kinser, moving their functions to Marine bases in northern Okinawa; reduce the size of Camp Foster; and move the command element of the III Marine Expeditionary Force to Guam, shifting some 3,000 to 5,000 Marines to that U.S. territory.

Foreign Minister Nobutaka Machimura told reporters in Tokyo that the discussions had an atmosphere of urgency, &#8220;that not reaching an agreement on the security issue, a central part of the U.S.-Japan relationship, would seriously damage relations.&#8221;

Okinawa is host to slightly more than half of the U.S. troops in Japan, with U.S. bases covering one-fifth of the island. Of land in Japan used solely by the U.S. military, 75 percent is on Okinawa.