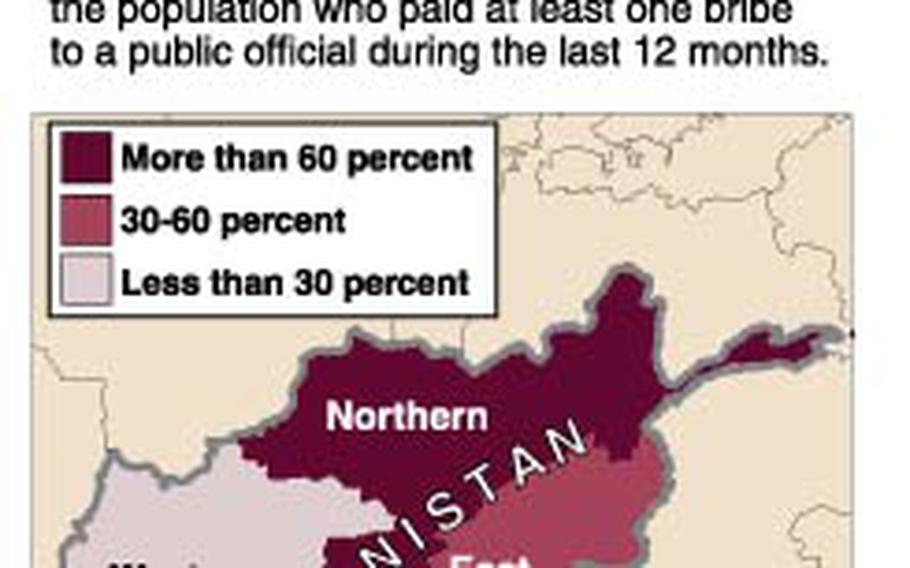 LONDON &#8212; Bribes and kickbacks paid to local Afghan government and security officials are equivalent to roughly a quarter of the war-torn country&#8217;s legitimate gross domestic product, according to a U.N. report released Tuesday.

In all, Afghans paid $2.5 billion over the past year in bribes and other illicit payments to everyone from government officials to policemen, the report states. Throw in the $2.8 billion made off the country&#8217;s drug trade, and that&#8217;s tantamount to roughly half of Afghanistan&#8217;s GDP.

In general, 59 percent of respondents regard corruption as the biggest problem in their everyday lives, ahead of security and unemployment, according to the report by the U.N.&#8217;s Office of Drugs and Crime.

While a patronage system has long existed in Afghan culture, the instances of bribery and the money involved have increased as the country&#8217;s drug trade exploded in recent years, Antonio Maria Costa, UNODC&#8217;s executive director, said Tuesday during a forum at London&#8217;s International Institute for Strategic Studies think tank.

Half of the Afghans surveyed said they had to pay a bribe or other form of kickback to an official in the past year, according to the report.

The report attempts to take a bottom-up look at corruption and how it affects everyday people, rather than examining the issue at higher governmental levels.

&#8220;The political will and the analytical tools to make a statistically robust survey of grand-scale profiteering in Afghanistan are not yet available,&#8221; Costa says in the report.

The report comes amid efforts to clean up corruption in the government, initiatives critics say may not be enough. The Afghan government launched a new anti-corruption task force in November, the third formal attempt to address the problem, and President Hamid Karzai stressed anti-corruption measures during his inauguration speech last year.

Afghan National Police members and local government officials were most often the ones seeking illicit payments, according to the report&#8217;s findings. About a quarter of Afghans surveyed had to pay at least one bribe to police officers in the past year, the report states.

This ground-level corruption bleeds into many aspects of the average Afghan&#8217;s life, including health care, education and legal issues.

&#8220;At the moment, the Afghan people are under the impression that it is cheaper to buy a judge than to hire a lawyer,&#8221; Costa said in the report.

It&#8217;s not just local officials that are corrupt in the eyes of the people. More than half of Afghans surveyed believe international groups including nongovernmental organizations are corrupt and in Afghanistan just to get rich, the report states, a perception that risks undermining aid outreach in the country.

The amount of bribes varied according to the types of public officials, with teachers, doctors, and nurses receiving less than $100 per bribe; police, local authorities and tax officials requesting up to $200; and prosecutors and customs officers receiving more than that. The average bribe is $160 in a nation where the GDP per capita is $425 per year.

Kickbacks are so common that more than a third of the population thinks it is the norm, with less than 10 percent of urban populations reporting acts of corruption to the proper authorities.

Corruption weakens people&#8217;s faith in the Afghan government and its institutions, according to the report, pushing people to shadowy authorities like the Taliban.

&#8220;When people, who earn less than $2 a day, have to bribe their way into basic services, they lose confidence in the system and look for alternative providers of security and welfare,&#8221; the report states.