TroopTube video site for military use is launched 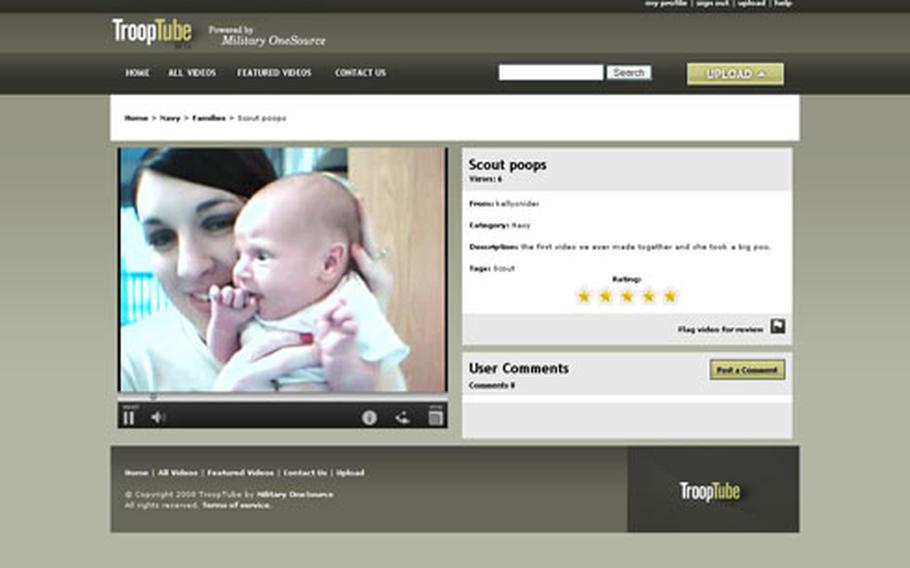 To learn more about the video sharing site TroopTube, go to www.trooptube.tv ()

WASHINGTON &#8212; TroopTube, an official Pentagon video sharing site, made its public debut this week, 18 months after the Defense Department barred YouTube from its military network.

Pentagon spokesman Lt. Col. Les&#8217; Melnyk said the goal isn&#8217;t to replace YouTube, but to give troops a reliable site for personal videos and officials a way to monitor those uploads for potential operational security violations.

"It&#8217;s still evolving, and as it grows in popularity they&#8217;ll probably make some changes," he said. "But the idea is to allow troops to experience some of their home life while they&#8217;re deployed."

Most are less than a half-minute long and feature quick messages from spouses and family of deployed troops. Officials have also uploaded words of thanks from celebrities and press conferences from service leaders to the site.

All of those videos have been reviewed and approved by Military One Source officials, Melnyk said. Unlike YouTube, the TroopTube site doesn&#8217;t feature any movie trailers, television shows, sports highlights or independent comedy clips.

Melnyk said users could upload those types of videos in the future, so long as they don&#8217;t violate copyright laws and don&#8217;t present any security threats. Clips that do will be flagged and deleted by moderators.

The main goal is still to collect family videos and messages from home, he said.

In May 2007, officials at U.S. Strategic Command blocked YouTube, MySpace and a host of other popular video Web sites on Defense Department computers, saying the media-intensive sites were a drain on the official network.

Morale, Welfare and Recreation computers connected to outside networks can still access the sites, and troops with personal computers receiving nonmilitary Internet access are still allowed to visit them.

Alex Castro, CEO of Delve Networks, a contractor who helped put together the new site, said the video compression system used on TroopTube creates less bandwidth drag on the Defense Department network than YouTube did.

The main advantage he sees is control over the videos and the offerings.

While the site requires viewers to register before seeing videos, it has no authentication process to ensure users are in the military or related to a servicemember. Melnyk said the main focus is to regulate the videos on the site, not who views them.

The launch of TroopTube should not affect the Department&#8217;s use of YouTube for its own nonmilitary outreach efforts, he said.

Nine different agencies within the department, including Multi&#8211;National Force&#8212;Iraq, have set up channels on the heavily viewed site to feature videos of troops in action.

To learn more about the video sharing site TroopTube, go to www.trooptube.tv