Troops train for work in the trenches 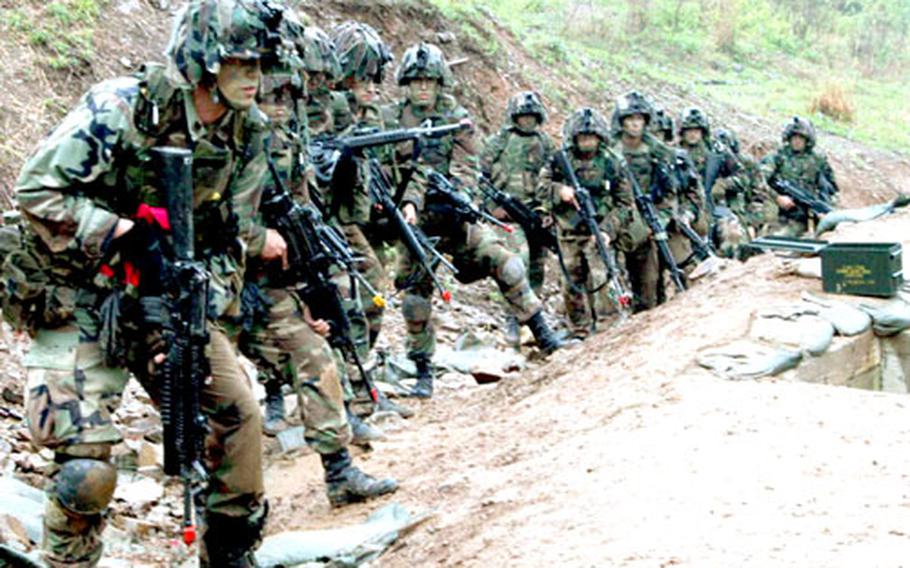 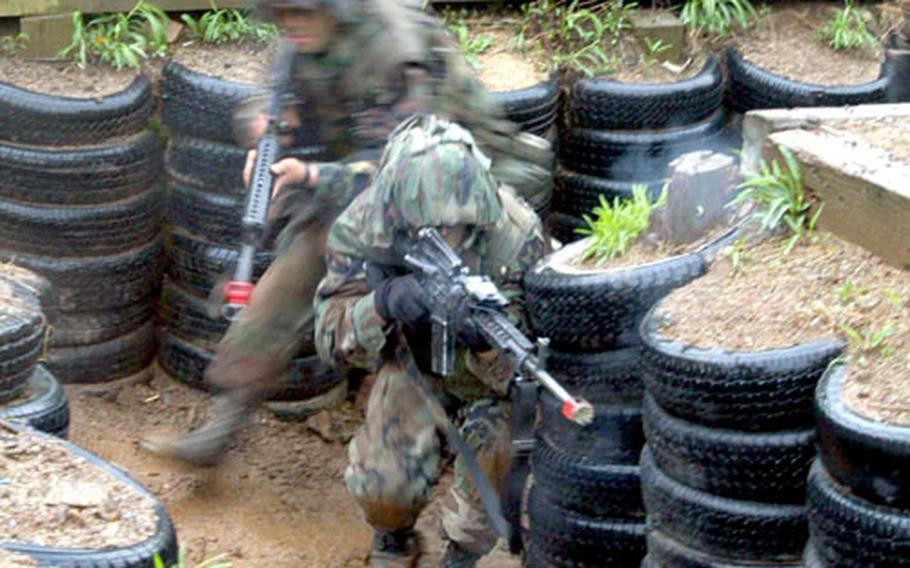 Soldiers move through a trench at Cherokee Valley as they practice a skill that would be needed in a conflict with North Korea. Rounding corners proved to be one of the most challenging tasks. (Seth Robson / S&S)

This week, soldiers from the division&#8217;s 2nd Battalion, 9th Infantry Regiment practiced storming the sort of trenches they would encounter in a conflict with North Korea.

Soldiers from 2-9&#8217;s Company C, the Mad Dawgs, were at Cherokee Valley on Monday learning to clear trenches in nine-man, squad-sized units. They trained against an opposition force using blank ammunition before making a live-fire sweep of the ditches, shooting man-sized targets and yellow balloons standing in for the enemy.

Live-fire training started when a two-man breach team leapt into the trench, followed closely by their team leader. The team leader carried a small orange flag to indicate the unit&#8217;s position to soldiers providing support by fire or to Bradley Fighting Vehicles suppressing the enemy in the trench.

The last team member into the trench was the saw-gunner with his M-249 machine gun.

Corners appeared to be the major challenge for soldiers clearing the trench. The process of turning a corner was carefully choreographed so they could move quickly around it and kill any enemies waiting on the other side without bumping into each other or getting their weapons tangled up in the confined environment.

When the team approached a corner, two soldiers took the lead, calling instructions to each other, then charging around the bend, sending a volley of shots from their M-16 rifles into a target and popping a yellow balloon representing an enemy soldier&#8217;s head.

As soldiers moved along the trench, their leader blew a whistle signaling a second team to enter behind them.

The process of turning corners and firing, whether there was a target or not, was repeated several times with more complex maneuvers at T- and Y-junctions.

Soldiers also practiced covering for each other in case their weapons malfunctioned.

At each turn a team member stayed behind to guard against enemies attempting to infiltrate from outside the trench. When the first team ran out of soldiers, the second team took over, until, about 330 feet down the trench, they could go no further.

After the training the soldiers took shelter from driving rain inside a small shed at the range.

The training had gone well, he told them.

Now that the soldiers know the basics of trench warfare, he added, they should develop their skills.

Sgt. Phillip Monge, a team leader, said his soldiers could improve their marksmanship in the trench.

The platoon commander, 2nd Lt. Mark Gross, said soldiers should make sure they do not telegraph their presence to the enemy by showing gun barrels before they move around corners.

&#8220;Where are the trenches located in Korea?&#8221; he asked. &#8220;Hilltops and ridge lines. We are going to be fighting up to those puppies. That is absolutely the next level. We are going to be tired, and we may not have all the dudes we came with.

&#8220;If it is up a hill, we may not be able to get the suppression from the Bradleys we want. I think you guys are getting the basics nailed down tight, but think about what it is really going to be like.&#8221;