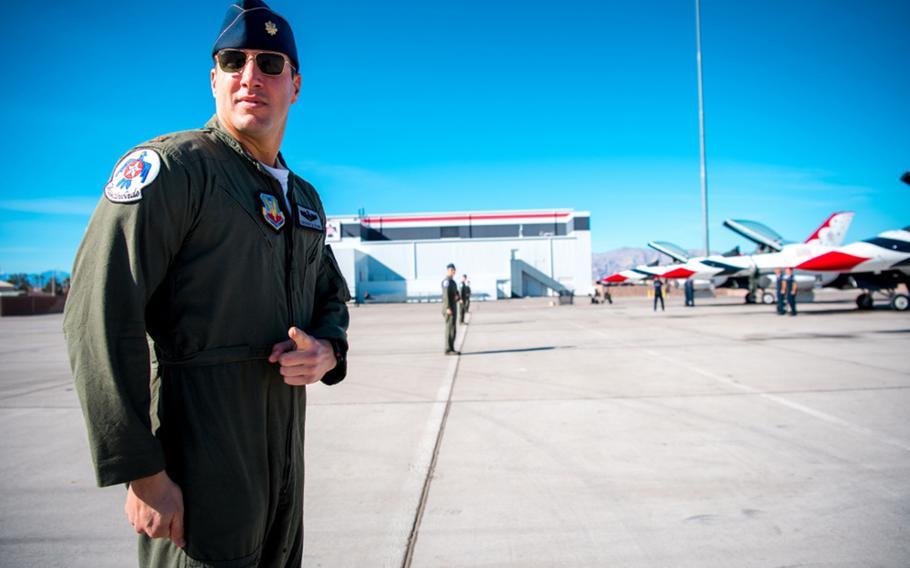 Skywriting that read, "Cajun, Our Hero," was among the recent tributes to Maj. Stephen Del Bagno, who died Wednesday when his F-16 Fighting Falcon crashed north of Nellis Air Force Base.

The Santa Clarita Valley Signal reported that the U.S. Air Force Thunderbirds were behind the skywriting. Del Bagno, whose call sign was “Cajun,” lived in Valencia, Calif. He was recently promoted to major and was entering his first season as part of the elite Thunderbirds demonstration team, according to his Air Force bio. He was flying the Thunderbirds’ No. 4 plane and was the slot pilot for the 2018 season, meaning he flew his plane just behind the lead aircraft and between two others in the team’s tightly packed diamond formation.

Del Bagno, 34, was also a consultant for the upcoming "Captain Marvel" movie, which features Brie Larson as Air Force officer-turned-superhero Carol Danvers. Larson tweeted that he was "a brilliant pilot and an even better person."

Marvel Studios, which is producing "Captain Marvel," tweeted, "We will miss him greatly; he'll always be part of the team."

Gov. Brian Sandoval of Nevada ordered flags to be flown at half-staff on Friday to honor Del Bagno.