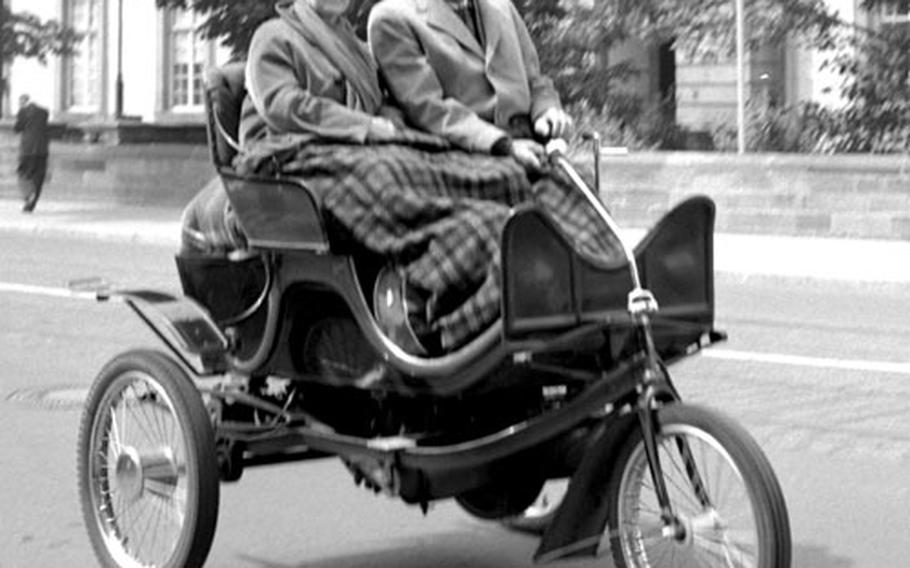 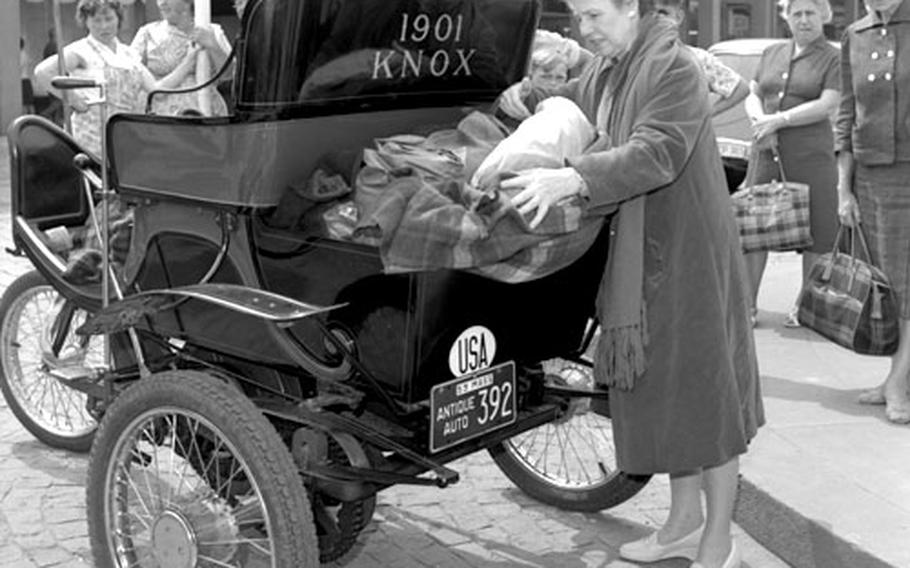 Buy Photo
Luggage is carried in a small open trunk and beneath the seat. (Dale Whitney/Stars and Stripes) 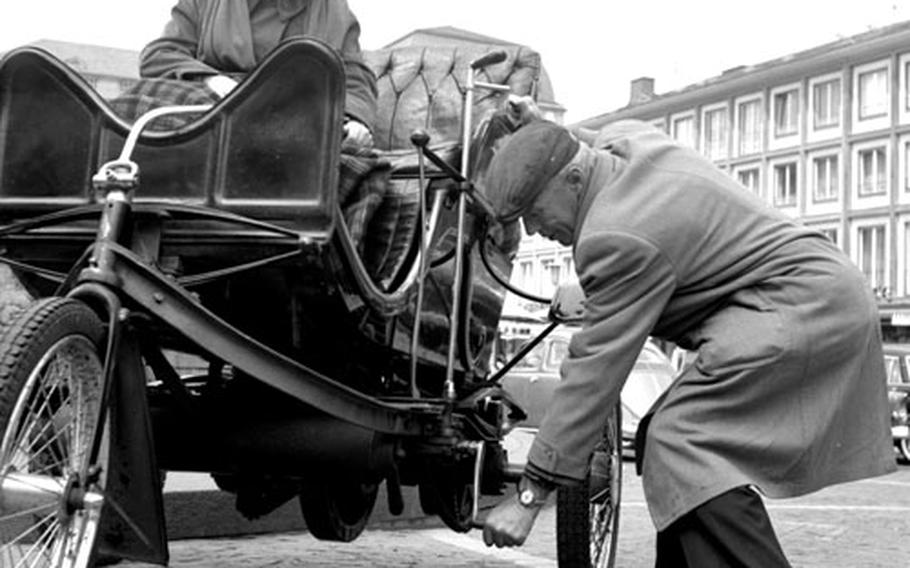 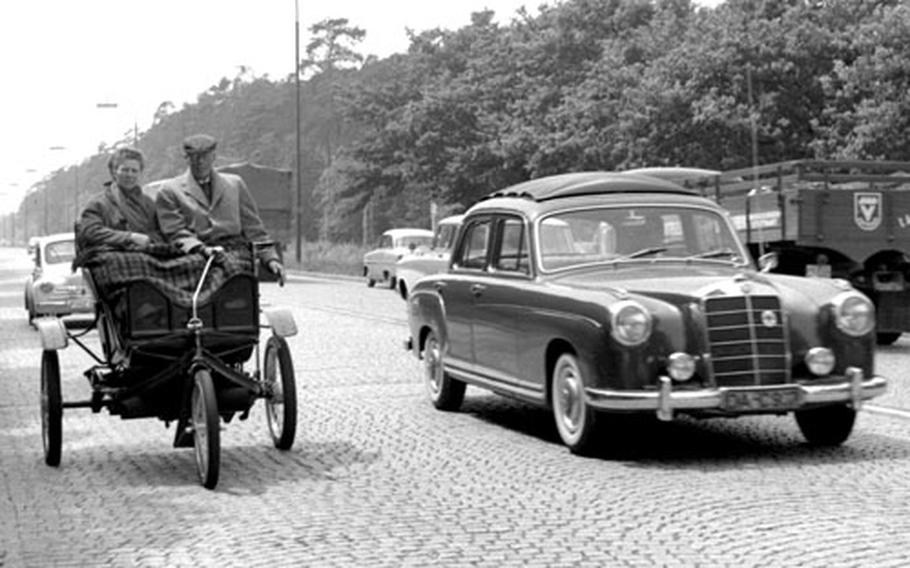 Buy Photo
Modern vehicles roar past Roger and Elsie Johnson of Hadley, Mass. and their 1901 Knox in West Germany in June, 1960. (Dale Whitney/Stars and Stripes) 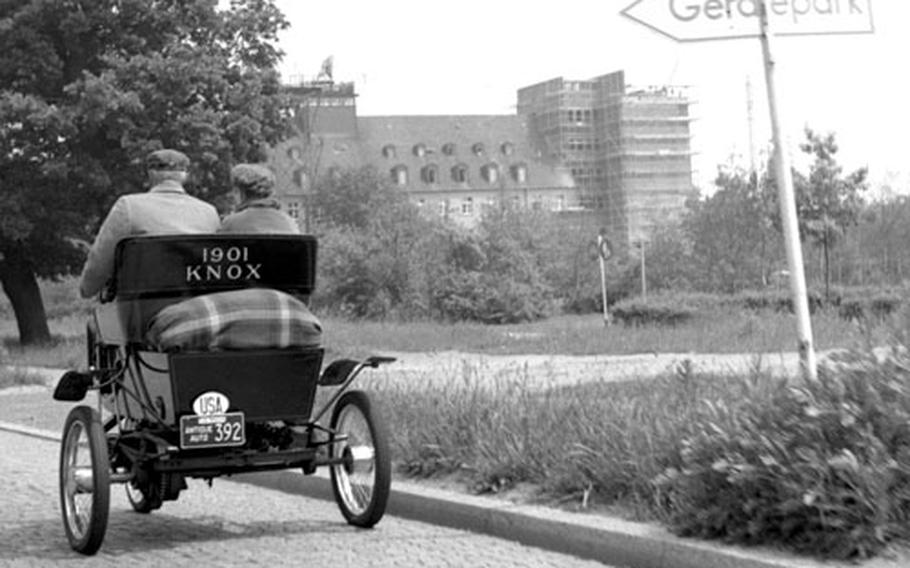 Buy Photo
Roger and Elsie Johnson of Hadley, Mass. in their 1901 Knox in West Germany in June, 1960. (Dale Whitney/Stars and Stripes)

IF YOU ARE worrying about the power brakes and power steering on your 1960 model super chrome Belchfire 12 and wondering whether or not you can get enough coupons to travel from Germany to Italy in a gas-eating monster that gives about 10 miles to the gallon, it might be a pleasant relief to consider for a moment Roger Johnson and his wife, Elsie, who are making a leisurely 7,000-mile trek through Europe in a 1901-model one-cylinder antique Knox auto.

As they happily drive their lever-steered gas buggy across the Continent, they give onlookers the happy thought that a good name for the couple would be "The Joyous Johnsons."

They move along at a fairly steady 18 mph, a speed which is slow enough for pedestrians to stop, stare, smile, and wave happily. Roger and Elsie smile and wave back in return.

Believed to be the only car of its kind in the world that is still fully operational, the auto was one of 100 built in 1901 by the Knox Auto Mfg Co., of Springfield, Mass.

"I know of five others in museums but I have never heard of another still running," said Johnson, who, at 58, still wears a look of boyish enthusiasm when he talks about his car.

The Johnson travel saga really started in 1933, when he first laid eyes on the ancient auto. "It took me 18 years of persuasion to get the owner to part with it. Then it took another three years of careful work to restore it to working order. So, it was 21 years after I first saw it that we took our first ride it it," Johnson said.

The purchase price and cost of refurbishing remain Johnson's secrets. "But I have been offered two new Cadillacs on a swap deal which does not interest me," he added.

Their current itinerary started at Cherbourg, France, on May 23, when they landed from the Queen Mary. From there they drove across France and Belgium to Luxembourg. Then down through Germany to Heidelberg and Strasbourg.

"We will take a train from there down to Marseille where my brother will meet us with his yacht and then we will sail back up to Strasbourg via the Rhone, Saone and Doubs rivers and some canal passages to Basel. From there we will sail down the Rhine to Strasbourg, arriving there about June 28," Johnson said.

His younger brother is Capt Irving Johnson, USNR, author, geographer and explorer, who has sailed seven times around the world. Four of the voyages were made in the New England brigantine Yankee and were extensively covered in National Geographic Magazine. His current vessel is a 58-foot ketch built especially in Holland for the purpose of sailing Europe's inland waterways.

Picking up the car again at Strasbourg, the Johnsons plan to drive east to Vienna and Yugoslavia and thence across northern Italy into Spain and Portugal and from there back to Paris and Cherbourg where they will catch the Queen Elizabeth westbound to New York on Sept. 15.

On their previous tour of Europe and a. trip from Massachusetts to Florida, plus participation in various antique car rallies, the Johnsons put more than 10,000 miles on the old car.

The car has two speeds forward and no reverse. "We don't need reverse gear because we can turn around in a nine-foot circle. And from Cherbourg to Germany we have not had to shift to low gear at any time. We move along pretty steadily at 18 miles an hour, on the level, up hill and down grade," Johnson explained.

The power plant is an eight-horsepower "porcupine" engine. The name comes from the fact that there are 1,818 4-inch long threaded pins sticking out from it to radiate the engine heat as the car moves along.

The boys on Madison Avenue had not yet become the apostles of merchandising when ad copy for the Knox was written at the turn of the century. The advertising slogans for the primitive car read, "Complete, graceful appearance in front, like a bicycle," "no visible exhaust," "no odor," and "always level, similar to a three-legged stool."

Around Hadley, Mass., where the Johnsons live, he is referred to by the local small fry as "Grandpa Nohands," because he may occasionally be seen riding an old fashioned high wheel bicycle in that manner. The old bike is one of more than 100 that he owns, and his collection is considered to be one of the most important in the world. "That's how Walt Disney described it when he made a movie of the collection," Johnson said.

Unlike the owner of today's garish chrome-plated automotive monsters, Johnson's repair needs are relatively simple. "We carry an extra spark plug and a couple of valves. If any major difficulty comes up we may have to go to a machine shop and have a part made, but that's not hard to do."