Time slows to a crawl in the Camp Hansen brig 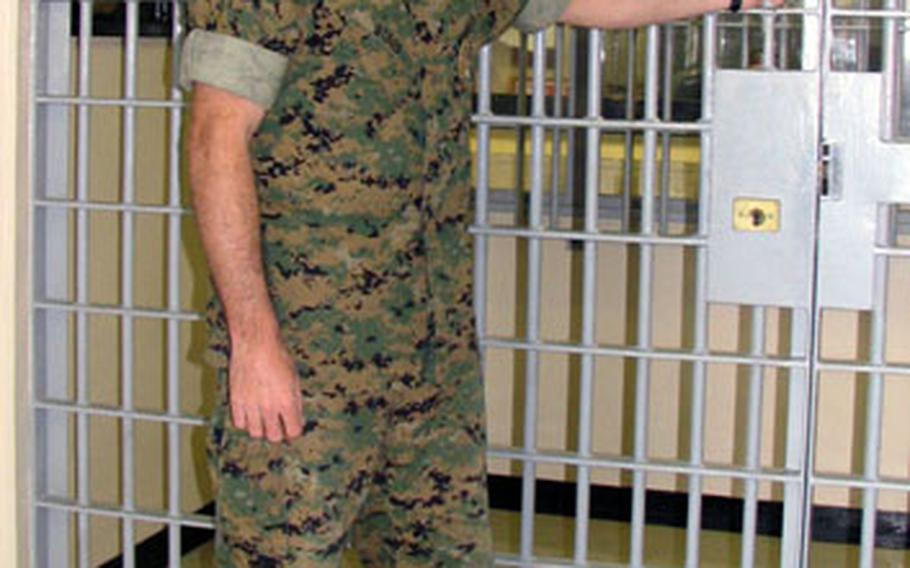 Chief Warrant Officer 3 Joseph Stines, commander of the Joint Forces Brig on Camp Hansen, says the brig is as much a deterrent for servicemembers who might one day break the law as it is a punishment for those who already have. (David Allen / S&S)

Chief Warrant Officer 3 Joseph Stines, commander of the Joint Forces Brig on Camp Hansen, says the brig is as much a deterrent for servicemembers who might one day break the law as it is a punishment for those who already have. (David Allen / S&S) The interior of a cell at the Camp Hansen brig leaves little room to roam. (David Allen / S&S)

CAMP HANSEN, Okinawa &#8212; Take it from &#8220;Inmate&#8221; Angeles, the Joint Forces Brig on this sprawling Marine base is not the place you want to be spending your days.

Or your long, long nights.

And that&#8217;s exactly the message Chief Warrant Officer 3 Joseph Stines, the unit&#8217;s commanding officer, wants to convey. The existence of the brig is meant to be as much a deterrent for servicemembers who might one day break the law as a punishment for those who already have.

&#8220;The brig is here to protect the public from crime by safely and securely handling criminal offenders while providing offenders opportunities for self-improvement and increasing the chances that they will become productive and law-abiding servicemembers or citizens,&#8221; Stines said during a recent interview with brig staff and the inmate.

That&#8217;s the official statement. Basically, the brig provides the setting for some &#8220;tough love&#8221; for servicemembers awaiting trial or sentenced to less than a year.

It&#8217;s a no-frills lockup in which an inmate gets three hot meals a day and a single 6-by-8-foot cell with a metal toilet, desk, sink and rack. A window with two narrow slits overlooks a patch of grass.

The inmates&#8217; world is a &#8220;pod&#8221; of cells, two tiers of nine cells each with a common area in the center. The entire area is visible to guards in a booth in the central corridor and by video cameras.

And it&#8217;s a state of being where every privilege has to be earned &#8212; even the opportunity to leave the cell and mix with the other inmates.

Inmate Angeles (the ground rule for the interview was that he was to be identified by the name used for him in the brig &#8212; no first names) was a petty officer 3rd class. He was a dental technician before he developed a gambling problem and was convicted of passing bad checks and stealing from the base exchange. In December 2004, he was sentenced to 18 months confinement, reduced to E-1 and given a dishonorable discharge.

He said his downfall was the slot machines in the base clubs on Okinawa. He started writing bad checks to cover his losses, then devised a scam with a friend to steal money from the exchange. Eventually, he lost his home in Los Angeles, the city where his wife and two children still live. Brig time came as a wake-up call.

&#8220;When I first got here, I was in solitary confinement for three days. It was pretty hard. All I had to read was the Bible and the rules and regulations of the brig. I had to take a test on the rules before they would let me in the general population.&#8221;

Stines said the inmates are placed in solitary for three days to help them adjust to their new lives. They are strip-searched and kept under guard 24 hours a day until they learn the rules and regulations.

How they are treated when they are released to the general brig population, Stines said, depends on their history &#8212; the crimes they committed and the length of their sentences.

Besides working either as messmen or in the woodshop, the inmates attend workshops tailored to address their crimes &#8212; sex crimes, larceny, substance abuse and one for violent offenders.

All privileges are earned.

&#8220;It took me eight months to advance enough that I could get an extra five minutes longer on my phone calls. I am really worried about my wife and kids, so it&#8217;s good I am allowed to speak with her for 10 minutes now. Oh, and I also got to wear a watch.&#8221;

There&#8217;s very little chance to get into trouble. Every movement by an inmate is controlled and observed. The officer-to-inmate ratio is close to one-to-one. The brig, a facility for people serving short sentences &#8212; a year is normal &#8212; has a 192-bed capacity but 120 inmates is considered the maximum it can hold.

Last year the brig, which has a staff of 60 personnel, including 50 Marines, averaged 45 inmates per day.

Stines said they don&#8217;t see the gangs, drugs and violence that are common in civilian jails in the States.