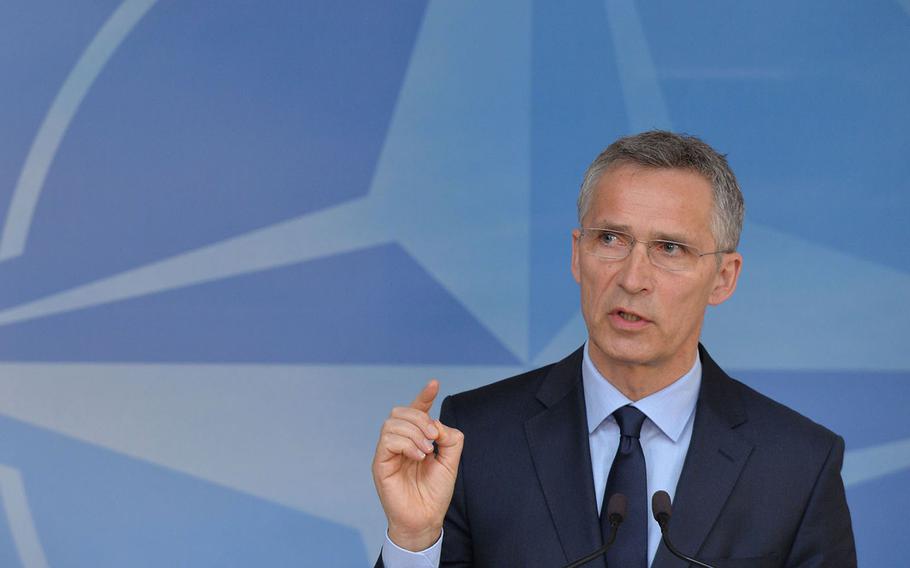 NATO Secretary-General Jens Stoltenberg talks to the media ahead of the meetings of NATO Foreign Ministers in Brussels, Belgium, Friday, March 31, 2017. (Courtesy of NATO)

Secretary of State Rex Tillerson on Friday delivered a two-month deadline for NATO states to craft plans for boosting defense spending to agreed levels, but stopped short of spelling out what the consequences will be if allies fall short.

Germany balked at the demand, setting up a potential conflict between Berlin and Washington ahead of a major alliance summit in May.

NATO is under pressure to cough up more cash for defense and to demonstrate more willingness to commit forces to operations as the alliance attempts to adapt to the demands of U.S. President Donald Trump, who has questioned the military pact’s relevance.

“Our goal should be to agree at the May leaders’ meeting that by the end of the year all allies will have either met the pledge guidelines or will have developed plans that clearly articulate how, with annual milestone progress commitments, the pledge will be fulfilled,” Tillerson told NATO ministers.

Echoing previous comments by Trump and Defense Secretary Jim Mattis, Tillerson said Washington can no longer shoulder a disproportionate share of the security burden in Europe.

“Allies that do not have a concrete plan to spend 2 percent of GDP on defense by 2024 need to establish one now,” Tillerson said. “Allies that have a plan to reach the 2 percent guideline need to accelerate efforts and show results.”

NATO members face intense pressure from the Trump administration to speed up the rate of defense expenditures while also committing more to the fight terrorism emanating from the Middle East and North Africa.

“This is about cash, capabilities and commitments,” NATO Secretary-General Jens Stoltenberg said at the start of the one-day meeting in Brussels of allied foreign ministers.

Tillerson, who arrived in Brussels Friday, delivered the administration’s demands for more spending during closed-door meetings.

Last week, the ministerial in Brussels was hastily rescheduled to accommodate Tillerson, who had planned to skip discussions with allies in favor of staying in Washington for high-level talks with visiting Chinese leaders in early April. Tillerson’s absence was seen as a possible snub, particularly in light of Trump’s many criticisms of NATO, which he has described as “obsolete.”

The 68-year-old pact scrambled to reschedule the conference, a move Stoltenberg said shows the “commitment of all allies.”

Allies on Friday discussed how to establish national spending plans, which would establish a clear road map for reaching a NATO benchmark that calls for allies to dedicate 2 percent of gross domestic product to the military. Stoltenberg said NATO will examine establishing national plans that spell out how allies will meet 2 percent spending pledges and how to invest funds to ensure capabilities are improved.

While all members are expected to reach that goal by 2024, Trump wants allies to hit the target faster, which is likely to be a source of tension.

German Foreign Minister Sigmar Gabriel said the 2 percent mark should be regarded as a “guideline” rather than a requirement.

“We respect the 2 percent guideline, but we should not move the goalposts,” Gabriel said in a statement. “It was formulated in Wales (the 2014 NATO summit) as a guideline and not a goalpost. Defense spending and military means are important to provide for more security, but they are by far not the only means.”

Friday’s meeting is a prelude to NATO’s summit in late May, which Trump will attend and which will probably involve an unveiling by allies of how they intend to meet defense spending obligations.

When it comes to expenditures, Stoltenberg said it is important that allies invest in capabilities NATO needs. Spending was creeping up among most of NATO’s 28 members even before Trump took office. “We need to keep up the momentum and keep the pledge we have all made,” he said.

Currently, just five members — the U.S., Estonia, Britain, Greece and Poland — now meet the 2 percent target. Europe’s economic powerhouse Germany spends about 1.2 percent of GDP on defense. Canada, which has one of the strongest armed forces in the alliance, dedicates just 1.02 percent.

Some members have questioned the 2 percent benchmark for measuring the effectiveness of an alliance military, which has been described as an arbitrary figure. Greece, for instance, dedicates more of its budget to the military than Canada. But Canadian forces are more capable and conduct more high-profile missions, such as leading a multinational battalion in the Baltics.

Tillerson flew into Brussels from Turkey, a NATO member that has been heavily engaged in the fighting against the Islamic State group in neighboring Syria and Iraq. The militants have taken responsibility for a number of terrorist acts in Europe, but until Trump assumed office there was little pressure on NATO to be more active in countering them.

“NATO has untapped potential to do more,” Stoltenberg said.