Thousands of Iraqi Christians to celebrate another Easter away from home 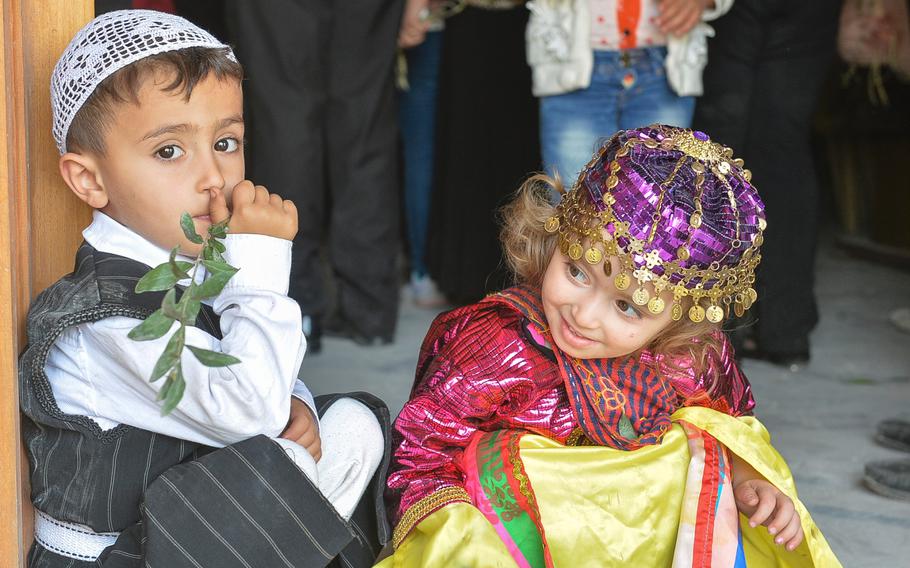 Buy Photo
Iraqi children in traditional outfits play with olive branches in the doorway of the burned-out Church of the Immaculate Conception during Palm Sunday Mass in the town of Qaraqosh on April 9, 2017. Scores of former residents returned to the town for the mass and a prayerful procession for the first time since 2014 and nearly six months after Islamic State militants were forced from the area. (Chad Garland/Stars and Stripes)

Buy Photo
Iraqi children in traditional outfits play with olive branches in the doorway of the burned-out Church of the Immaculate Conception during Palm Sunday Mass in the town of Qaraqosh on April 9, 2017. Scores of former residents returned to the town for the mass and a prayerful procession for the first time since 2014 and nearly six months after Islamic State militants were forced from the area. (Chad Garland/Stars and Stripes) Buy Photo
A Christian militia member stands guard during a Palm Sunday procession in the Iraqi town of Qaraqosh on April 9, 2017. The annual procession, which recalls Jesus entrance into Jerusalem before his crucifixion, had not been celebrated in the town since 2014, after Islamic State militants swept into the country and took the area. Iraqi forces freed the town in October 2016. (Chad Garland/Stars and Stripes) 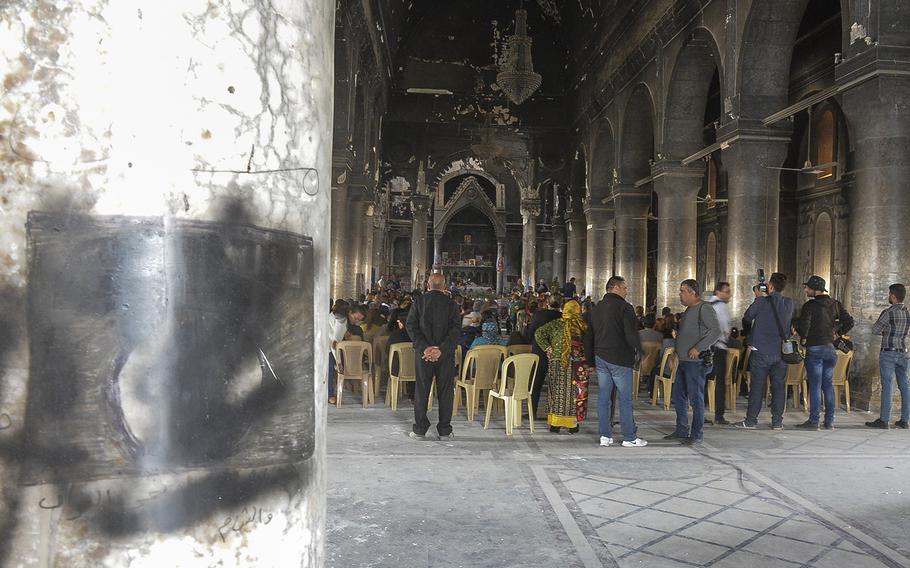 Buy Photo
Spray paint covers a drawing of the Islamic State flag on a pillar inside the Church of the Immaculate Conception in Qaraqosh, pictured here during Palm Sunday mass on April 9, 2017. Scores of former residents filled the church for mass, some wearing colorful traditional outfits, though the building remains largely how ISIS left it — battered and blackened by smoke — when they fled Iraqi forces in October 2016. (Chad Garland/Stars and Stripes) Buy Photo
Karwan Mamand Ibrahim, chief of police in Ankawa, Iraq, is pictured in his office on Tuesday, April 11, 2017. Ibrahim's officers patrol the streets of the Christian suburb of the Kurdish region's capital and coordinate with Kurdish security police to thwart terrorist threats. (Chad Garland/Stars and Stripes) Buy Photo
Archbishop Yohanna Petros Moshe, Syriac Catholic archbishop of Mosul, leads a prayer from atop a portico at Saint John's Church in Qaraqosh as Christians who returned to the of the village for a Palm Sunday procession join in from the ground on April 9, 2017. (Chad Garland/Stars and Stripes) 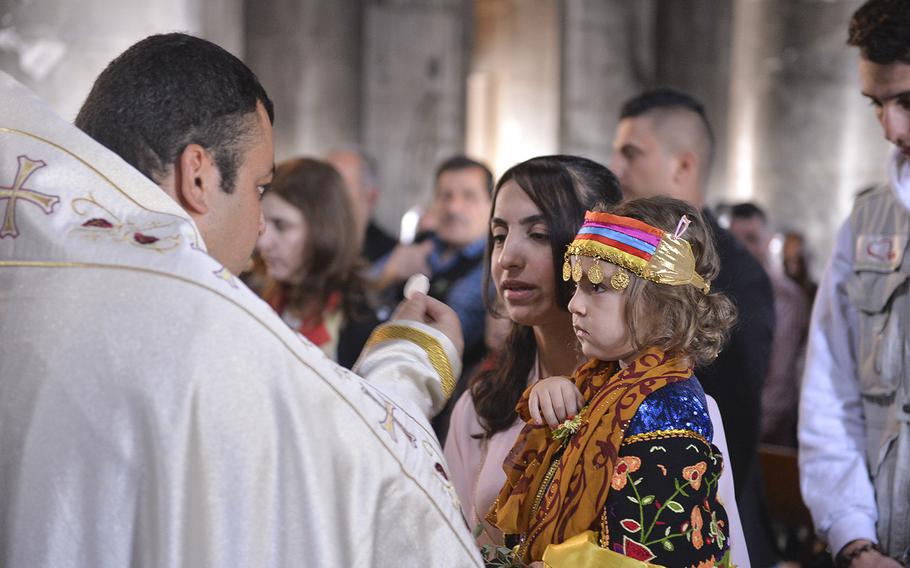 Buy Photo
A woman receives the eucharist during Palm Sunday Mass at the Church of the Immaculate Conception in Qaraqosh on April 9, 2017, while a child in a traditional outfit looks on. Former residents of the town, forced to fee when Islamic State militants advanced in August 2014, returned briefly to mark the holy day, but few have returned permanently since it was freed from ISIS in October 2016. (Chad Garland/Stars and Stripes) Buy Photo
Naja Rafu, who fled his hometown of Qaraqosh when Islamic State militants swept in in 2014, is pictured in his makeshift vegetable stand in Ankawa, the Christian suburb of the Iraqi Kurdish region's capital of Irbil, on Wednesday, April 12, 2017. (Chad Garland/Stars and Stripes) 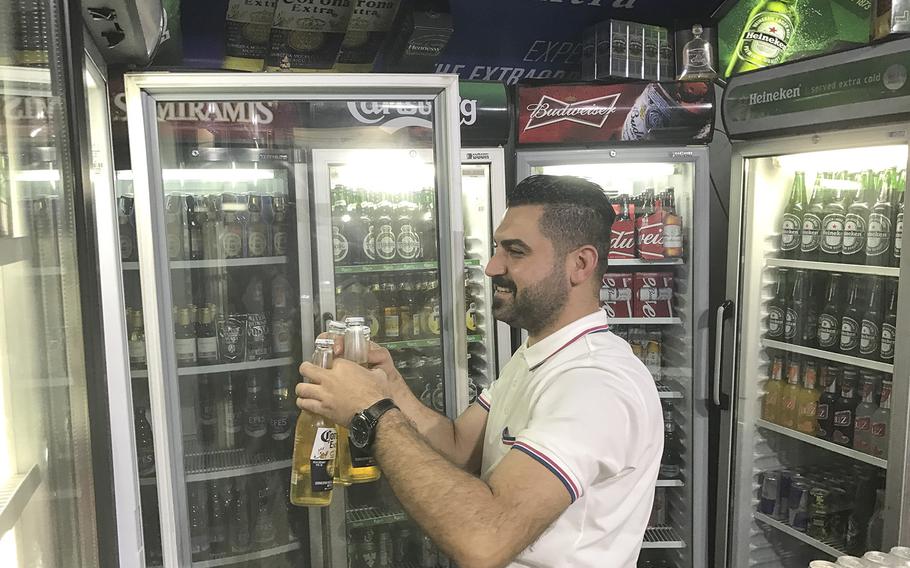 Buy Photo
Christo Duhoka restocks Coronas in the beer fridge at an Ankawa liquor store he runs with his brothers on Wednesday, April 12, 2017. Thousands of Christians have taken refuge in the town since 2003, especially since the rise of the Islamic State in 2014, and Duhoka said the influx of customers has helped keep his business afloat despite a declining economy. (Chad Garland/Stars and Stripes) Buy Photo
Crowds of Iraqi Christians wait to enter the grounds of Saint Joseph's Cathedral in Ankawa for a Palm Sunday vigil celebration on Saturday, April 8, 2017. The predominantly Christian suburb of Kurdistan's capital of Irbil grew rapidly with an influx of families fleeing the Islamic State in 2014 and nearly three years on remains a center of life for many who have not returned to their former hometowns. (Chad Garland/Stars and Stripes) 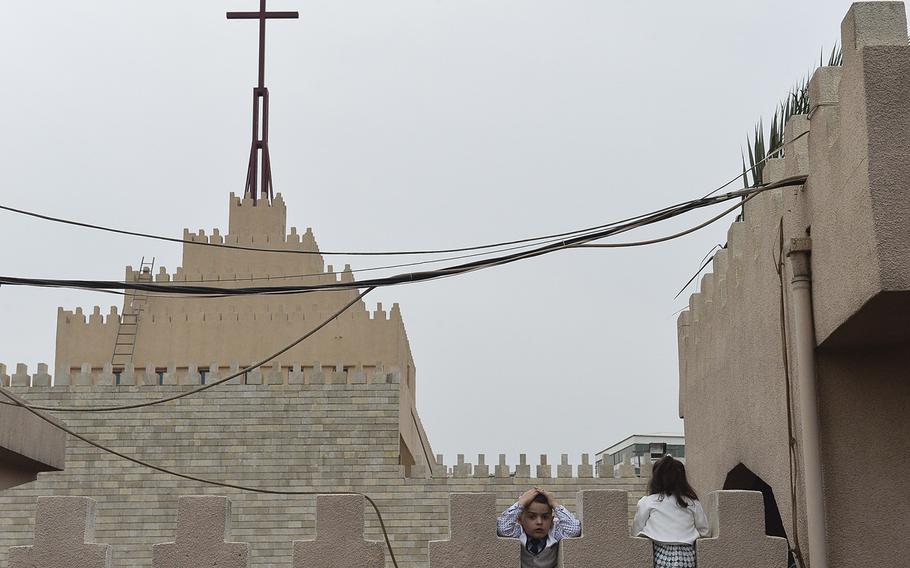 Buy Photo
A boy and girl sit on the wall of the Saint Joseph's Cathedral in Ankawa, Iraq, during a Palm Sunday vigil celebration on Saturday, April 8, 2017. Hundreds of Iraqi Christians processed through the streets of this suburb of the Kurdish region's capital city of Irbil, singing and praying. (Chad Garland/Stars and Stripes) 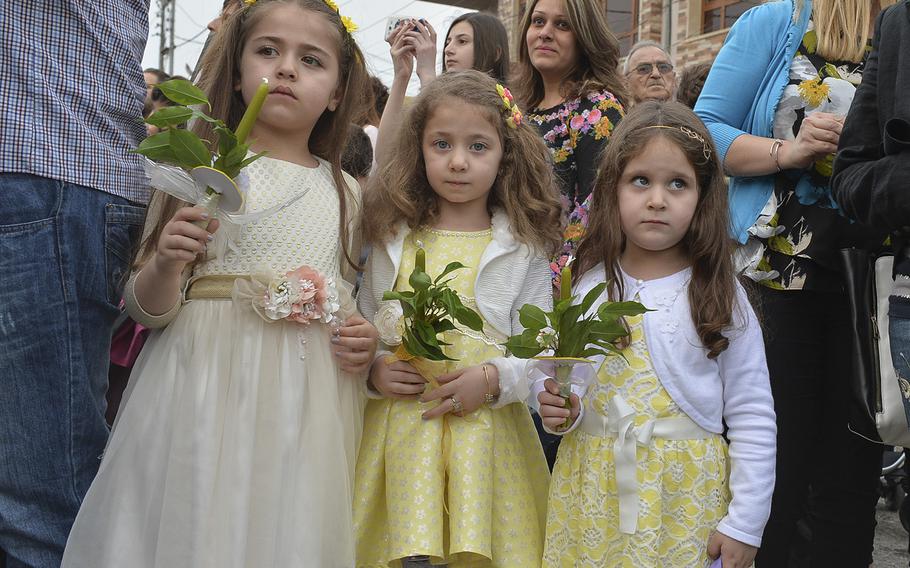 Buy Photo
A trio of Iraqi Christian girls carry candles and branches during a Palm Sunday vigil procession in Ankawa, a Christian suburb of the Kurdish region's capital, on Saturday, April 8, 2017. Hundreds of Christians filed the streets of the city, singing and praying, during the afternoon event and then filed into the churchyard of the Saint Joseph's Cathedral for a celebration that stretched into the evening. (Chad Garland/Stars and Stripes)

ANKAWA, Iraq — A giant statue of Mary, the mother of Jesus, stands with open arms in a park that divides one of the busier roads in this suburb of the Kurdish region’s capital, where a U.S. consulate is located and American military helicopters often cross the skies. It’s an appropriate symbol for this Christian enclave, where some 12,000 displaced Iraqi Christian families have taken refuge.

Long a bastion for the followers of Jesus, it became their de facto center of gravity practically overnight in August 2014, when thousands fled here from Qaraqosh to escape the Islamic State’s advance.

ISIS was routed from Qaraqosh, once Iraq’s “Christian capital,” roughly five months ago. But as many Christians here prepare to spend their third Easter in exile, it remains unclear when, if ever, they will return home.

“I will never go back,” said Naja Rafu, a vegetable vendor who runs a makeshift produce stand under a tarpaulin in Ankawa. His home in Qaraqosh was destroyed, and his savings have been used up in the years since he and his family fled, so he has no hope of rebuilding. Besides, he said, “It’s safer here.”

Christian communities in Iraq, among the oldest in the world, date to the first century, and many speak a dialect of Aramaic, the language Jesus is believed to have spoken. Before the 2003 U.S. invasion, there were roughly 1.5 million Christian inhabitants, including several prominent scholars, businessmen and senior politicians in the secular Baathist regime.

Those numbers have declined precipitously because of years of anti-Christian violence and persecution by al-Qaida, Wahhabite groups and other Sunni extremists. Fewer than 300,000 remained before the Islamic State group’s military victories nearly three years ago, and many more have fled since then.

Roughly a decade ago, the population of Ankawa was about 15,000. Church officials estimate five times as many live here now, thanks to the influx of Christians who have taken flight from areas around Baghdad and Mosul since 2003 and especially since 2014.

The population boom has turned Ankawa into a hive of activity. Dozens of shops like Rafu’s line the streets, many made with tarpaulins bearing the symbols of the U.N. refugee agency. The vendors, who hail from Qaraqosh, sell fruit, vegetables, candy, cosmetics, clothing, toys and more.

On the weekends, sidewalks teem with perfumed and coiffed young people, and the streets are clogged with traffic. Women in head scarves and modest black abayas intermix with others wearing tight jeans and no head coverings.

The shops, cafes, hookah lounges and restaurants remain open until late at night. In the area’s many social clubs, men crowd the tables, smoking hookah. They pick at salads and appetizers, called meze, while some play cards or a bingo-like game.

As a nightlife destination and a refuge for the country’s dwindling Christian population, security here is a main concern, officials say.

The suburb is also home to other potential targets of violence, including the U.S. consulate and several hotels where foreign journalists and aid workers frequently stay. It’s just minutes from the Irbil airport, where U.S. and coalition troops are based.

Citing security concerns, Karwan Mamand Ibrahim, Ankawa’s chief of police, was mum about the size of his force, but he said his officers work closely with the Kurdish region’s security police and intelligence agency, known as Asayish, to thwart terrorist plots. His officers are Kurdish Muslims, he said, but they are respectful of religious differences and often attend Christian events as part of their duties.

Yet some threats slip through. In April 2015, a suicide car bomb detonated outside a cafe near a consulate here, killing three civilians and wounding five others. ISIS claimed responsibility for the attack.

Not all the Christians in Ankawa want to stay, and church officials have begun encouraging them to return to their battle-scarred villages where storefronts are scorched, buildings are smashed and church towers are cracked or crumbling.

Haibad Hannah Polis, who lives in Ankawa now, said she was ready to return to Qaraqosh permanently. She was among scores of former residents who returned briefly on Palm Sunday to celebrate mass and march in a procession recalling Jesus’ entrance into Jerusalem.

“We are tired there (in Ankawa),” she said, dressed in a traditional outfit worn by many of the townspeople for the special occasion.

But some Christians who want to return are wary, fearing they may face sectarian violence if more isn’t done to secure the region, which lies largely outside Kurdistan’s current protective boundaries. Ibrahim, the police chief, said he thinks they will be safer under the Kurdish flag.

But they have no choice except to return, said Mumtas Bashir Estefu, a locksmith who now lives in Ankawa but went back to Qaraqosh for the Palm Sunday rituals.

“Our grandfathers had nothing when they built these churches,” he said. “We cannot abandon them.”