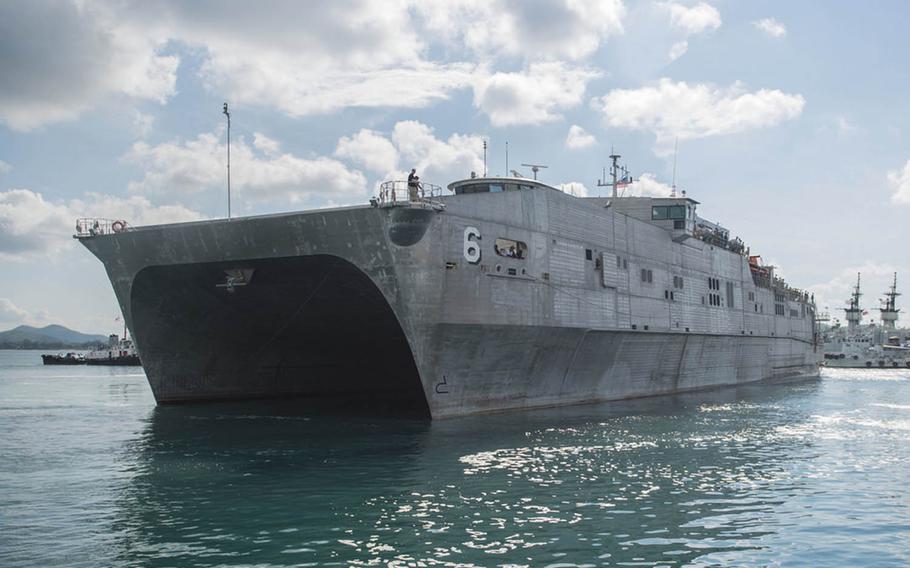 The USNS Brunswick arrives in Thailand for the Pacific Partnership exercise, Saturday, May 19, 2018. (Joshua Fulton/U.S. Navy)

Military relations between the United States and Thailand continue to deepen despite the ruling Thai junta’s repeated postponement of free elections.

For the first time, Thailand is hosting Pacific Partnership, U.S. Pacific Fleet’s annual mission that began in 2006 to assist regional governments with preparedness for disaster relief and humanitarian assistance.

The 2018 mission kicked off this week aboard the expeditionary fast transport ship USNS Brunswick in Sattahip, Thailand.

More than 130 military personnel from the U.S., United Kingdom and Australia will work with counterparts in the fields of medicine and dentistry at the Queen Sirikit Naval Hospital, the Navy said in a statement.

“We are here because, like our U.S. colleagues, we are committed to increasing multilateral cooperation and partnership across the region,” UK Royal Navy Capt. Peter Olive, deputy mission commander of Pacific Partnership 2018, said in the Navy statement.

Thai Gen. Prayut Chan-o-cha led a military coup in 2014 that overthrew the civilian government. U.S. officials quickly began pressing the junta for a speedy return to elected government, but promised elections have been postponed several times.

Elections have now been promised for early 2019, but “there remains a significant chance the military will delay the election again,” wrote Joshua Kurlantzick, a senior fellow for Southeast Asia at the Council on Foreign Relations, in a March blog post.

The junta appears to be delaying elections until its leaders are confident that the political party Pheu Thai could not win a majority, Kurlantzick wrote. That party descends from an earlier iteration that supported former Prime Minister Thaksin Shinawatra, who was overthrown by an earlier military coup in 2006.

The U.S. has walked a tightrope in the wake of the coup, expressing concern that elections be held quickly but at the same time trying to avoid pushing its oldest treaty ally in the Pacific into China’s arms.

The U.S. military participation in the venerable Cobra Gold exercise was complicated this winter when Thailand invited Myanmar’s military, which the United Nations has accused of ethnic cleansing of Rohingya Muslims.

Despite that, the U.S. sent about 6,800 personnel to Cobra Gold in February. That was almost double the number that participated in 2017, according to Reuters.