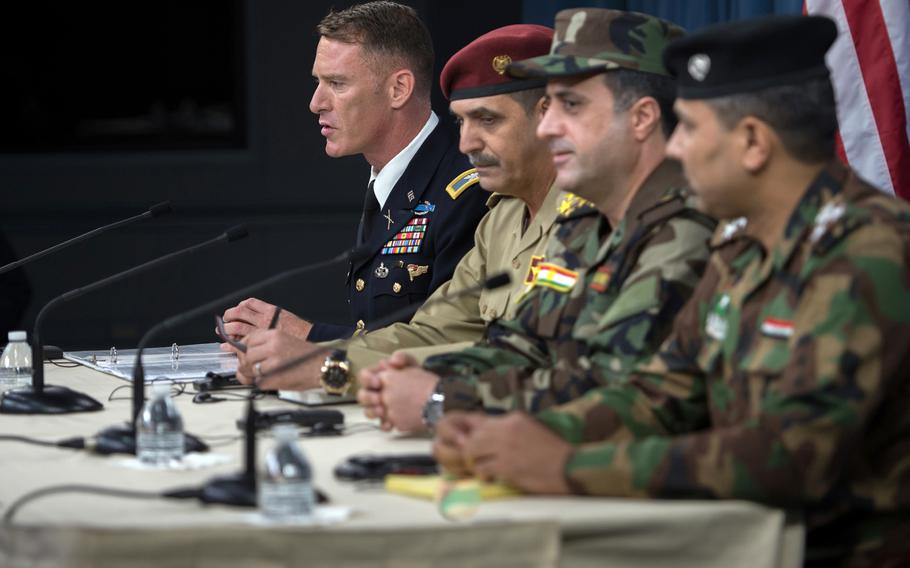 Operation Inherent Resolve spokesman Army Col. Ryan Dillon, left, and spokesmen for the Iraqi security forces brief members of the media on the Liberation of Mosul at the Pentagon, July 13, 2017. On Tuesday, Oct. 17, Dillon noted that clashes on Monday between Iraq's Kurdish forces and government-controlled Iraqi forces distract from the mission to defeat Islamic State. (Amber I. Smith/U.S. Army)

WASHINGTON —Tensions between Iraq’s Kurdish forces and the nation’s government-controlled military, which resulted in brief clashes over disputed territory in northern Iraq on Monday, distract from the mission to defeat Islamic State, a U.S. military spokesman said Tuesday.

Army Col. Ryan Dillon, a Baghdad-based spokesman for the anti-ISIS coalition, downplayed the deadly engagement south of Kirkuk early Monday morning as a “miscommunication” between the two forces, both of which have been trained by U.S. and coalition troops during the last three years. Dillion added the two sides were able to transition control of areas in and around Kirkuk peacefully Monday and Tuesday.

The Kurdish Regional Government had controlled Kirkuk, an oil-rich city of some 1 million Kurds, Arabs, Turkmen and Christians in northern Iraq, since driving ISIS from the city in 2015. Baghdad has long sought to regain control of the city, and tensions grew following a recent non-binding Kurdish independence referendum resulting in the Iraqi government’s demanding the Kurds leave the city by Oct. 15.

Dillon said he was aware of only the one outbreak of fighting early Monday morning, despite reports of other violent skirmishes in the area.

“We have seen a lot of rhetoric and we’ve seen a lot of things that have come out of social media and traditional media that we have not seen through official reporting,” he told reporters Tuesday at the Pentagon. “That one incident was the only altercation, armed conflicted, exchange of fire that we know about.”

Dillon warned the tensions between the two sides are disrupting the plan to defeat the last of ISIS in territories along the Euphrates River near Iraq’s border with Syria.

“Our [coalition] leaders are talking with our counterparts in both the Iraqi security forces and the [Kurdish] peshmerga and are urging all sides to avoid escalation,” he said. “The tensions distract from our unified fight against ISIS, which remains a very real threat here in Iraq.”

Neither Dillon nor some Pentagon spokesmen could immediately say how further fighting between the two sides would impact U.S. and coalition support for the groups, including the providing of weapons and equipment.

The U.S. military does not have advisers embedded with the Kurdish peshmerga fighters and the Iraqi security forces around Kirkuk, Dillon said. But the coalition has continued to train troops from both groups. To date, it’s trained some 119,000 Iraqi security forces, including about 23,000 peshmerga troops, he said.

The Iraqi security forces are preparing to launch final attacks on ISIS in the towns of Al Qaim and Rawa in western Anbar province. So far, Dillon said the tensions in northern Iraq between Kurds and the government has not directly impacted those operations. But he said Iraqi military planners have had to divert their focus from only fighting ISIS to prepare contingency plans in case the tensions continue to grow.

“The focus is not there on that [ISIS] problem set as it was prior to the referendum,” Dillon said. “… At levels that have to do with planning [for] the defeat of ISIS that has been distracted, and as we look forward toward even after the military defeat of ISIS in Rawa and Al Qaim, there is still going to be work to be done.”