Soldiers render honors to those who lost their lives during and since the attack on the World Trade Center and the Pentagon during a ceremony at FOB Wolverine, Sept. 11, 2011, at a ceremony commemorated the 10th anniversary of the attacks. A new report claims that the Taliban?s shadowy founder Mullah Omar died near the American base and not in Pakistan. (Jennifer Andersson/U.S. Army)

Soldiers render honors to those who lost their lives during and since the attack on the World Trade Center and the Pentagon during a ceremony at FOB Wolverine, Sept. 11, 2011, at a ceremony commemorated the 10th anniversary of the attacks. A new report claims that the Taliban?s shadowy founder Mullah Omar died near the American base and not in Pakistan. (Jennifer Andersson/U.S. Army) 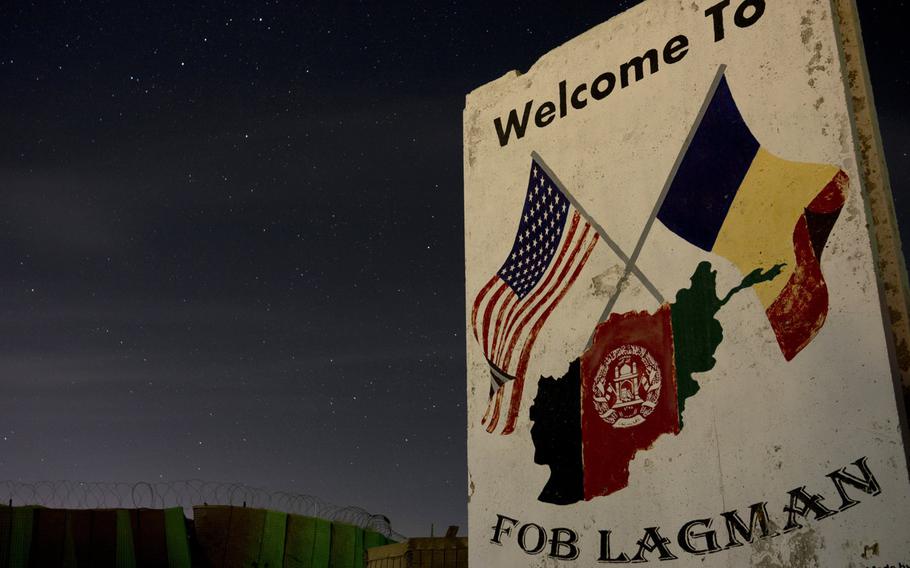 The welcome sign of Forward Operating Base Lagman, Afghanistan. A new report claims that the Taliban's shadowy founder Mullah Omar lived near the base and died near another American base and not in Pakistan. (Tim Morgan/U.S. Army) In this undated image released by the FBI, Mullah Omar is seen in a wanted poster. A new report claims that the Taliban?s shadowy founder died near an American base, FOB Wolverine in Afghanistan, not in Pakistan. (FBI/AP)

KABUL, Afghanistan — The Taliban have confirmed that their shadowy founder died just a few miles from an American base in Afghanistan — and not in Pakistan, as generally believed — even as the Kabul government rejected the claim, which is at the center of a new report from a New York-based research center.

Experts and intelligence analysts have long believed Mullah Mohammad Omar fled to Pakistan after the U.S. invaded Afghanistan in 2001. From there, according to the consensus view, he at some level directed Taliban operations until his death in 2013.

But the Taliban’s one-eyed leader actually might have remained in Afghanistan and relinquished direct command of the group, according to the report.

The report’s author, long-time Afghanistan researcher Bette Dam, relied on interviews with Mullah Omar’s bodyguard as well as members of the Taliban and Afghan security agencies, she wrote. The report was published during the weekend by the Zomia Center, a research group affiliated with New America, a nonpartisan think tank in Washington.

Omar gave up control of the Taliban within days of their defeat and went into hermitic isolation in rural Zabul, an insurgent-friendly province on Afghanistan’s southern border with Pakistan. At various points, he lived in houses just miles away from forward operating bases Lagman and Wolverine, said the report, titled “The Secret Life of Mullah Omar.”

Omar did not trust Pakistan, and would not go there even for medical help, it said.

Dam’s book about her own efforts to track down Mullah Omar, “Searching for an Enemy,” was published in Dutch in February.

In the Zomia Center report, she disputes the U.S. narrative that Mullah Omar actively commanded Taliban forces while cooperating with al-Qaida militants in Pakistan. The mullah had almost no interaction with other people until his death, except for a few scares in which American troops failed to find his hidden room, the report said.

It noted that the New York Times and Politico had also reported on speculations that Mullah Omar had died in Afghanistan.

The report has received mixed reactions in Kabul, where officials have long blamed Islamabad for insecurity in the region.

A former high-ranking member of the Taliban said he has not read the report, but its findings fit what he has heard.

“Mullah Omar did not die in Pakistan,” said Hakim Mujahid, a member of High Peace Council of Afghanistan and former Taliban representative to the United Nations during their regime. “He suffered somehow but he didn’t go anywhere out of the country and died there.”

The Taliban founder didn’t go to any other country “for a single day,” the Taliban said in a statement Monday.

Members of the government in Kabul, meanwhile, have rejected the report’s claims.

“We strongly reject this delusional claim & we see it as an effort to create & build an identify for the Taliban and their foreign backers. We have sufficient evidence which shows he (Mullah Omar) lived & died in #Pakistan,” presidential spokesman Haroon Chakhansuri said on Twitter.

The idea that Mullah Omar would stay in a country swarming with more than 140,000 U.S. and NATO troops seems unlikely, David Petraeus, a former CIA director and a onetime U.S. military commander in Afghanistan and Iraq, told the Wall Street Journal.

For its part, the U.S. has long accused Pakistan of harboring the Taliban, including its deadly Haqqani network, and has made foreign aid to the country contingent on a crackdown. Mullah Omar’s successor was killed on the Pakistan side of the border in a 2016 drone strike, and last year, Washington cancelled about $300 million in aid after President Donald Trump criticized Islamabad for its counterterrorism record.

The Taliban founder’s hidden life in Afghanistan, however, suggests a staggering U.S. intelligence failure regarding the group with whom it is now negotiating an end to the war, now in its 18th year, the report’s author said.

“Remarkably little is known about the men on whom the U.S. is pinning its hopes for peace,” Dam wrote, referring to ongoing talks between U.S. and Taliban representatives, including Taliban co-founder Mullah Abdul Ghani Baradar, in Doha, Qatar.