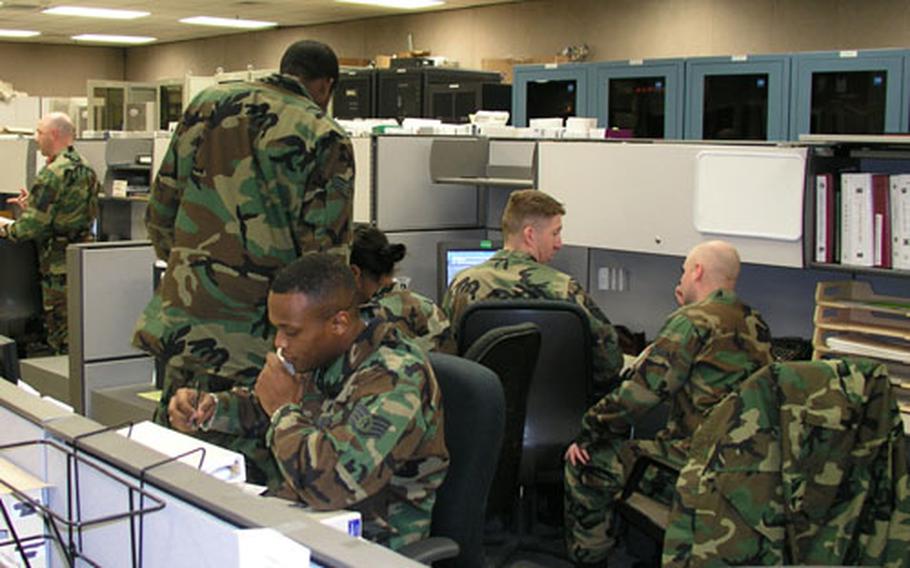 At Osan Air Base in South Korea, airmen of the 51st Communications Squadron staff the base&#39;s network control center, keeping tabs on a wide range of computer-related matters, including watching for viruses. At center of photo, on phone, is Staff Sgt. Jabbar Williams, checking the status of a computer security matter. (Franklin Fisher / S&S)

At Osan Air Base in South Korea, airmen of the 51st Communications Squadron staff the base&#39;s network control center, keeping tabs on a wide range of computer-related matters, including watching for viruses. At center of photo, on phone, is Staff Sgt. Jabbar Williams, checking the status of a computer security matter. (Franklin Fisher / S&S) 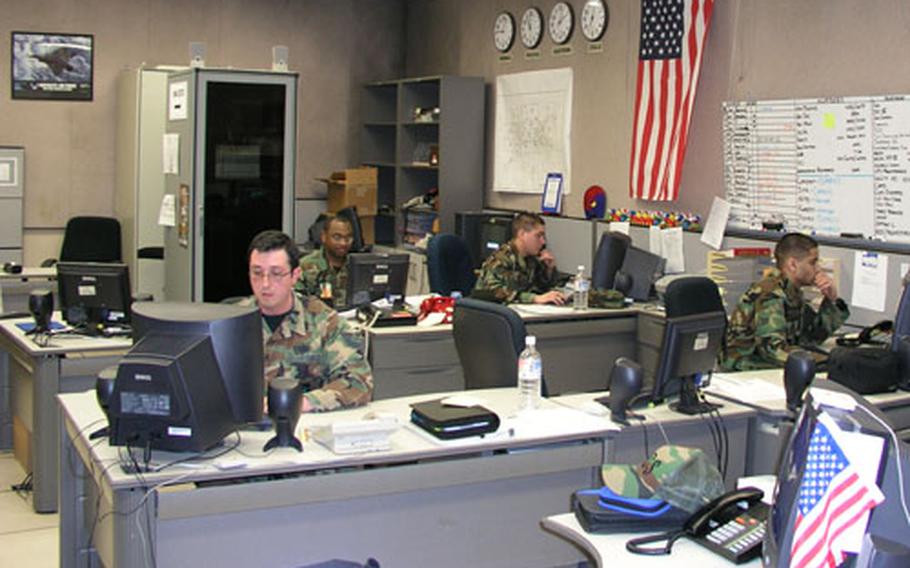 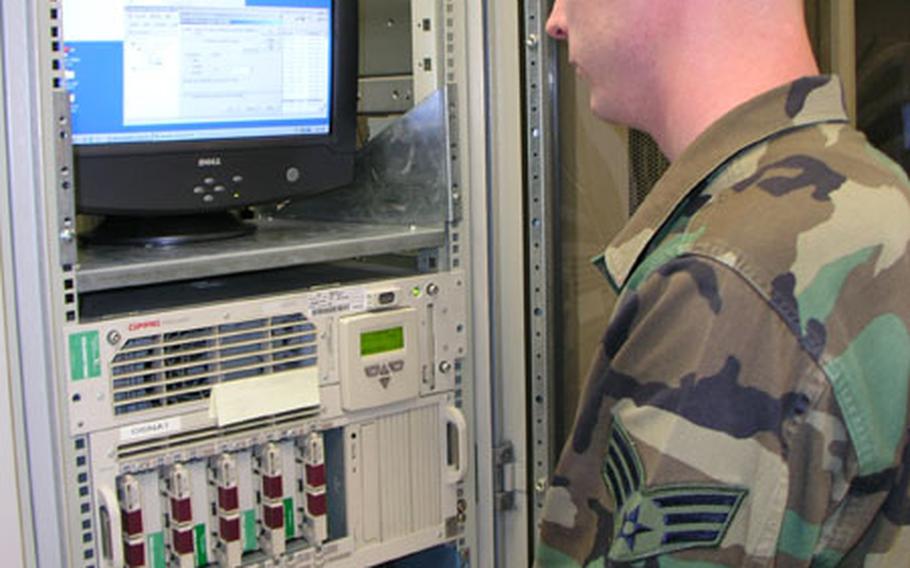 Senior Airman Michael Sauve checks the computer antivirus system that guards computers at Osan Air Base in South Korea. The U.S. military relies heavily on antivirus software in its efforts to shield computers from harmful viruses. Sauve is with the 51st Communications Squadron, part of the 51st Fighter Wing. (Franklin Fisher / S&S)

U.S. military bases throughout the Pacific report fending off tens of thousands of attacks every day &#8212; from computer viruses that range from potentially pesky to possibly crippling.

Computer viruses have done no major harm to networks &#8212; yet, Pacific officials say. But all installations see viruses as a hazard demanding &#8217;round-the-clock vigilance, which devours staff time.

If not quickly checked, viruses can steal information from computer drives and even turn English text to a garble of computer characters, said Sgt. Nicholas Ybarra of Kunsan Air Base&#8217;s 8th Communications Squadron. At worst, viruses can bring networks to a virtual standstill.

Computers use binary code &#8212; combinations of ones and zeroes &#8212; to store information, Ybarra said. &#8220;A virus ... will just go in and randomly change the ones and zeroes on an infected system ... it can target just certain system files that the computer needs to run correctly.

Worms often target big commercial Web sites in an effort to shut them down.

Worms &#8220;usually try to copy themselves a lot over a network and usually try to eat up as much bandwidth as possible by sending commands to servers to try to get in,&#8221; said Maj. Scott Solomon, commander of the 51st Communications Squadron&#8217;s Information Systems Flight at Osan Air Base, South Korea. &#8220;The Code Red worm is a good example of this. This worm breaks in a security hole in Microsoft [Internet Information Server]. When the worm successfully gets in, it will try to go into other servers and work stations from there.&#8221;

Among newer worm viruses showing up, said experts at Pacific installations, is the mass-mailing worm W32.Netsky.x@mm and W32.Netsky.y@mm. Both can scan for e-mail addresses on all hard drives of an infected computer; the worm then e-mails itself to those addresses, according to Carl M. Ancheta, director of computer systems division at Sasebo Naval Base, Japan.

A single virus can have various characteristics, Solomon said.

Many viruses share one design factor, however: They try to entice computer users to commit those two mouse clicks essential to opening the attached files containing the viruses.

It opened with a small color photo of a woman whose left shoulder and back are uncovered, giving the appearance that she&#8217;s nude or scantily clad. The accompanying text reads, &#8220;I am a honest, kind, loving, with good sense of humor &#8230; etc., looking for true love &#8230; or maybe for pen friend. I like cats. Attached file tells everything. Kind regards, Christina.&#8221;

But the words are bait for a trap that snaps when a recipient clicks on the attachment, unleashing a &#8220;Trojan Horse&#8221; virus that will scour the computer for addresses or other information to send back to people who may use it to build lists for spamming.

But even their fun can bear a hefty price tag: military staff time.

&#8220;You have your cost in manpower to clean up the virus mess if it actually gets into your system,&#8221; Solomon said.

Prevention lies in personnel such as Senior Airman Michael Sauve at Osan Air Base, South Korea. In the base&#8217;s bustling network control center, he keeps watch over activity that&#8217;s occurred on Osan&#8217;s computers.

But if the viruses get through, Sauve takes immediate steps to remove them himself, by keyboarding the needed computer commands.

If that doesn&#8217;t work, the next step is to disconnect the computer from the network.

Such monitoring duties are part of the daily electronic vigil the U.S. military maintains to guard its vital computer systems.

Two layers of virus protection are used at Misawa Air Base. The first is anti-virus software on the base&#8217;s mail servers.

Though the chances of a virus getting through are slim, said base officials, some can breach the first protective layer. If that happens, it&#8217;s up to the second protective barrier &#8212; the anti-virus software on individual computers &#8212; to spot the virus and clean or quarantine the infected files.

Servicemembers and civilians working with the military can be provided a free copy of Norton antivirus software for their home computers, officials said; they may request it through their organizations.

But much also depends on the individual computer user, experts said.

Keeping anti- virus software updated is crucial, especially for servicemembers who do some of their computer work at home, he said.

Indeed, servicemembers&#8217; home computers are often the source of infections in the military&#8217;s computers.

Here are some tips on avoiding computer virus problems, provided by the 51st Communications Squadron, part of the 51st Fighter Wing at Osan Air Base, South Korea:

&#8226; Keep your anti-virus and other software current. Install updates and upgrades right away

&#8226; For added protection, all floppy disks should be scanned before use.

&#8226; Virus-check all downloaded files, including sound and video files, as well as e-mail attachments.

&#8226; To prevent the possibility of rapidly spreading a virus, avoid downloading to a network or shared drive.