Spreading the gospel of America 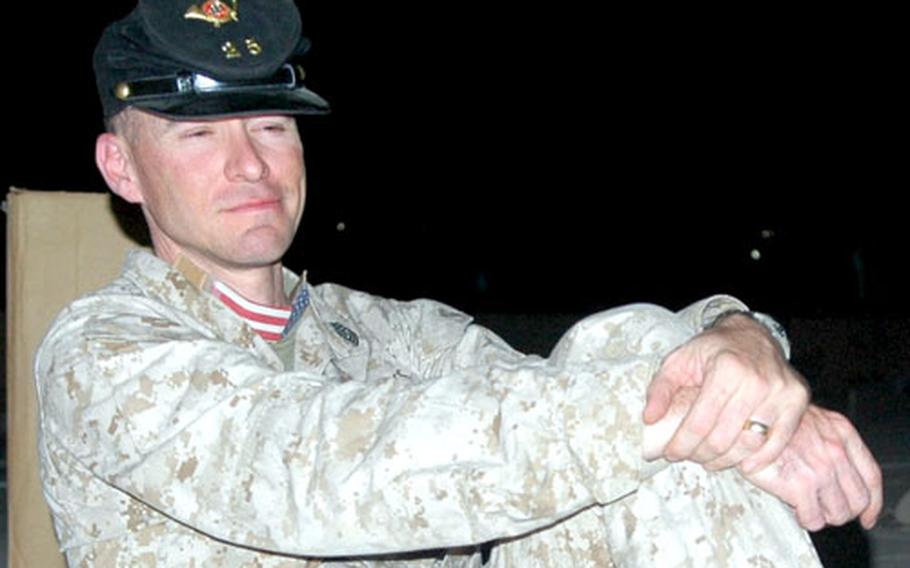 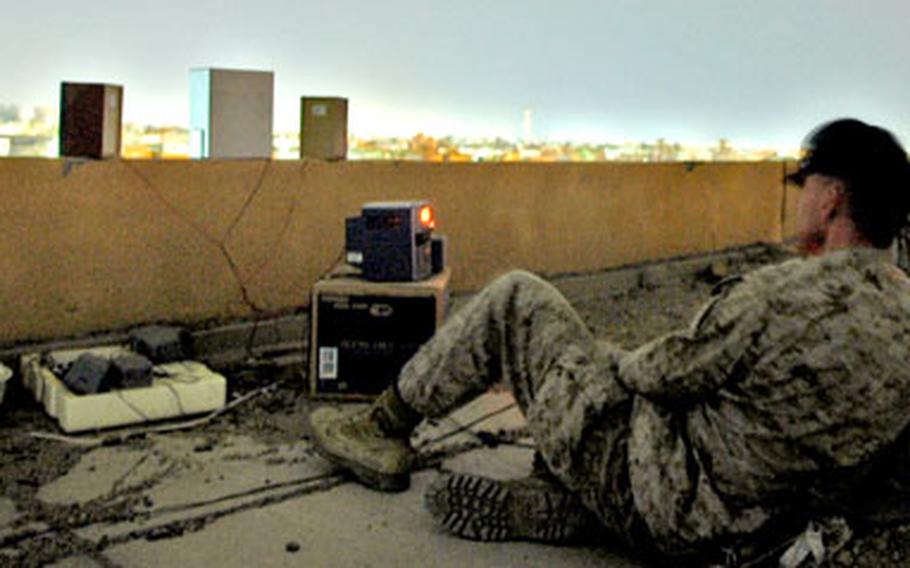 FALLUJAH, Iraq &#8212; Sure, there are no atheists in foxholes, but just what&#8217;s a modern-day grunt supposed to believe in when all the foxholes have been replaced by Humvees?

For roughly three months now, Grainger has been the chief prophet, preacher and proselytizer of a tongue-in-cheek creed he invented to boost the spirits of Marines locked in an increasingly frustrating &#8220;three-block war&#8221; in this onetime insurgent stronghold.

Ever since the Enfield, Conn., resident held his first &#8220;service&#8221; on the rooftop of a bullet-pocked and sandbagged outpost in downtown Fallujah, the gospel of Americantology has spread like white phosphorous through the ranks of Company C, 1st Battalion, 25th Marine Regiment, &#8220;New England&#8217;s Own.&#8221;

The reserve infantry unit, which is based in Plainville, Conn., falls under the command of Regimental Combat Team 5 and is responsible for keeping the peace in some of the worst neighborhoods this city has to offer. Marines here have fallen under attack from snipers, roadside bombs, rocket-propelled grenades and mortars.

&#8220;We&#8217;ve seen it all,&#8221; said Cpl. Jordan Pierson, 21, of Milford, Conn. Pierson himself earned a Purple Heart last month when an insurgent grenade exploded 10 feet away and sprayed him with shrapnel.

Americantology actually began as a spat between Grainger and higher-ups over whether or not the company could fly an American flag outside its base &#8212; a battered former government building dubbed &#8220;The Holiday Inn Express.&#8221;

Miffed that he couldn&#8217;t fly the American flag in Fallujah, Grainger began thinking about just how he and Company C could express their patriotism.

Grainger might tell you that Americantology&#8217;s patron saints are Wyatt Earp, Theodore Roosevelt and John Wayne, and that its gospel is the Red, White and Blue, but he doesn&#8217;t really talk much during services. Instead, he waits until nightfall, climbs a staircase to the roof, and uncovers a stereo and loudspeakers hidden beneath a cardboard box.

With occasional gunfire echoing in the distance and the Muezzin&#8217;s call to evening prayer ringing from the loudspeakers of nearby mosques, Grainger dons a Civil War era cap with Marine insignia and a faux priest&#8217;s collar decorated with the American flag.

Then, as a crowd of Marines plop down on the deck, Grainger places the stereo speakers on the roof&#8217;s ledge, aims them west toward the United States and hits &#8220;play.&#8221;

For the next hour, the sound system blasts an eclectic mix of patriotic hits and Marine favorites. There is of course the National Anthem, &#8220;Anchors Aweigh&#8221; and the Marine Corps Hymn, but there are also songs by Bruce Springsteen, Toby Keith, Neil Diamond, AC/DC (who are technically Australian), Lee Greenwood, and Ray Charles among others.

The services have been a big hit with the Marines.

Americantology has not been free of controversy, however.

Grainger, who writes daily e-mail dispatches to family members, unit supporters and newspapers back in the U.S., was criticized recently by a college professor in Connecticut, who accused him of being culturally insensitive.

The biggest sermon yet occurred on the day Abu Mussab al-Zarqawi &#8212; the leader of al-Qaida in Iraq &#8212; was hunted down and killed. As U.S. aircraft rained propaganda leaflets over Fallujah that evening, Grainger and his Marines used powerful psychological operations, or psyops, speakers to blast the sacred soundtrack across town.

As Company C&#8217;s first sergeant, it&#8217;s up to Grainger to keep tabs on the physical and mental well-being of his Marines. Having served a tour during the initial invasion of Iraq, Grainger said he was alarmed to see the toll that stress had taken on certain Marines.

&#8220;When I came back from Iraq the first time, we had staff sergeants who committed suicide for no explainable reason,&#8221; Grainger said.

Today, there is even more stress on Marines as they battle a foe that hides among the local population.

Ideally, the Americantology sessions are an opportunity for Marines to forget about Iraq for a while.