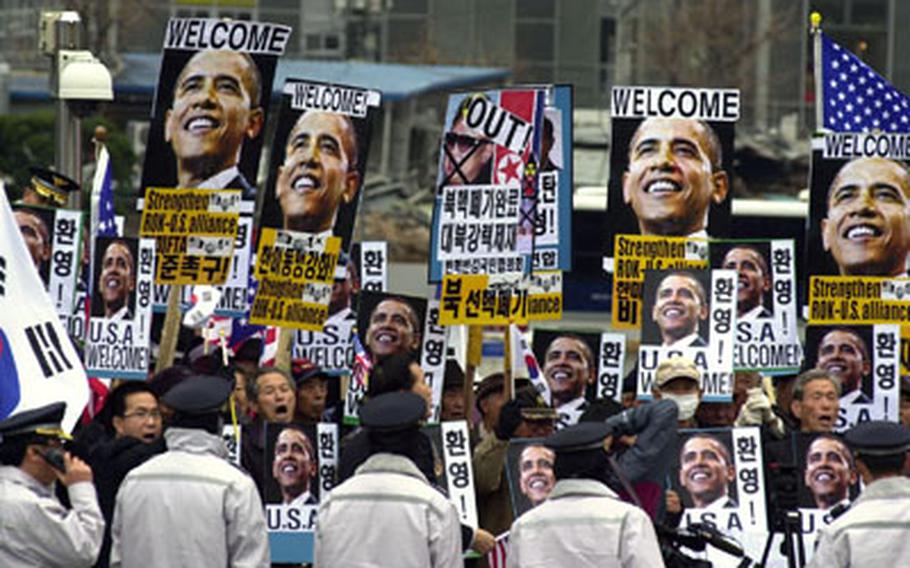 Thousands of people line the streets of downtown Seoul on Thursday to welcome President Barack Obama as he rides to a meeting with South Korean President Lee Myung-bak. (Jon Rabiroff / S&S)

Thousands of people line the streets of downtown Seoul on Thursday to welcome President Barack Obama as he rides to a meeting with South Korean President Lee Myung-bak. (Jon Rabiroff / S&S) 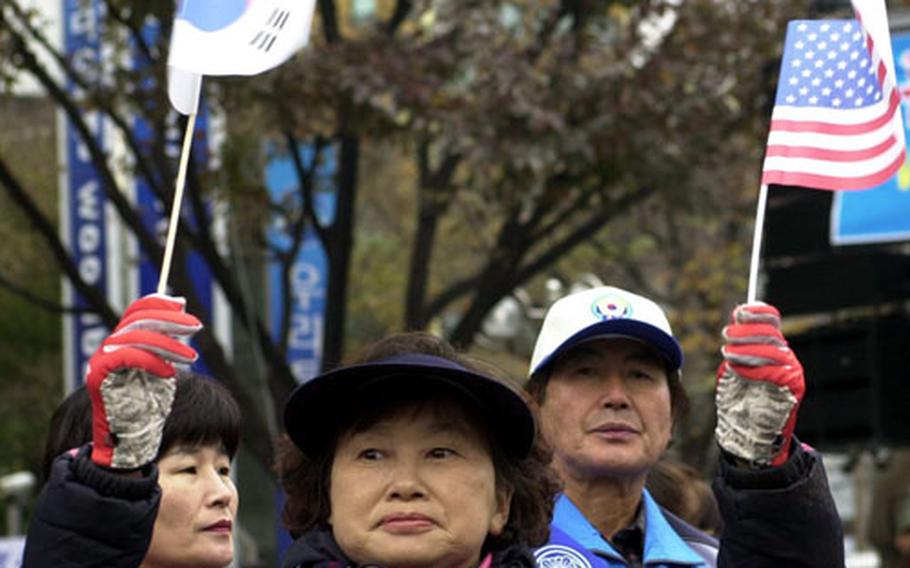 SEOUL &#8212; Thousands of South Koreans lined downtown streets Thursday to give President Barack Obama a rock-star-worthy welcome, complete with signs, flags and chants in support for the ongoing alliance between the two countries.

Meanwhile, in a neighborhood several miles away from Obama&#8217;s motorcade route, about 20 protestors occasionally tussled with police as they took issue with the president&#8217;s visit, South Korea&#8217;s plans to send troops to Afghanistan and the heavy-handed tactics they believe authorities used to stifle anti-American demonstrations this week.

After all the shouting was done and the placards were packed, Obama and South Korean President Lee Myung-bak held a joint televised press conference that, at least at the Texas bar and restaurant a block from the motorcade route, went virtually ignored by the two-dozen businessmen and women there on their lunch break.

Emotions and interest ran the gamut during Obama&#8217;s first whirlwind visit to South Korea, where the United States stations 28,500 troops largely as a deterrent to the ongoing threat posed by North Korea.

That commitment to the protection of South Korea is what brought Kim Su-im, 64, to the pro-Obama rally that welcomed the president&#8217;s motorcade.

"I will not forget the sacrificial friendship they showed to us for as long as I live," he said. "How could I not welcome President Obama from our blood-tied nation visiting our country?"

A few protesters were detained by police at the anti-American rally in a neighborhood near the site of the Obama-Lee summit, but no one was seriously injured in the scuffles.

Choi Young-cheol, 30, an organizer of the protest, said those on hand were upset about police tactics, South Korea&#8217;s plan to send troops to Afghanistan and Obama in general.

"He doesn&#8217;t think of stopping the war in Iraq or Afghanistan. How can this man be awarded a Nobel Peace Prize? He should have received a Nobel war prize."

Said protester Cho Ik-jin, 24: "People used to have a hopeful expectation about Obama, but he is not different from (former U.S. President George W.) Bush."

Over at Texas, the scene was pretty much business as usual.

Financial investment specialist Kim Sung-su was one of the many ignoring a live press conference with Obama and Lee on the restaurant&#8217;s television.

"I am too busy at work to pay attention to this kind of the news," he said. "I am not greatly interested, but I will check on it on the Internet news tonight."