Soldiers in Iraq send TV greetings to loved ones at home 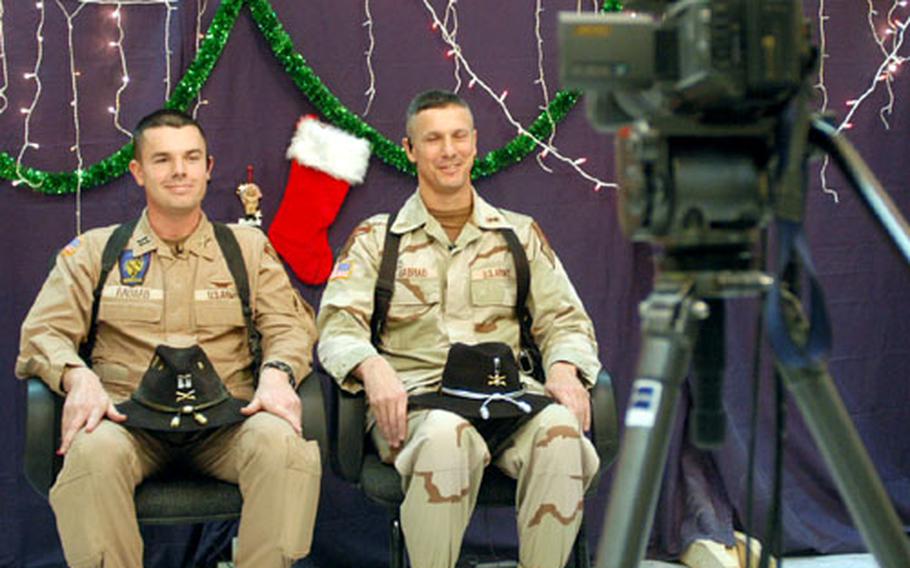 BAGHDAD &#8212; More than two dozen soldiers assigned to 1st Cavalry Division units got to send greetings to their loved ones on a variety of local and national TV news programs over the holiday weekend.

And a few got to see their relatives in the flesh.

Members of the division&#8217;s 122nd Mobile Public Affairs Detachment turned part of their at Camp al-Tahreer office into a remote TV studio, broadcasting live greetings to CNN, Fox News, the Today Show and local TV stations throughout the country.

Spc. Chad Wade of the 458th Engineer Battalion made a quick phone call home before his TV appearance.

Chief Warrant Officer 5 Paul Habhab and his son, Capt. Travis Habhab, reunited with their families on the &#8220;Today Show.&#8221;

The event was even more special, the Habhabs agreed, because they would get to see each other, something they only do every few months.

Paul is assigned to the division&#8217;s headquarters at al-Tahreer while his son, Travis, is an Apache helicopter pilot with Company B, 1st Battalion, 227th Aviation Regiment at Camp Cooke north of Baghdad.

The last time father and son saw each other was for Paul&#8217;s birthday in October.