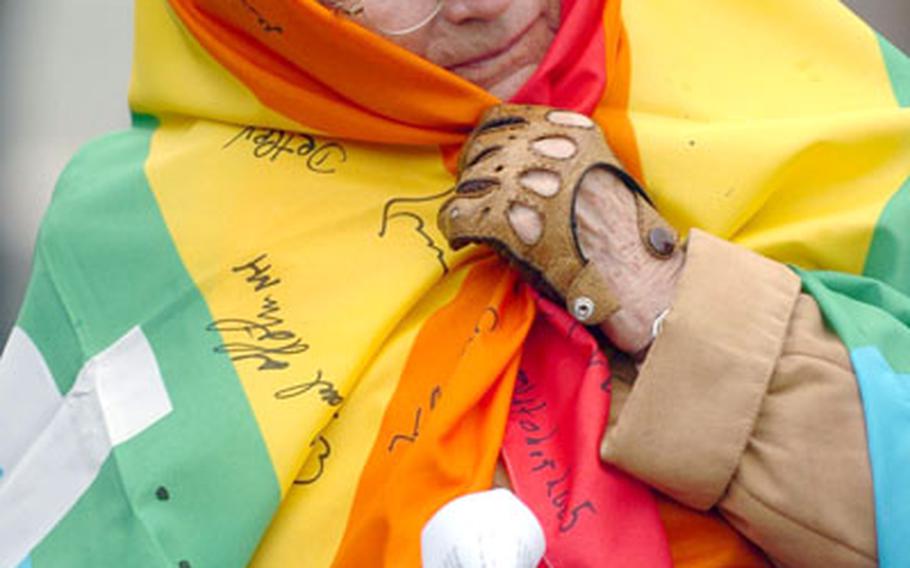 A elderly women wrapped in a peace flag sings a hymn outside Ramstein Air Base, Germany, on Saturday. Approximately 20 protesters gathered to voice opposition to the U.S.&#39;s involvement in Iraq. (Raymond T. Conway / S&S)

RAMSTEIN, Germany &#8212; Saturday&#8217;s anti-war protest outside Ramstein Air Base was notable for what did not happen.

Cindy Sheehan, the mother of a U.S. soldier killed in Iraq and the woman who protested last summer outside President Bush&#8217;s ranch, did not attend, even though weeks ago she was scheduled to participate in the event.

Also, only about 30 protesters marched with crosses and rainbow peace flags from the town of Landstuhl to outside Ramstein Air Base. Protest organizers originally estimated as many as 500 participants.

The event&#8217;s counterprotest, which took place nearby, drew a crowd of about 15 pro-American, pro-military men and women.

Cold weather and rainy skies were likely factors in the low turnout on both sides.

The unfriendly weather did not stop Robin Haas, a 21-year-old student in Mannheim, from attending the counterprotest.

Protest organizers said they assembled outside Ramstein Air Base because they would like to see more peaceful solutions to the world&#8217;s problems.

Shortly after the protesters gathered outside the air base, a motorist driving past screamed an expletive in English at the group as he waved his middle finger.