Serving up Christmas where it's needed 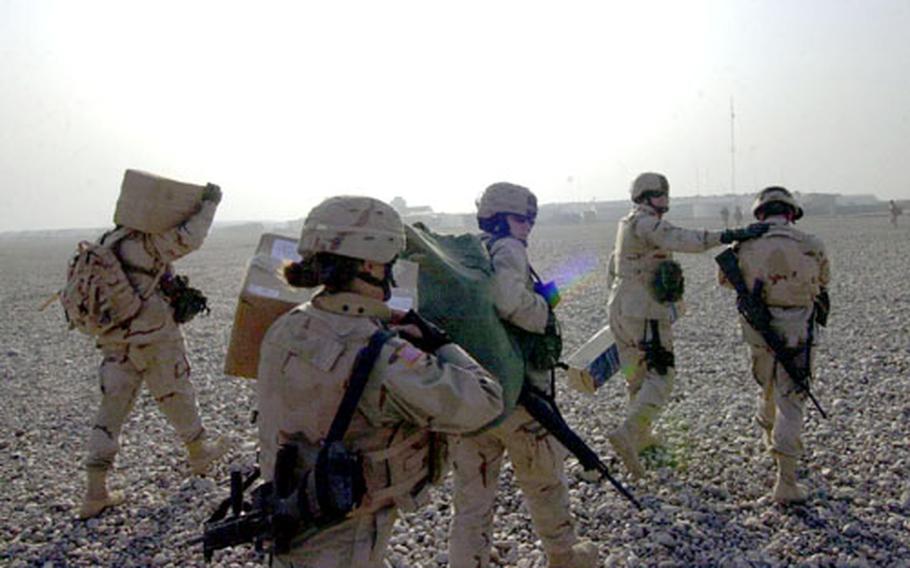 Members of the 256th Brigade Combat Team arrive with gifts, mail and Christmas decorations for a small detachment of soldiers at Butler Range. (Joseph Giordono / S&S)

Members of the 256th Brigade Combat Team arrive with gifts, mail and Christmas decorations for a small detachment of soldiers at Butler Range. (Joseph Giordono / S&S) Sgt. Shelley Landry, right, and Spc. Selina Ray, center, of the 256th Brigade Combat Team, help decorate the dining facility at Butler Range, a relatively isolated base where 10 members of the 256th will be assigned for Christmas. (Joseph Giordono / S&S) BUTLER RANGE COMPLEX, Iraq &#8212; Soldiers of the 256th Brigade Combat Team are working to ensure all their comrades, especially those at relatively isolated locations outside the main camps, get a taste of the holiday spirit.

This week, a group of officers and enlisted soldiers flew by helicopter from Camp Liberty (formerly Victory North) to Butler Range, bearing gifts, decorations, mail and well wishes for a small detachment of 256th soldiers assigned there for the holidays.

The range, a small, wind-swept training camp a few hours&#8217; drive from Liberty, is staffed by small detachments from various units in the area. Ten soldiers from the 256th will be there for Christmas, before rotating back to Liberty at the end of a 30-day stint.

At Camp Liberty, the 256th will throw a big party &#8212; complete with traditional Louisiana food and music. The brigade&#8217;s 3,000 soldiers, mostly from Louisiana, are making arrangements to transport fresh, hot meals to Butler Range for Christmas. Normally, soldiers there eat T-rations or Meals, Ready to Eat.

The camp hasn&#8217;t been hit by mortars or rockets, he said, and there&#8217;s just enough entertainment around to pass the time. What he&#8217;ll miss most for the holidays is the gumbo his grandmother makes every Christmas Eve.

The dining facility at Camp Liberty will be serving gumbo, he noted, just as it did for Thanksgiving.

Like the other 256th soldiers at Butler Range, Spc. Darrick Jefferson, a 25-year-old from Boyce, La., splits his 12-hour workdays between six hours of manning a checkpoint and six hours of doing other jobs on the camp.

More than any of his family&#8217;s Christmas traditions, Jefferson will simply miss his family. Especially his kids.

Spc. Selina Ray, a 22-year-old supply soldier from Broussard, La., was one of the soldiers bringing the gifts and decorations. At Camp Liberty, she&#8217;ll try to re-create some of her family&#8217;s Christmas traditions.

She has a small Christmas tree in her room and plans to open her gifts on Christmas Eve, just as she would at home.