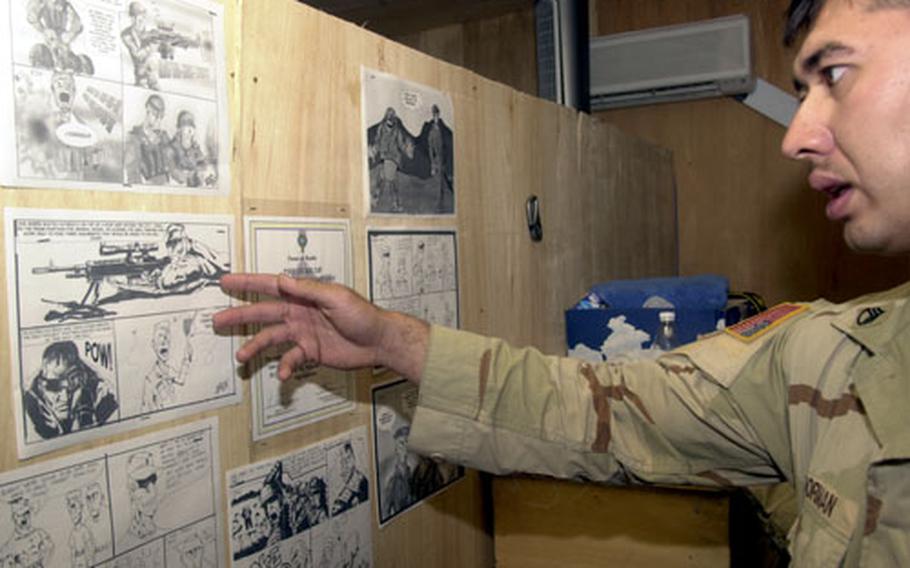 The 27-year-old reservist from Augusta, Ga., brings his nothing-is-sacred approach to life in his &#8220;Reality Check&#8221; comic strip, which has succeeded in irking a few high-ranking officers. Dorman, a grunt for nine years, now finds himself mostly working behind a desk for the Army.

The humorous comic that follows the escapades of a daydreaming private stuck behind a desk wishing he were in combat began as a way to boost troop morale in Afghanistan, where Dorman is serving a yearlong deployment.

Everyday experiences and stories from fellow troops serve as ideas for Dorman.

The &#8220;controversial&#8221; strip that landed Dorman in hot water begins with the main character, Pvt. Sham, recounting war stories in the image of a hard-core, high-speed infantryman. Next, a superior screams &#8220;Wake up!&#8221; in Sham&#8217;s ear, and the private awakens at his desk in the S-1, or personnel, shop. Of the roughly 15 strips that Dorman has completed, he says that one is his favorite because it ruffled feathers.

Dorman works on the comic in his spare time. Each comic takes about 15 minutes to draw. After he draws the comic, Dorman scans the image into a computer to add dialogue and color.

Despite no formal art training, Dorman employs contrasting artistic styles in &#8220;Reality Check.&#8221; For the daydream sequences, soldiers are drawn in a hard-edge, masculine style saturated with intensity. When the strips snap back to reality, the characters are drawn in a style reminiscent of &#8220;Garfield&#8221; or &#8220;Calvin and Hobbes.&#8221; Without even reading the dialogue, the message of the comic strip is crystal clear.

Even though he now works behind a desk in psychological operations, Dorman still gets a chance to go outside the wire. On Aug. 26, his third wedding anniversary, Dorman was wounded by shrapnel during a rocket attack on a convoy he was traveling in. Able to find humor during the painful experience, Dorman said he may use the incident for a future &#8220;Reality Check&#8221; comic.

Dorman would like to continue doing the comic strip, and his main motivation is getting the comic out so people can enjoy it. He has more ideas in his head but is holding off on a few of them.

Sgt. 1st Class Rick Scavetta, Combined Joint Task Force 76 media chief, said one can only hope the work that Dorman is doing with the comic strip is seen by more soldiers.