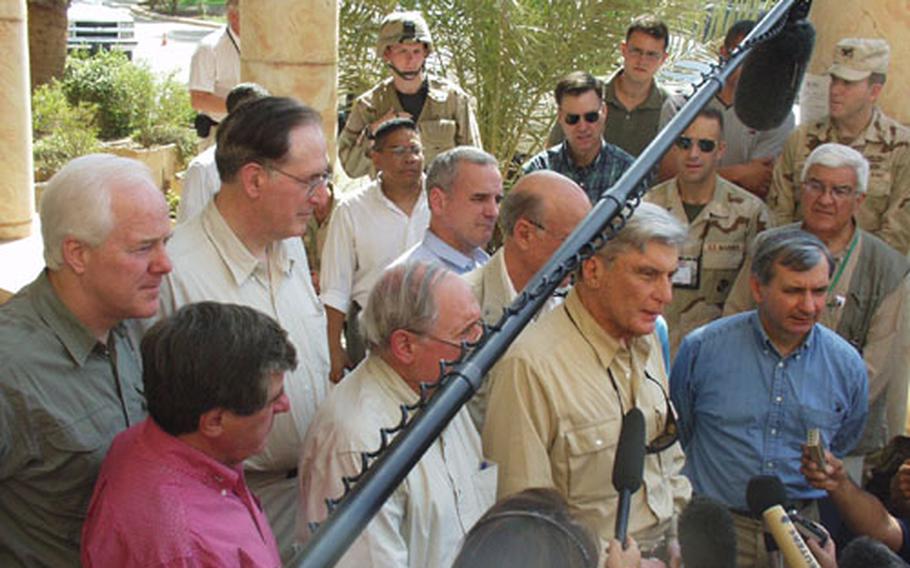 A group of nine U.S. senators, led by John Warner and Carl Levin, answer questions Tuesday during a visit to one of Saddam Hussein’s former presidential palaces, now a headquarters for the Coalition Provisional Authority. The senators are all members of the Senate Armed Services Committee. (Kent Harris / S&S)

BAGHDAD, Iraq &#8212; Nine members of the U.S. Senate Armed Services Committee are in Iraq, making the first congressional visit to the country since the United States, Britain and Australia started their military campaign.

The delegation, led by John Warner, R-Va., and Carl Levin, D-Mich., met with military leaders, Coalition Provisional Authority chief L. Paul Bremer and soldiers during a stop in Baghdad on Tuesday. The three-day Iraq trip began Monday in Basra and was to conclude Wednesday at an undisclosed location.

After meeting with military leaders, Warner, chairman of the committee, said he is satisfied the number of troops in the country is &#8220;adequate.&#8221;

But Levin hinted that he believes more forces could be useful, although he said he thought every effort should be made to enlist other countries to help.

He said the American people &#8212; and the Iraqi people &#8212; need to be told that it will take more than a short-term commitment of a few thousand troops to put the country in order.

Levin said additional forces from the United States or other countries could be used to help patrol the border and help train Iraqis to take over law enforcement and military roles.

Each of the senators had a short message to deliver to the media gathered in front of one of Saddam Hussein&#8217;s former palaces, which is now the headquarters for the CPA. They praised the efforts of U.S. troops and the civilian authority, said the coalition&#8217;s support was strong at home, and decried the state of Iraq, blaming Saddam for much of its current problems.

Sen. Jay Rockefeller, D-W.Va., while stating that the situation in Iraq &#8220;could get worse before things get better,&#8221; said the coalition forces will stay in the country until they&#8217;ve achieved their missions.

Sen. Susan Collins, R-Maine, said the legislators had heard rumors of low morale among the troops, but the delegation saw none of that.