Navy Petty Officer 1st Class Chad Voudren shows a high school senior how to properly wear a scarf in desert conditions. Most of the students who toured the exhibit probably won’t become SEALs, but many enjoyed talking to the unit’s members and getting a better appreciation for what they do. (Scott Schonauer / S&S)

Navy Petty Officer 1st Class Chad Voudren shows a high school senior how to properly wear a scarf in desert conditions. Most of the students who toured the exhibit probably won’t become SEALs, but many enjoyed talking to the unit’s members and getting a better appreciation for what they do. (Scott Schonauer / S&S) Chris Orem, 13, holds a grenade launcher Friday at Naval Station Rota, Spain, as Navy Petty Officer 2nd Class Morgan Morgan and Petty Officer 2nd Class Will Brenes look on. Naval Special Warfare Unit 10 showed off some of their equipment as part of its 10th anniversary of the unit’s arrival at the base in southwest Spain. (Scott Schonauer / S&S) 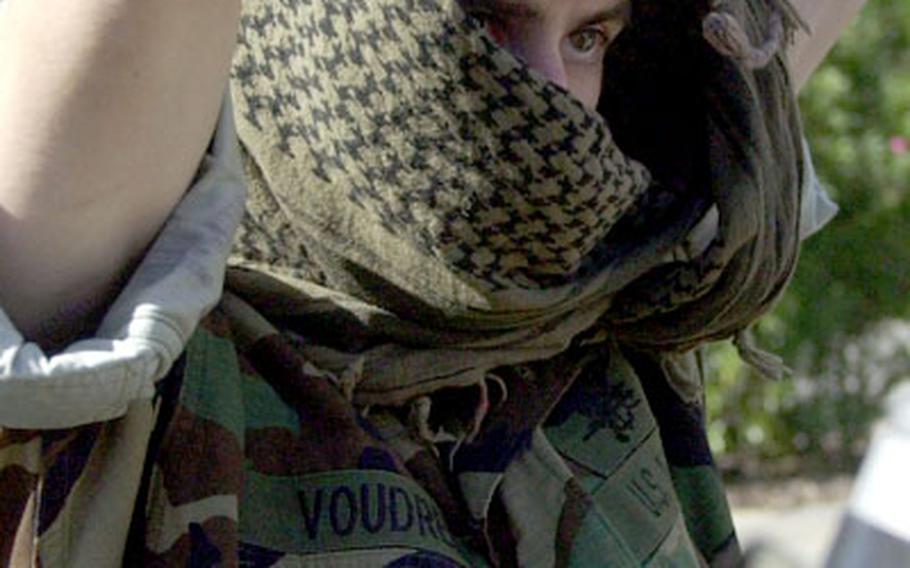 Navy Petty Officer 1st Class Chad Voudren demonstrates the proper way to don a head scarf in desert conditions. The unit used to demonstrations to try to recruit new members from the base’s class of high school seniors, distributing brochures and administering tests to interested students. Rota is one of two sites in Europe that offer such pre-screening tests. (Scott Schonauer / S&S)

NAVAL STATION ROTA, Spain &#8212; What special operations forces do is often performed in the shadows, but the Navy&#8217;s elite SEAL units are making no secret that they need more top-quality recruits.

When members of Naval Special Warfare Unit 10 marked the unit&#8217;s 10th anniversary Friday in Spain by showing off their &#8220;toys,&#8221; they also made a subtle pitch for more members.

They invited about 30 high school seniors from the base to get a special, up-close look at their dive gear, hold some of their weapons and check out their high-tech reconnaissance equipment. Anyone interested in becoming a SEAL or a Navy diver could pick up more information or ask the team members face to face.

The military is leaning heavily on its elite forces in all branches to fight the war on terror across the globe, and the number of units is expected to grow in the next decade. That means troops who often prided themselves on keeping a low profile are slowly coming out in the open to talk more about what they do in hopes that potential recruits consider joining.

The unit in Rota has nearly 50 people, who support deployed units passing through the Mediterranean Sea region. None are recruiters. Their main job is to help transiting special operations units keep their skills up and provide command and control aid to those heading to hot spots.

Since the Sept. 11, 2001, terror attacks against the United States, the unit has participated in missions outside of their support roles to meet the growing need for the elite troops.

Many people on base do not know the Navy&#8217;s unit exists even if they might have passed members in the commissary or base exchange. But on Friday the unit&#8217;s rare show-and-tell offered a little glimpse.

Anyone interested in joining the SEALs couldn&#8217;t have picked a better time and place to get more information and find out if they have what it takes. Those interested in the elite team could also take a test to see if they measure up.

Rota is one of two sites in Europe that offer pre-screening tests for potential SEALs recruits. Stuttgart, Germany, is the other.

Finding people who can do it is a challenge. About 80 percent of the people who show up for SEALs training do not finish, so special warfare community has to be selective, Oden said.

What sets the Navy SEALs apart from the other special operations forces is water. Unlike the other branches, Navy recruits have to master warfare skills on land and water.

Most of the high school seniors who toured the exhibit probably won&#8217;t become special operations troops or Navy divers. But some students enjoyed talking to the SEALs and getting a better appreciation for what they do.