Sale of alcohol ceases on Yokosuka 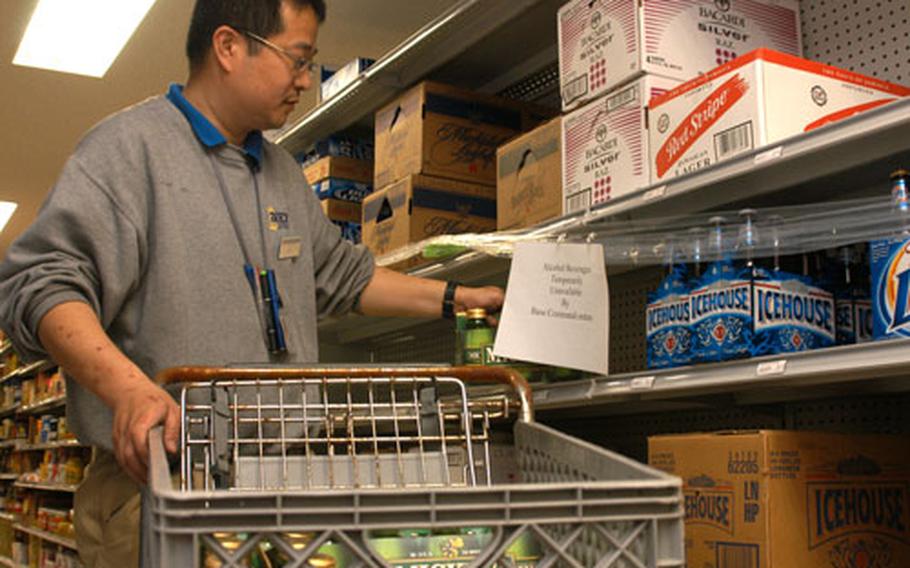 Yokosuka Navy Exchange employees emptied the shelves of alcohol Wednesday evening when orders came down prohibiting the sale of alcohol on base and all public consumption of alcohol by Status of Forces Agreement personnel attached to Yokosuka, Ikego and Negishi. A 10 p.m. to 6 a.m. curfew also went into effect. The restrictions will be reviewed Monday, officials said. (Allison Batdorff / S&S)

YOKOSUKA NAVAL BASE, Japan &#8212; Alcohol sales at Yokosuka Naval Base halted Wednesday, with employees pulling every bottle, case and six-pack off store shelves.

Signs went up at on-base bars telling customers alcohol was not being served. A flurry of phone calls and e-mails went out telling Yokosuka-based personnel to limit their movements between the hours of 10 p.m. and 6 a.m.

It impacts all Status of Forces Agreement personnel attached to Yokosuka Naval Base and in the associated housing areas of Ikego and Negishi, CNFJ spokesman Cmdr. David Waterman said Wednesday evening. They will be in effect from Wednesday to Monday, when they will be &#8220;reviewed,&#8221; he said.

&#8220;The goal of this action is to review plans and policies on violence prevention and to respectfully mourn the tragic loss of Mr. Takahashi,&#8221; CNFJ commanding officer Rear Adm. James Kelly was quoted as saying in a news release.

Masaaki Takahashi, a 61-year-old taxi driver, was stabbed to death March 22 in Yokosuka. A credit card bearing the name of a USS Cowpens sailor was found in the taxi, although to date, the sailor has not been charged with anything, and Japanese police have declined to say whether he is a suspect.

&#8220;As a sign of respect&#8221; for the incident, all U.S. Navy personnel &#8212; uniformed and civilian &#8212; are to refrain from public alcohol consumption, the release said. In regard to the 10 p.m. to 6 a.m. restrictions, exceptions will be made for work travel and essential errands, the release said.

Ship tours have been canceled for Sunday&#8217;s open-base spring festival, which will now have a more serious tenor, Waterman said.

At Yokosuka&#8217;s Autoport minimart Wednesday evening, customers marveled at the large empty spaces where the alcohol used to be.

Others fretted about the restrictions &#8212; and what might come later, if the sailor officially becomes a suspect.