Scanned version of an old Iraqi dinar with Saddam Hussein on the front. The Saddam dinars are still used in the country but are being replaced in October. ()

Scanned version of an old Iraqi dinar with Saddam Hussein on the front. The Saddam dinars are still used in the country but are being replaced in October. () 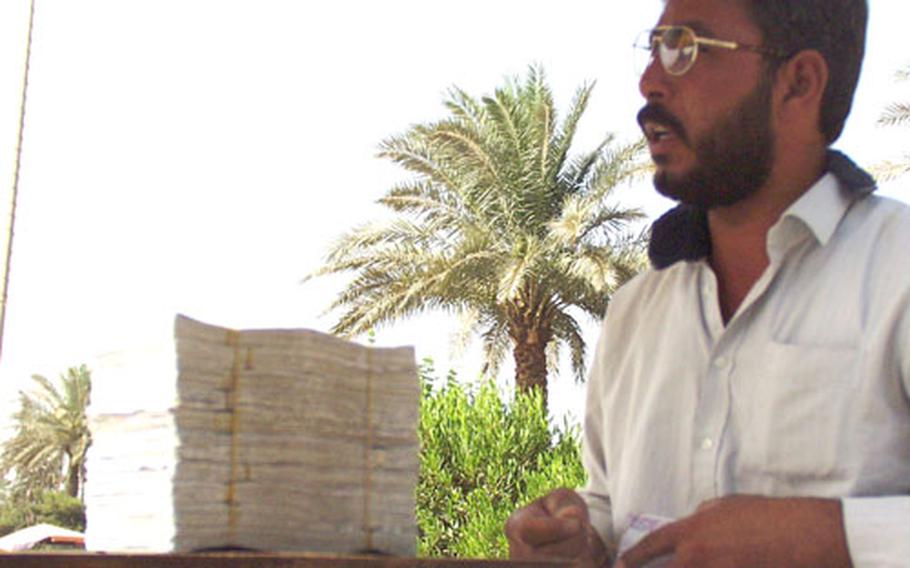 Juma Hatim Mohammed is one of dozens of Iraqis who set up small stalls along roadsides in Baghdad, exchange dollars for dinars. It takes a stack of dinars similar to the one on the table to equal $100. (Kent Harris / S&S)

BAGHDAD, Iraq &#8212; Saddam Hussein&#8217;s face might disappear from this country for good around the beginning of next year.

When Saddam fell from power, local citizens hauled down statues and beheaded dozens of murals bearing his likeness around the capital. But his face has remained on the 250 dinar note, which has become essentially the only useful denomination for most of the country.

It takes handfuls of such notes to make any significant purchases, with the exchange rate hovering at more than 1,000 dinars to a dollar.

&#8220;It became clear to us that the current situation was somewhat restraining for the Iraqi people,&#8221; said a senior official with the Coalition Provisional Authority during a press briefing Monday to discuss three moves made to bolster the local economy.

One of those moves &#8212; probably the most tangible for most Iraqis &#8212; will be the introduction of new bank notes starting Oct. 15. The notes will loosely resemble the so-called &#8220;Swiss dinar&#8221; that&#8217;s currently in limited circulation in the north of the country.

But CPA officials, speaking only on condition of anonymity, said the new notes would be more durable and contain anti-counterfeiting measures.

Officials say the currency resembles the money that was used throughout the country prior to 1991. That year, Iraq started to issue bills that featured Saddam&#8217;s face on them. The currency has steadily lost its value against other currencies.

Iraqis will have several months to exchange their current notes for the newer versions, and during the transition both currencies will be accepted throughout the country. It&#8217;s a process similar to what many Europeans went through with the adoption of the euro at the beginning of 2001.

A British firm is likely to get the contract to print the new money, and officials say the printing will begin shortly. The goal is to get enough money ready by Oct. 15 so that there will be a sufficient amount to make the exchange work.

Those present at the briefing were reluctant to discuss the exchange rate for the new currency, but said it would likely be similar to the current standard.

But another of the three moves announced Monday may have some impact on that.

CPA chief administrator L. Paul Bremer approved the establishment of an independent central bank. Such agencies in Western countries are under partial control of the governing administration, but generally maintain a good deal of independence.

Central banks are able to affect the economy by lowering or raising interest rates they charge in extending credit to commercial banks. Such power has made Alan Greenspan, chairman of the Board of Governors of the Federal Reserve System, one of the most influential voices on the U.S. economy.

Another measure the CPA announced might have an impact on the exchange rate as well as stimulating the economy. Bremer signed off on a budget of more than 9 trillion dinars that will fund a variety of projects &#8212; and restart some state-owned enterprises &#8212; through this year.

Officials say the budget will be balanced and is based on sound economic principals. So it&#8217;s possible that international observers may look at the Iraqi currency in a better light.

CPA officials said the projects funded in the budget will be offset by about $4.5 billion in oil revenue as well as a sizable contribution from the U.S. government. They promised to discuss more specific parts of the budget later this week.