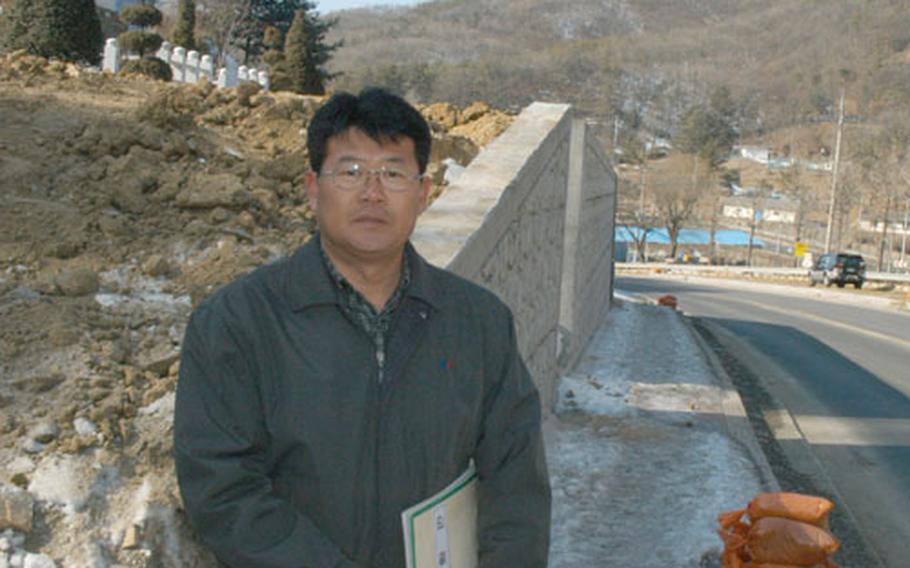 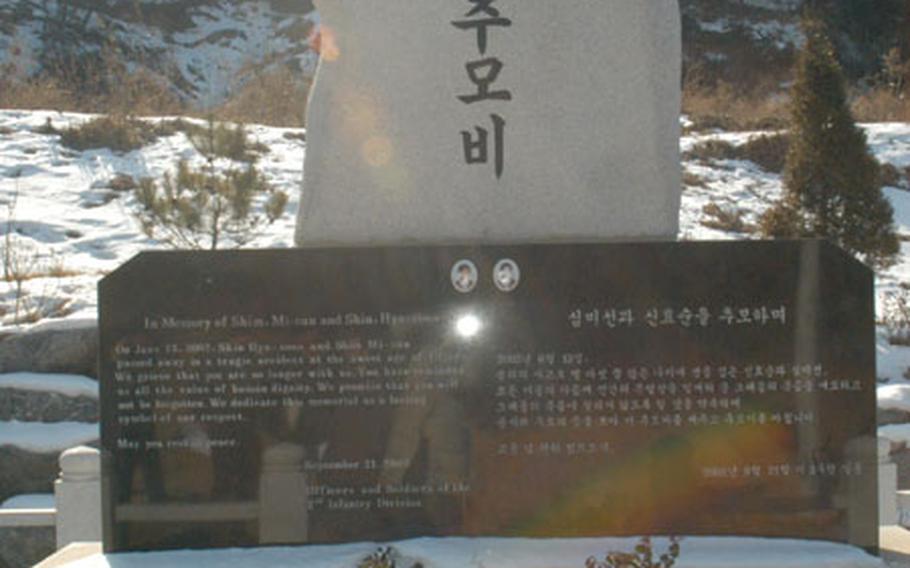 A memorial to two young girls run over and killed by a U.S. military vehicle in Gyeonggi Province. (Seth Robson / S&S)

HYOCHON, South Korea &#8212; Improvements to the stretch of road where two young South Korean girls were struck and killed by a U.S. military vehicle almost two years ago, sparking vast anti-American protests, will be finished by April, local officials say.

The effort is part of a larger, $94 million plan to improve more than 100 miles of roads in Gyeonggi Province, with special emphasis on widening roads used by 2nd Infantry Division vehicles said officials.

Lee Se-Jong, provincial government assistant director of civil-military relations, said the June 2002 accident that killed Shim Mi-sun and Shin Hyo-soon was part of the impetus for the improvements. Relations between the 2nd ID and the community could deteriorate, if there is another vehicle accident, Lee said.

So during the next two years, Gyeonggi Province will widen, straighten and smooth the roads, Lee said.

Songwoo Construction technical adviser Kim Myong-ngon, whose company was contracted on behalf of the province, said the initial improvement project is 85 percent complete.

The job, which started in December 2002, involves widening about two miles of Provincial Road 56 between Hyochon-ri and Yangju City.

South Korea&#8217;s national government paid almost $1 million to acquire nearby land to widen the road, while construction costs have been met by Gyeonggi Province, officials said.

Lanes are being widened by about three feet to provide enough room for military vehicles to pass, Kim said. A memorial, near a South Korean military installation occupied by the South Korean army&#8217;s 102nd Engineering Battalion, marks the uphill S-bend where the girls were hit.

The road is being realigned to make the curve less severe and a footpath has been added.

Gyeonggi&#8217;s director of planning and administration, Park Shin- Heung, said the road&#8217;s poor condition was the main cause of the accident.

&#8220;We are now making every effort to prevent another accident, and we hope that such an accident will not happen again,&#8221; he said.

&#8220;That is why we have increased investment to improve road construction,&#8221; he said, adding Gyeonggi&#8217;s road spending is 3.5 times what it was two years ago. &#8220;The death of the two middle school girls and the woman soldier were not useless,&#8221; he said, referring to a June 2003 accident in which a female 2nd ID soldier was killed when an M113 armored vehicle overturned.

Despite the fact most of the South Korean and U.S. Army infantry divisions are concentrated in northern Gyeonggi Province, road construction in Area I is relatively poor compared with other areas in South Korea, Park said.

The road, originally built for moving tractors and farm equipment, has been used as a military vehicle route in recent years to avoid other local roads where residents have complained of noise, officials said.

The road, which runs through rice paddies between Paju and Dapgok-ri near the Dagmar training area close to the Demilitarized Zone, has been widened from 10 feet to 17 feet and now has two miles of steel barriers and reinforced banks.

Paju City road maintenance manager Yoo Gwang Hyoung said road improvements were carried out between August and October last year. By 2005, he said, the road will be widened further to allow two lanes of traffic to pass.

Lee said improvements to the road network in Gyeonggi have a long-term purpose. Major arteries such as State Highway 3, the Peace Road, and State Highway 1, the Freedom Road, are designed to one day link with roads in North Korea, he said.

Cities like Paju eventually are to be gateways to the North, Lee said.