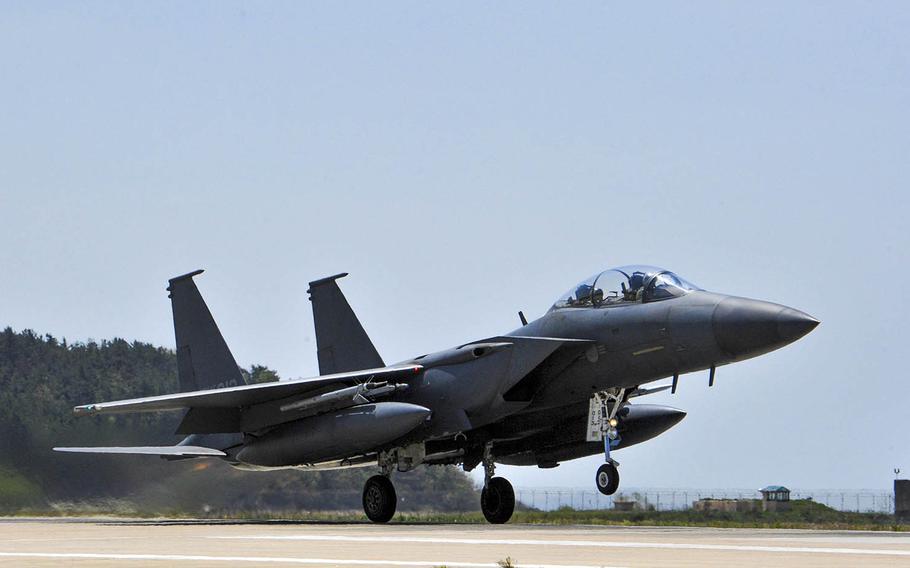 SEOUL, South Korea — South Korea has temporarily grounded its fleet of fighters “except those needed for national defense,” military officials said Friday after a jet slammed into a mountain, killing the two pilots.

Search crews found the flight data recorder in the wreckage of the F-15K Slam Eagle along with body parts from the men who apparently failed to eject when it crashed Thursday on Mount Yoohak in the rural southern area of Chilgok.

A funeral was scheduled for the pilots Saturday at the Daejeon National Cemetery, with the defense minister and other senior officials in attendance, the air force said in a press release.

The discovery of the black box will aid the investigation into the cause of the crash, which occurred as the crew was flying back to Daegu after a mission.

An air force official said there was “no problem with weather conditions” during the mission, but the pilots were using “instrument flight” not visual rules, according to the Yonhap News Agency.

Yonhap reported that the downed jet had been flown for 2,158 hours.

The air force, meanwhile, temporarily suspended flights of the Boeing-made Slam Eagles “except those needed for national defense,” another military official said, speaking on condition of anonymity according to department rules.

The official declined to elaborate or comment on whether the decision would affect U.S.-South Korean war games known as Foal Eagle, which began April 1 and are expected to last about four weeks.

The F-15Ks can conduct long-range, precision strike missions and are a key element of its air power as South Korea faces a growing missile and nuclear threat from the North. The jets frequently escort supersonic U.S. bombers in flights over the divided peninsula.

The South Korean air force placed a $4.2 billion contract with Boeing for 40 Slam Eagles in 2002, then ordered 21 more in 2008 with deliveries completed in 2012, according to Air Force Technology.