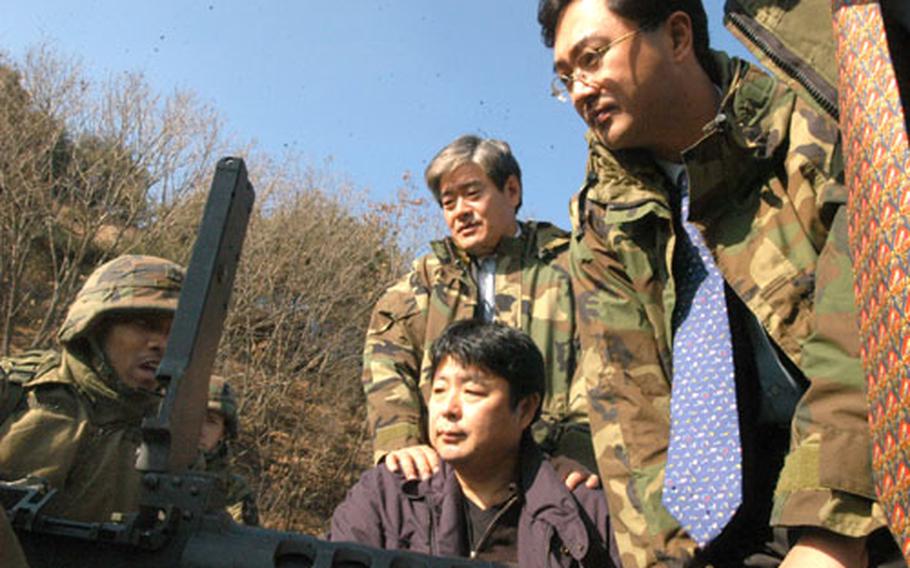 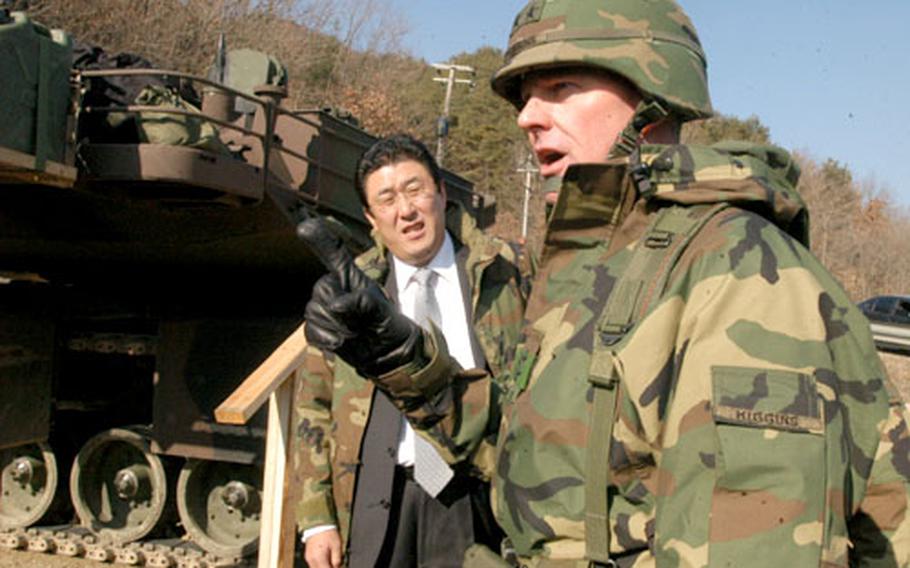 RODRIGUEZ RANGE, South Korea &#8212; The 8th U.S. Army preached deterrence through strength at Rodriguez Range on Monday to a group of young businessmen and women dubbed &#8220;the future leaders of South Korea.&#8221;

All born after 1960, they were chosen by the United Services Organizations (USO) Foundation to travel to the range along with 8th Army commander Lt. Gen. Charles C. Campbell and 2nd ID commander Maj. Gen. George A. Higgins.

&#8220;They are very young and they are the leaders of the future in this nation but they never 100 percent understood&#8221; why the U.S.-ROK alliance was important, he said, &#8220;because they were born after the Korean War. They had never experienced the alliance between the U.S. and Korea.&#8221;

Wearing green camouflage field jackets over their suits and ties, the group assembled at the range observation tower to observe Bradley Fighting Vehicle and Abrams Main Battle Tank gunnery and question 2nd ID&#8217;s 1st Brigade commander Col. Mike Feil. Then the future leaders clambered over a Bradley and three tanks before sitting down to a lunch of MREs (Meals Ready to Eat) with the soldiers.

Campbell told Stars and Stripes that the visit was part of an outreach program to South Koreans.

&#8220;We are outreaching to a group of very successful young businessmen who we believe are going to be part of the future of this great nation. Most are presidents and chief executives of companies&#8221; and have provided financial support and products to the USO, he said.

The future leaders have a shared interest in preserving peace and stability on this peninsula, he said. &#8220;This is equipping them with a full appreciation so they can move back into their sectors and be spokespeople and advocates of the ROK-U.S. alliance.&#8221;

The most important thing they could take from their visit to the range was an understanding of deterrence, Campbell said.

The noise of shells impacting the range was &#8220;the sound of freedom,&#8221; he told the future leaders.

&#8220;Sometimes there are those within society who would like us to train a little less rigorously &#8212; to shoot our artillery less frequently, fly our airplanes less frequently &#8230; [but] deterrence is only created by trained and ready forces. That is U.S. and ROK [Republic of Korea] forces,&#8221; he said.

He urged the young leaders to make the case, within their spheres of influence, that ROK and U.S. forces need to train rigorously.

If North Korean leader Kim Jong Il &#8220;thought he could reunify the peninsula through force he would do so,&#8221; Campbell said. &#8220;He makes a calculation on the basis of the readiness of the ROK and U.S. forces and the commitment of the U.S. to the alliance and he elects not to use force. As long as we stay ready and stay trained the probability of conflict on the peninsula is significantly reduced.&#8221;

Elain Kim of Design Group International said the range visit was the first time she saw tanks or gunnery.

Unick Corporation President Cyril Jungkoe An, whose company makes automotive components, said he enjoyed clambering on the tanks. &#8220;I had not seen these tanks so closely and I had not seen a Bradley,&#8221; he said.

Hard training is the only way to protect South Korea, he said.

The U.S.-ROK alliance would ensure a future for South Korean children, he said.