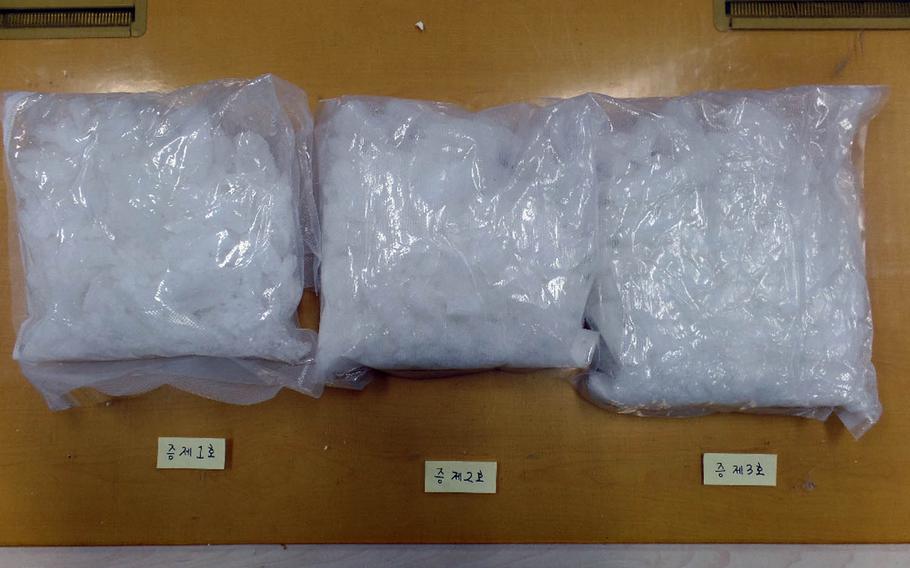 Four soldiers stationed in South Korea have been accused of using the Military Postal Service to try to smuggle illegal drugs to South Korea for sale by a third party. (Courtesy of the Pyeongtaek Branch Prosecutor's Office)

SEOUL, South Korea — The care packages looked innocent enough, filled with cereal boxes and cookies for soldiers far from home. But a closer inspection revealed crystal methamphetamine worth millions of dollars hidden inside.

Four soldiers — two from Camp Humphreys and two from Camp Stanley — have been accused in separate cases of using the Military Postal Service Agency to try to smuggle illegal drugs to South Korea for sale by a third party.

South Korean prosecutors are investigating the possibility that both cases were linked to a smuggling ring involving a Korean-American man the soldiers called Jason.

The MPSA allows American soldiers, civilian government employees and their families to send and receive mail via the U.S. Postal Service even when they’re overseas.

Efforts to use it to smuggle drugs and other illicit items are not new. But the confiscation of nearly 20 pounds of methamphetamine marked a record haul for the Korea Customs Service last year – more than 2011 through 2015 combined, according to statistics obtained by Stars and Stripes.

Prosecutors said the meth in each case had a street value of about $10 million. “It’s a big issue,” said Lee Joong-hee, a deputy chief prosecutor involved in the case in Uijeongbu, a city north of Seoul that is the site of Camp Red Cloud, home to the 2nd Infantry Division.

“How many people could that affect?” he asked during a recent interview in his office, just a few blocks from the U.S. Army garrison.

The U.S. military said it was cooperating in the investigations but the prosecution was being left to the South Koreans, according to the status of forces agreement between the longstanding allies.

“The fact that these packages were detected through the customs examination process established under the SOFA indicates that the system works,” 8th Army spokeswoman Lt. Col. Catina Barnes-Ricks said in an email. “With regard to military repercussions … appropriate action will be taken based upon the results of the Korean legal proceedings.”

The Jason connection The first shipment of just over 9 pounds of meth packed in cookie boxes sent from Los Angeles was discovered Oct. 28 during an inspection at the Incheon International Airport near Seoul.

Local authorities then cooperated with U.S. military investigators to catch two 2ID soldiers in the act of collecting the shipment.

The Camp Stanley soldiers have been indicted on drug trafficking charges and face a sentence of five years to life in prison if convicted, prosecutors said.

The U.S.-South Korea status of forces agreement gives the host country jurisdiction over the U.S. armed forces for offenses committed within its territory and punishable under its law.

2ID said it was cooperating fully with local authorities in the matter.

Lee alleged they were acting on behalf of a Korean-American man called Jason.

The soldiers, whom prosecutors said are cooperating, said the man promised to pay one $3,000 and the other $1,000 for the delivery. Both soldiers, 19, have denied the drug allegations, saying they agreed to let Jason use the Army Post Office address but didn’t know he planned to ship illegal drugs, Lee said.

Only one of the soldiers has been jailed; the other was indicted without detention after a local judge refused to issue a warrant for his arrest, apparently because his only role appeared to be allowing the use of his APO address.

Lee, however, insisted he will prosecute both. “They were indicted as partners in the crime,” he said.

The main suspect said he met with Jason a few times and let him use his APO address three other times without incident. He said he didn’t know what had been in those shipments.

Lee said prosecutors believe that the main suspect may have asked to use the other soldier’s APO address to avoid drawing suspicion.

Cereal-box smuggling The Camp Humphreys case in December has many similarities, with 8.8 pounds of meth hidden inside cereal boxes that were part of care packages, also sent from California.

One of the soldiers has been jailed while the other was indicted without detention, apparently due to his supporting role.

Prosecutors in the nearby city of Pyeongtaek say the soldiers arranged to have the parcels shipped from California to an APO address. One agreed to let his address be used while the other is accused of being the main go-between with South Korean suspects, prosecutors alleged.

When asked about the case, an 8th Army spokeswoman said the U.S. Criminal Investigation Division intercepted and tracked a package containing drugs that had been mailed to an APO address in South Korea after receiving a tip from the Drug Enforcement Agency.

“The incident remains under investigation by U.S. and Korean authorities,” Lt. Col. Catina Barnes-Ricks said in an email.

In this case, a South Korean was arrested while four others with relatives in the United States remain at large.

Prosecutors are investigating whether a South Korean-American suspect — identified only as Jason — could be the same man involved in the Uijeongbu case. Jason is apparently one of several aliases used by the suspect, who was detained in January, prosecutors said without providing more details.

“The background of the Pyeongtaek case seems to be the same as Uijeongbu case,” Lee, the deputy prosecutor, said.

This transaction involved a smuggling ring that had a front in Seoul’s Gangnam neighborhood, where investigators also found more than 3 ounces of methamphetamines and a smaller amount of cocaine in a safe, the Pyeongtaek prosecutors’ office said in a statement.

Barnes-Ricks declined to comment on the possibility of a link.

“We do not comment on ongoing investigations, however, we take these allegations seriously,” she said in an email. “We want to be good stewards of our South Korean hosts, and will investigate thoroughly and implement appropriate mitigating measures to ensure this no longer occurs.”

Longstanding problem The MPSA, based in Washington, was created in 1980 to serve as the single manager for military mail, an extension of the U.S. Postal Service abroad, according to its website.

Mail is processed at the Joint Military Mail Terminal at Incheon International Airport before it’s distributed to bases.

The U.S. military maintains 28,500 servicemembers on the divided peninsula, as the two Koreas remain technically at war after the 1950-53 conflict ended in an armistice instead of a peace treaty.

While the system is a way for overseas personnel to use the USPS, most unofficial mail sent to South Korea is subject to customs examination, including visual, X-ray and physical inspection, according to the SOFA.

“Korean customs inspections are conducted on a sample basis at United States military postal facilities in the presence of U.S. military postal personnel,” the agreement says.

Smuggling has declined in recent years after South Korean authorities implemented a crackdown.

Those cases involved marijuana or other similar drugs, according to information provided to Stars and Stripes.

South Korea has exclusive or primary jurisdiction over almost all offenses committed in the country by U.S. servicemembers under the SOFA. Exceptions include crimes committed outside Korean law or occurring in the performance of official duty.

It’s not just soldiers who have access to the MPSA. A 37-year-old retired American civilian employee at Yongsan was given a suspended four-year sentence and fined about $50 on April 6 for trying to smuggle about 20 grams — less than an ounce — of marijuana through the mail last year. The court redacted his full name from the sentencing document.