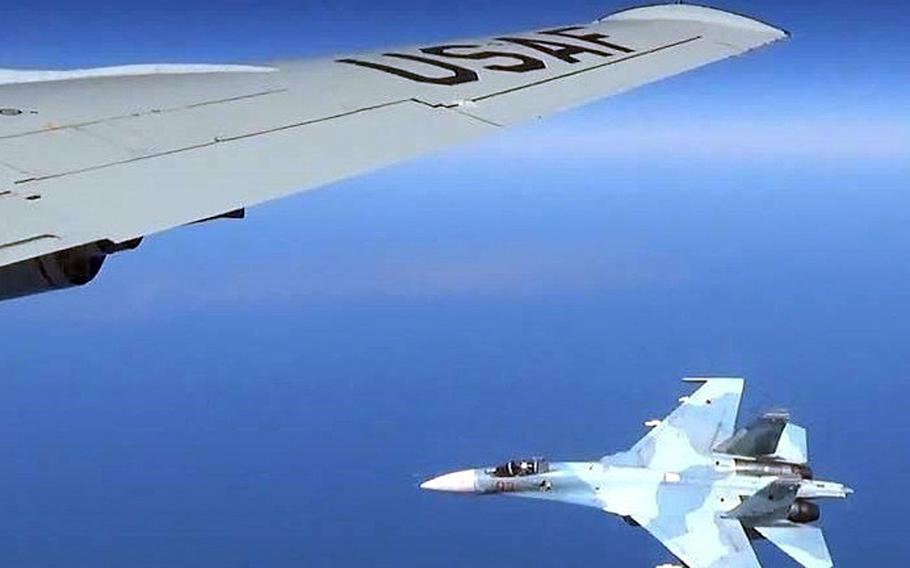 A U.S. RC-135U flying in international airspace over the Baltic Sea is intercepted by a Russian Su-27 Flanker on June 19, 2017. A Russian Su-30 fighter flew within 50 feet of a U.S. Navy P-8A Poseidon surveillance aircraft traveling over the Black Sea on Nov. 26, 2017. (Courtesy U.S. European Command)

STUTTGART, Germany — A Russian fighter crossed within 50 feet of a U.S. surveillance aircraft flying over the Black Sea, blasting its afterburners in a dangerous maneuver in front of the American aircraft, military officials said Tuesday.

The encounter on Saturday between the Sukhoi Su-30 fighter and the P-8A Poseidon maritime patrol jet lasted about 25 minutes and culminated with the Russian plane cutting in front of the P-8A, U.S. European Command said.

“The commander of the aircraft determined it was unsafe,” said Maj. Juan Martinez, a EUCOM spokesman.

The Su-30’s afterburners created a stream of turbulence that caused the U.S. plane to tilt into a 15-degree roll, Martinez said.

The P-8A, based on Boeing’s 737-800 airliner, lacks the maneuverability of the much smaller Su-30 fighter jet.

Navy P-8s, which often fly out of the Navy’s air station in Sigonella, Italy, are specialized in anti-submarine warfare and electronic support measures.

Encounters between Russian and U.S. military aircraft are fairly routine around the Baltic states and the Black Sea. In most cases, intercepts happen without incident as aircraft follow a set of air safety protocols.

However, U.S. and NATO officials have complained that the Russians sometime engage in unpredictable, aggressive maneuvers that include flying without transponders turned on.

In June, a Russian fighter flew toward a U.S. Air Force surveillance plane over the Baltic Sea with a “high rate of closure speed and poor control of the aircraft,” EUCOM said at the time. Last year, a Russian fighter barrel-rolled over the top of an Air Force RC-135 flying in international airspace, in a maneuver that the military said put the U.S. crew at risk.

Saturday’s encounter also occurred in international airspace, EUCOM said. The Navy P-8A was observing international flight rules and was flying with its transponder on, Martinez said.