Road to Afghanistan’s future harkens back to ancient Rome 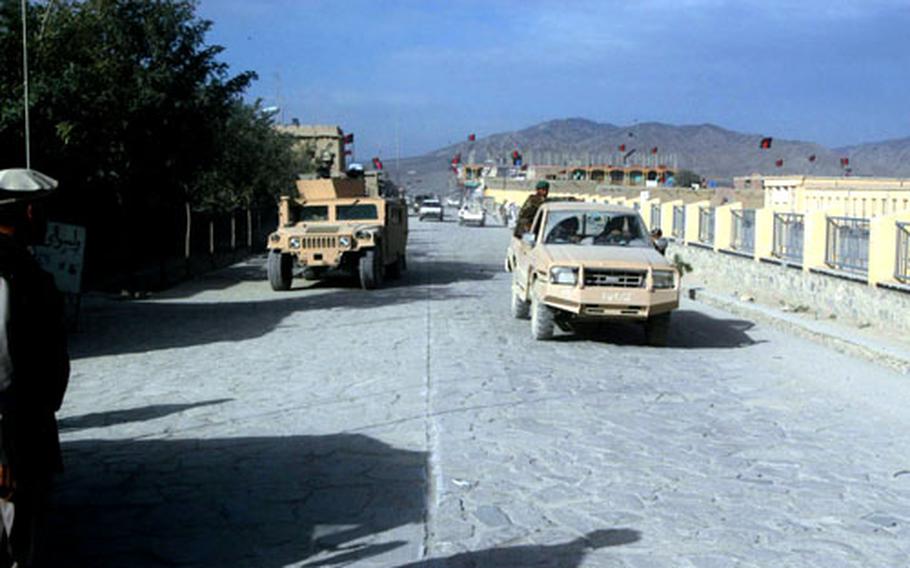 Thanks to funding from the U.S. Army, Orgun is the first community in Paktika province to have a cobblestone road. International Building Company of Kabul was selected to construct about three kilometers worth of cobblestone road in the town’s center. About two-thirds of the work has been completed. (Kent Harris / S&S)

Thanks to funding from the U.S. Army, Orgun is the first community in Paktika province to have a cobblestone road. International Building Company of Kabul was selected to construct about three kilometers worth of cobblestone road in the town’s center. About two-thirds of the work has been completed. (Kent Harris / S&S) 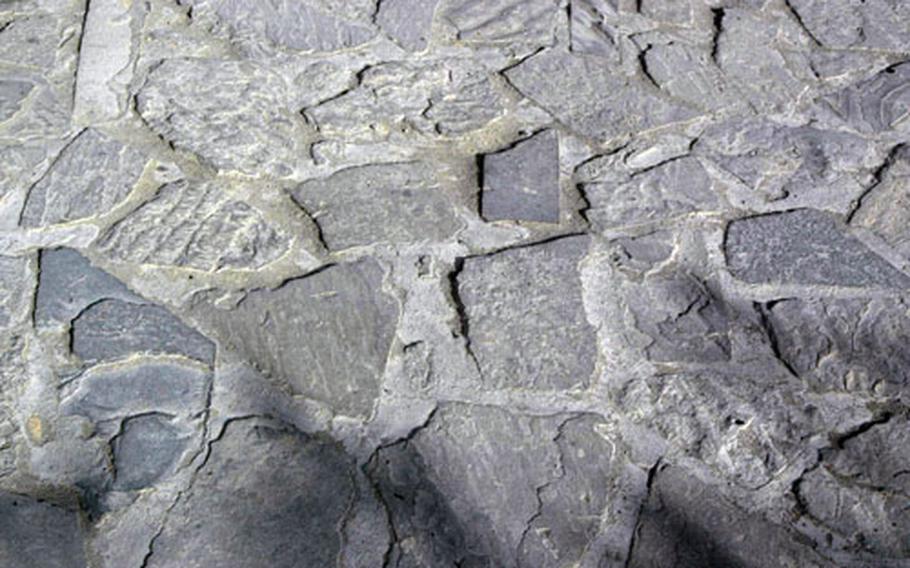 Rocks for the cobblestone road in Orgun, Afghanistan, were taken from a river bed. Local workers have spent the last few months laying the stones and mixing cement to create about 2.2 kilometers of road. (Kent Harris / S&S) 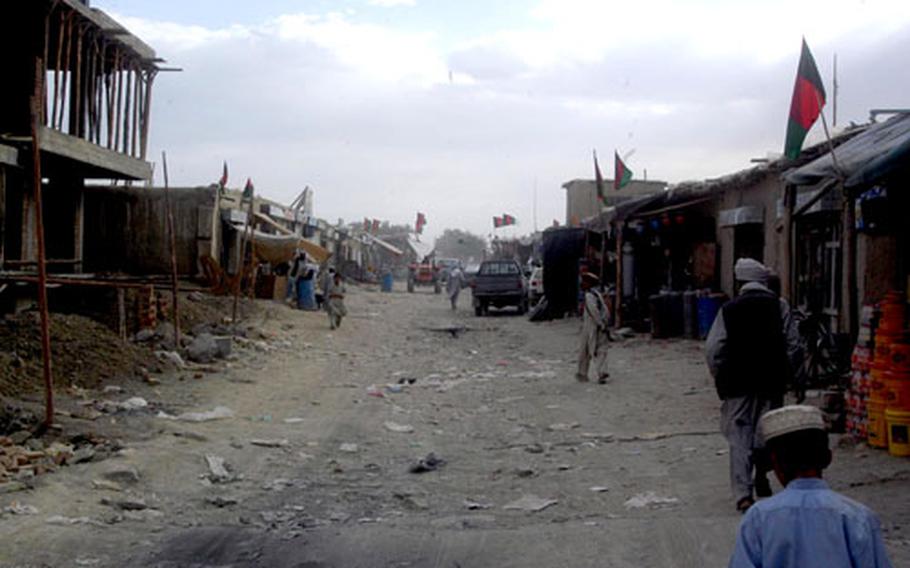 Most roads in Paktika province, even in the middle of larger communities such as Orgun, are of the most basic nature: dirt, mixed with rocks and debris. This stretch will soon be covered with a cobblestone road. (Kent Harris / S&S) 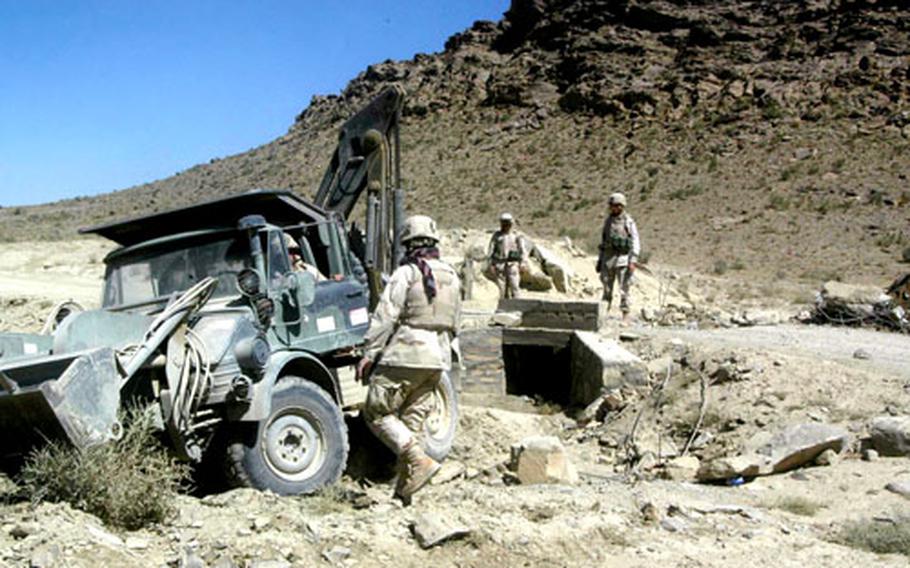 Soldiers from Company B, 864th Engineer Battalion from Fort Lewis, Wash., get ready to demolish part of a bridge spanning a section of the road to be replaced in Paktika province. (Kent Harris / S&S) 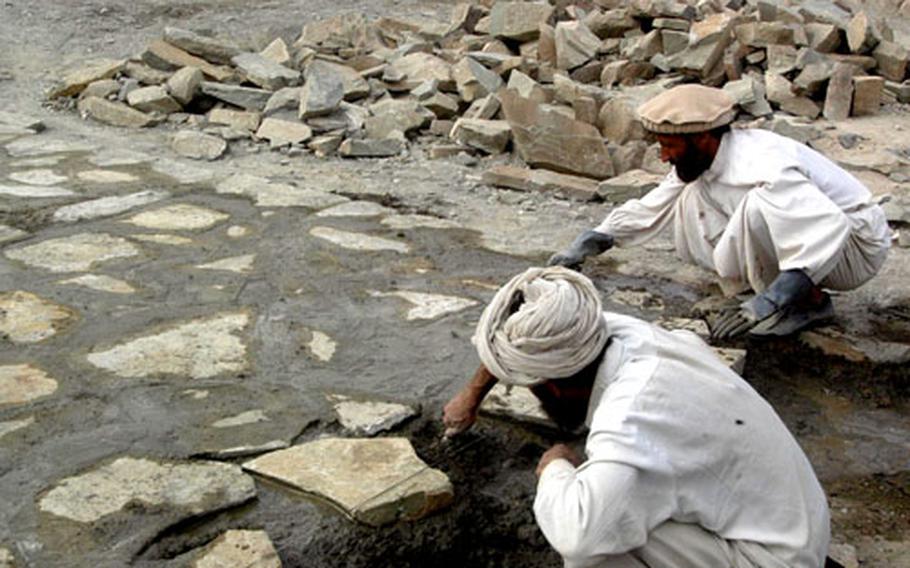 Afghan workers mix stones and concrete to build a cobblestone road in Orgun — the first such road in Paktika province. An Afghan contractor is doing the work thanks to money from the U.S. Army. (Kent Harris / S&S)

ORGUN, Afghanistan &#8212; The Roman Empire, vast as it was, never included Afghanistan. But thanks to American soldiers based in Italy, roads similar to those used by the caesars are under construction in the Afghan hinterland.

Though a cobblestone road might be seen as a step back into the past in most parts of the United States and Europe, a 1.4 mile stretch in the province&#8217;s commercial hub has Afghans looking toward the future.

Similar efforts in two other towns in the province are under way and Army engineers are busily at work on the first in a series of mammoth road construction projects that should make traveling far easier &#8212; and far quicker &#8212; within a few years.

It wasn&#8217;t easy to arrange, though. Hando had read up on cobblestone roads &#8212; known by some as Roman roads &#8212; and decided it was the best solution under the conditions. He has access to a discretionary fund the military uses for such projects.

But once the project was approved, he needed to find someone to build it. Local contractors didn&#8217;t have the expertise for such a project. So a firm from Kabul, International Building Company, got the $300,000 contract.

Work started in May and almost 1&#189; miles of the province&#8217;s first road has been completed. Local Afghans hired to do the work have caught on quickly and they&#8217;re currently working on side roads to the main stretch through town. The plan is to put almost 3 miles of cobblestone road in Orgun, essentially covering the downtown area.

Another company from Kabul, Nooristan Construction Limited, is working on a similar project in Waza Kawah. Another cobblestone road is being built in Sarobi, headed by some of those who worked on the Orgun project.

Hando said the road sends a message to other communities in the province that those who work with American forces and the country&#8217;s government are more likely to see projects in their areas.

Some of those communities might have to wait a bit longer than they&#8217;d like. But thanks to the first in a series of massive road projects by Army engineers, it&#8217;s already easier for residents living elsewhere in the province to come and see what they&#8217;re missing.

For the last several months, engineers have been busily turning a narrow, crevice-filled dirt track that connected Orgun with the political center of Sharana into a wider, smoother passage. The work still has a ways to go, but military officials say the roadwork already completed has cut the time it takes to travel the 37 miles to a fraction of what it used to be.

Lt. Col. Tim McGuire, the task force commander, said the first time he made the trip in a convoy of Humvees, it took the entire day. Now the trip takes a few hours.

Army engineers will soon converge on Sharana to start more road projects. One stretch from Sharana to Gardez should start this winter. Another road &#8212; more than three times as long as the Orgun-Sharana road &#8212; is set for the spring.