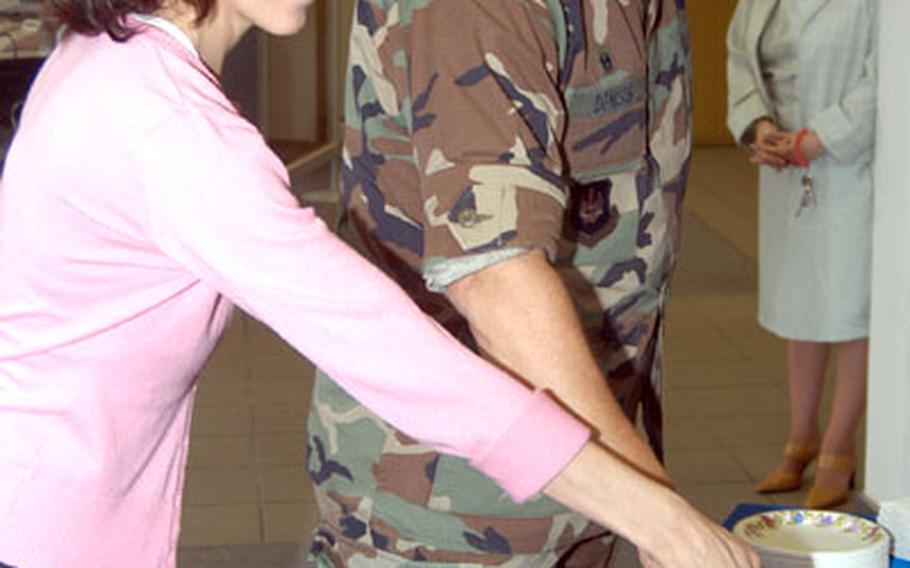 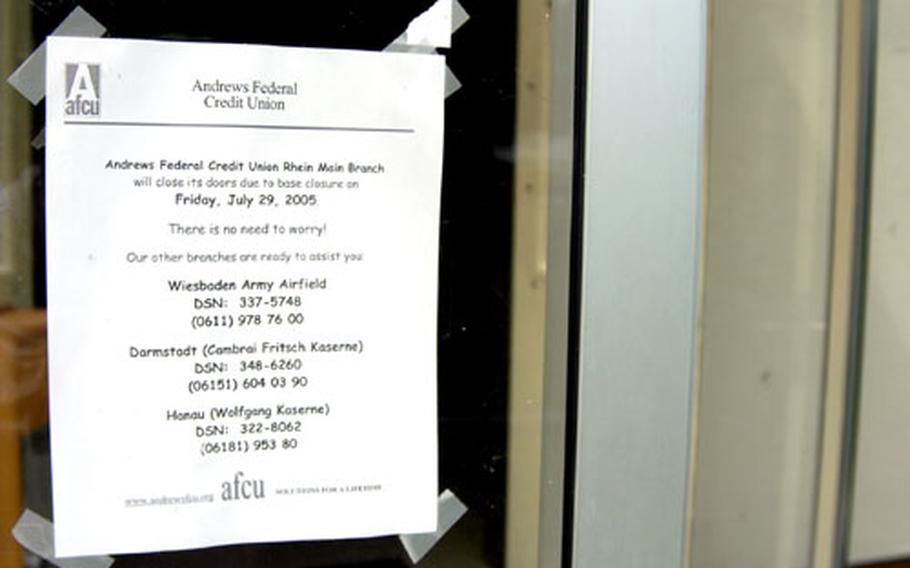 A sign on the door tells the story, as Andrews Federal Credit Union&#39;s Rhein-Main Air Base branch closed after 33 years of operating on the base in Germany. (Michael Abrams / S&S)

It&#8217;s time to cash out and say ciao to a pair of services at Rhein-Main Air Base as the installation nears its Dec. 31 closing date.

Friday saw the most recent closure at Rhein-Main with the Andrews Federal Credit Union branch shutting its doors at 4 p.m.

Amy Jenouri, manager of the credit union&#8217;s branch at Rhein- Main, was set to be the one to lock the doors for the last time, culminating the branch&#8217;s 33-year history at the base.

&#8220;There will be too much going through my head when that happens,&#8221; said Jenouri on Friday morning.

The next domino scheduled to fall will be the Cargo Pointe, an Italian restaurant located in base housing. The restaurant is set to serve its last meals Sunday.

And on Sept. 30, Rhein-Main&#8217;s base exchange, shoppette, theater and commissary are scheduled to close.

The moves come as the base nears the day when it will close entirely and be turned over to the German government.

With the recent measures, Rhein-Main is 7 percent ahead of schedule for its closure, said 1st Lt. Uriah Orland, chief of public affairs at Rhein-Main.

Military flights are scheduled to stop in October, and the base is set to close for good on the last day of 2005.

Currently, the Frankfurt International Airport, which is directly across the runways from the base and is already one of the largest international airports in the world, plans to use the Rhein- Main property to expand services.

The airlift capability at Rhein-Main will be shifted to Ramstein and Spangdahlem air bases as part of the $385 million Rhein- Main Transition Program.

The upcoming measures follow the recent closures of the base&#8217;s Gateway Inn, WIC office (the Special Supplemental Nutrition Program for Women, Infants and Children), library and medical and dental clinics.

In September, airmen will have to travel 20 miles to the Darmstadt Medical Clinic, at Cambrai-Fritsch Kaserne, for medical treatment.

Rhein-Main&#8217;s family support center collected some of the DVDs and books from the library and now offers those items, Orland said. As services close, other offices are &#8220;picking up the shortfall so the quality of life is carried on throughout closure,&#8221; he said.

Since the air base&#8217;s Gateway Inn closed July 1, no space-available lodging is authorized and no Air Force lodging program is available at Rhein-Main, to include contract quarters in the Frankfurt area. However, contingency lodging in direct support of wartime operations will be available through September.

Those seeking lodging near Frankfurt must make hotel reservations and plan for additional transportation costs. The military is advising travelers in the Frankfurt area to contact other military communities such as Darmstadt, Wiesbaden, Spangdahlem and Ramstein.