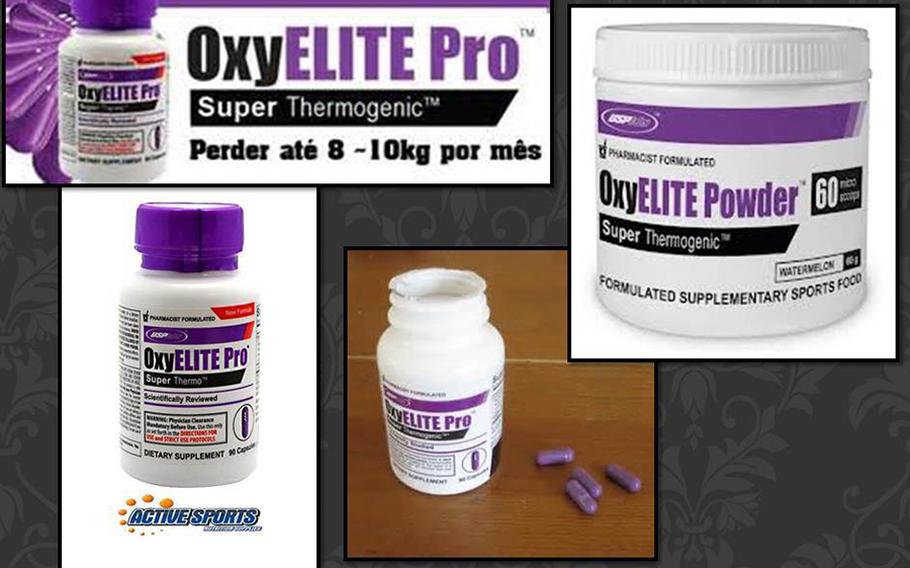 WASHINGTON — A fitness supplement that was twice pulled from exchange store shelves, first following soldier deaths and then after an outbreak of liver disease, has now been found to contain the active ingredient in the prescription drug Prozac, the Food and Drug Administration announced Saturday.

OxyElite Pro Super Thermogenic is sold as a weight-loss supplement, but the FDA said it has discovered the product contains fluoxetine, a drug used in treating mental disorders such as depression, bulimia and obsessive-compulsive disorder. Fluoxetine and other drugs in its class can have serious side effects such as suicidal thinking, seizures and abnormal bleeding, the FDA said in its warning.

The agency said consumers should not buy or use OxyElite Pro. The Marine Corps Exchange, the Navy Exchange and the Army and Air Force Exchange Service said Monday that they do not stock it.

The supplement was first pulled from military bases in 2011 after it and other supplements were found to contain the unregulated synthetic stimulant methylhexanamine, known as DMAA, which was suspected in the deaths of two soldiers at Fort Bliss, Texas.

The manufacturer, USPLabs, removed DMAA and tweaked the ingredients in 2013. But soon after the FDA said the supplement was suspected in 24 cases of nonviral hepatitis in Hawaii and appeared to contain an ingredient called aegeline, which had no history in the food supply and had not been safety tested.

Lawyers representing USPLabs wrote a letter to the FDA about its warning Saturday saying the company did not produce the OxyElite Pro found to contain fluoxetine. It said production of the supplement stopped in May 2013.

“USPLabs immediately conducted an investigation and determined that the product shown in the [FDA] public notification and tested by FDA was not manufactured or distributed by or for the company. It is a counterfeit,” Covington and Burling, a business and corporate law firm, wrote in the letter posted on USPLabs’ website.

The supplement was not listed Monday among the company’s products on its website. A separate website dedicated to OxyElite Pro contained a legal disclaimer in small print at the top and bottom of the page: “This site is not run by or affiliated with USPLabs in any way.”

The unaffiliated website also included advertisements and links to Amazon sales of EpiBurn Pro, a product labeled with the company’s logo and listed on its official website.

The USPLabs letter to the FDA said a “brief Internet search” found a Brazilian website selling OxyElite Pro and that might have been the source of the samples that the FDA found contained fluoxetine.

“Neither USPlabs nor its contract manufacturers has ever ordered or in any way handled fluoxetine for any purpose of any kind,” according to the letter.