Psychiatrist: Bergdahl likely suffered from PTSD and other disorders before his capture 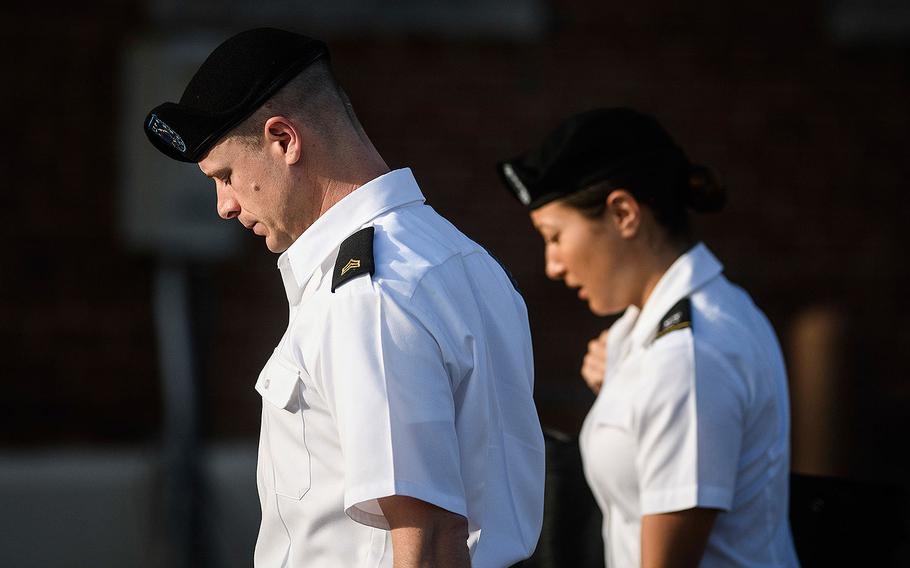 FORT BRAGG, N.C. — Army Sgt. Bowe Bergdahl was likely suffering from childhood-induced post-traumatic stress disorder and a schizophrenia-like condition that clouded his reasoning when he walked off his post in eastern Afghanistan eight years ago, a forensic psychiatrist testified Wednesday.

PTSD and schizotypal personality disorder impeded Bergdahl’s ability to understand the consequences of his actions on other people, likely leading him to desert Observation Post Mest without considering his actions’ impact on other servicemembers, Dr. Charles Morgan said.

“He wants to do the right thing,” Morgan said of Bergdahl. “Once he gets an idea that makes sense, he wants to move on it. In this case, he understood what he was doing would get him in trouble.”

Morgan, who has extensive experience working with prisoners of war, testified Wednesday during a sentence hearing in Bergdahl’s court-martial at Fort Bragg just before defense attorneys rested their case, arguing for leniency for the soldier.

Bergdahl faces up to life in prison after he pleaded guilty to desertion and misbehavior before the enemy charges, admitting he endangered his fellow troops when he left his post in June 2008. The judge overseeing the case, Army Col. Jeffery R. Nance, could hand down Bergdahl’s punishment this week.

Prosecutors and defense attorneys are expected to present their closing arguments and recommended sentences to Nance on Thursday.

Prosecutors are likely to recommend a punishment that includes time in prison. They spent three days in court laying out a case that described the massive, high-risk search efforts launched to find Bergdahl in the weeks after he disappeared, detailing severe injuries suffered by three servicemembers during those operations. One soldier, retired Master Sgt. Mark Allen, was shot in the head, leaving him paralyzed and unable to speak.

Mental health issues While Bergdahl’s mental disorders impair his understanding of other people, they do not preclude him from planning complex tasks, such as his desertion or his escape attempts when he was being held by Taliban-linked Haqqani militants in Pakistan, Morgan testified.

“He’s not dumb,” Morgan said. “The reason he doesn’t anticipate certain things is a function of his mental condition. The deficit is in relating to people.”

The conditions explain Bergdahl’s statement this week that he did not consider the military would send servicemembers looking for him when he decided to leave OP Mest in an attempt to walk to a nearby forward operating base, according to Morgan. Nonetheless, the doctor said Bergdahl knew his decision was improper.

Individuals with the personality disorder typically struggle to connect socially with other people, develop a negative self-image and suffer from anxiety. Morgan said Bergdahl displayed all of those symptoms as well as eccentric tendencies characteristic of people suffering schizotypal personality disorder.

From the stand, the doctor described an internal, self-critical commentary that runs constantly through Bergdahl’s mind but that the soldier does not recognize as his own voice. He also described an unusual fascination that Bergdahl has developed with various topics including world religions, conspiracies and self-castration.

The doctor said the mental health conditions are likely to blame for Bergdahl’s washing out of Coast Guard basic training following anxiety attacks in 2006, two years before he enlisted in the Army.

Morgan told Nance that Bergdahl has displayed a history of faulty decisions consistent with individuals who suffer from his diagnosed illnesses. Bergdahl once traveled to France in an attempt to join the French Foreign Legion without realizing people there speak French, he said.

Bergdahl’s PTSD is likely rooted in household problems that he faced as a child, Morgan said, blaming it at least partially on his father who “punched holes in walls and believed in corporal punishment.”

His years in captivity exacerbated the conditions, and it is unlikely he will ever recover, he said.

Punishment decision Though Bergdahl’s mental conditions are likely permanent, Morgan said the soldier demonstrates signs he is capable of being a productive member of society.

Bergdahl has shown an interest in working with animals, especially feral cats. A woman who owns an animal rescue shelter has offered the soldier a job at her non-profit organization caring for the feral cat population that has been relocated to a sanctuary that she runs in San Antonio, where Bergdahl has been stationed since his return to the United States.

The woman, who testified by phone Wednesday but was not identified by name, said Bergdahl possess an unusual empathy for the animals and appears to have a natural rapport with them. She called Bergdahl “the cat whisperer.”

“Animals that are usually scared and avoid people were coming up and surrounding him,” the woman said. “I don’t usually see that.”

Morgan testified Bergdahl could learn to better interact with other humans through his work with animals, an option the doctor said would be more beneficial than a prison sentence.

The psychiatrist said he worried a sentence that includes prison time could further worsen his mental conditions, primarily because confinement could trigger flashbacks to the four years that he spent held alone in a small cage.

Prosecutors have laid out their case that Bergdahl should be punished for improperly causing search and rescue operations that led to servicemembers suffering severe, life-changing injuries. Defense attorneys have countered the soldier deserves a light sentence because he has willingly helped provide the government valuable intelligence information about the Haqqani network, suffered from severe mental conditions when he left his post and withstood brutal torture at the hands of the militants for five years.

Nance could hand down a wide range of punishments from none at all to a maximum of life imprisonment, reduction in rank to private, forfeiture of all pay and a dishonorable discharge.