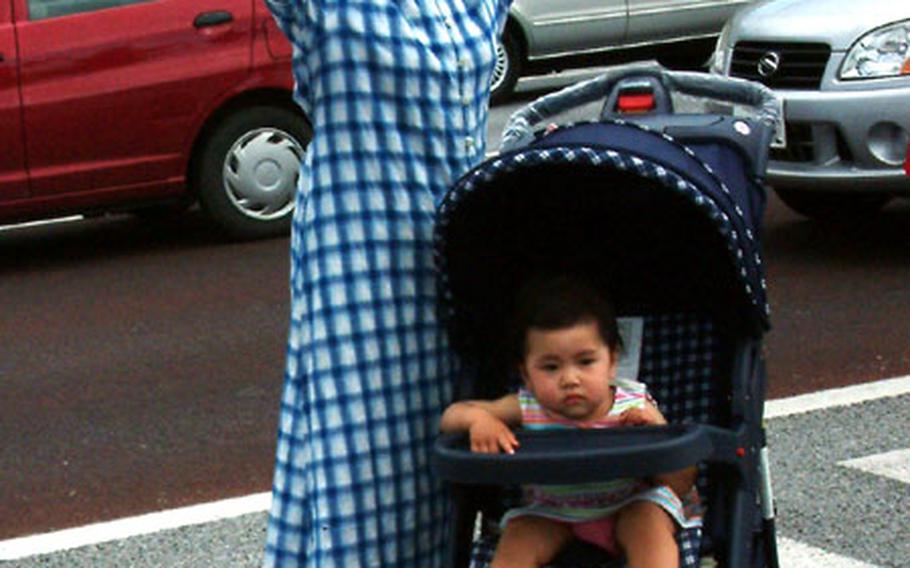 Miki Itokazu, 31, and her 18-month-old daughter, Lin, participate in Sunday&#39;s anti-base protest on Okinawa. Some 16,000 people formed a ring around the Marine Corps Air Station at Futenma, in central Okinawa, demanding the base be closed. (David Allen / S&S)

Miki Itokazu, 31, and her 18-month-old daughter, Lin, participate in Sunday&#39;s anti-base protest on Okinawa. Some 16,000 people formed a ring around the Marine Corps Air Station at Futenma, in central Okinawa, demanding the base be closed. (David Allen / S&S) 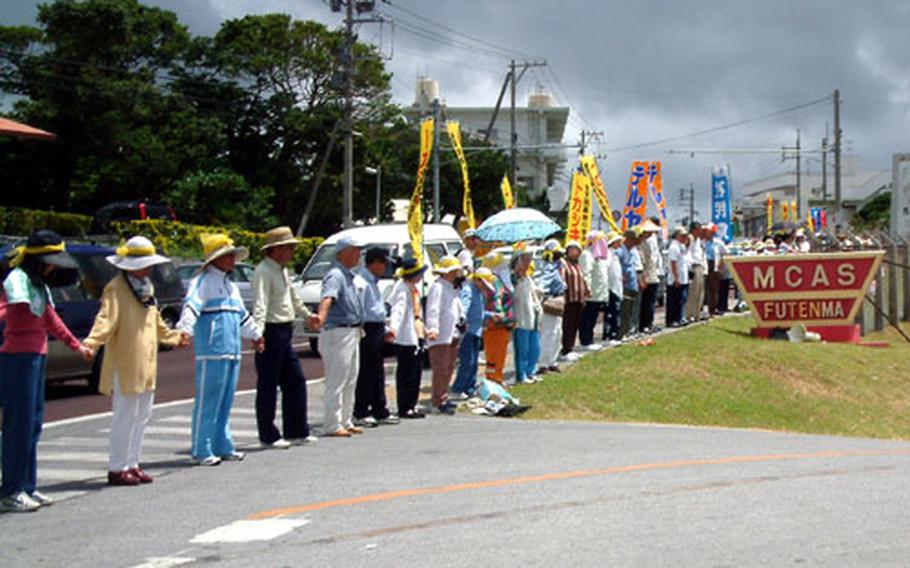 Protesters in front of a gate to MCAS Futenma hold hands during one of three successful rings around the air station Sunday during a demonstration observing the 32nd anniversary of Okinawa&#39;s reversion to Japan after World War II. Organizers say some 16,000 people particpated in the anti-base protest. (David Allen / S&S)

GINOWAN, Okinawa &#8212; About 16,000 people gathered in this central Okinawa city Sunday to surround the Marine Corps Air Station at Futenma and demand its closure.

The protest came at the end of a three-day peace march commemorating the 32nd anniversary of Okinawa&#8217;s reversion to Japan after World War II. The marchers walked along three routes crisscrossing the island, stopping at the gates to U.S. and Japanese military bases for brief rallies.

At 2 p.m. Sunday, raising their arms and cheering, they&#8217;d encircled MCAS Futenma, which had closed its gates in anticipation of the demonstration. They formed the human chain twice more before breaking to attend rallies in front of the Ginowan City Hall and at Ginowan Seaside Park.

The Marine air facility is slated to be shut down when a new airport is built on reclaimed land and a reef off Okinawa&#8217;s rural northeast shore.

However, the anti-base activists say the plan has been ensnarled in delays and never may happen. The United States and Japan agreed in 1996 to close the base within seven years after alternate facilities were found for Marine air units.

The decision to build the planned air station in northeast Okinawa, next to the Marines&#8217; Camp Schwab, was delayed and just now is in the process of having its environmental impact reviewed. Construction could be a decade or more away, Japanese officials have said.

&#8220;Noise-monitoring data recorded by city officials for the past seven years indicate that the noise level and frequency have remarkably increased,&#8221; he said at the start of the three days of protest Friday. &#8220;In some areas, aircraft fly over them more than 200 times a day.

At the rally following Sunday&#8217;s event, he said, &#8220;This is something I will bring with me when I visit Washington in July. I promise you today that I will continue to work hard to realize the closure of the air station as soon as possible.&#8221;

Nearby, banners hung on the fence and held aloft by protesters had slogans including, &#8220;The U.S. Armed Forces are invading our human rights and threatening the peace in Asia&#8221; and &#8220;To us you are not heroes, but invaders.&#8221;

MCAS Futenma, about seven miles in circumference, was encircled by protesters twice before, in 1995 and 1998. The Okinawa Peace Activity Center organized the event and announced about 16,000 people participated.