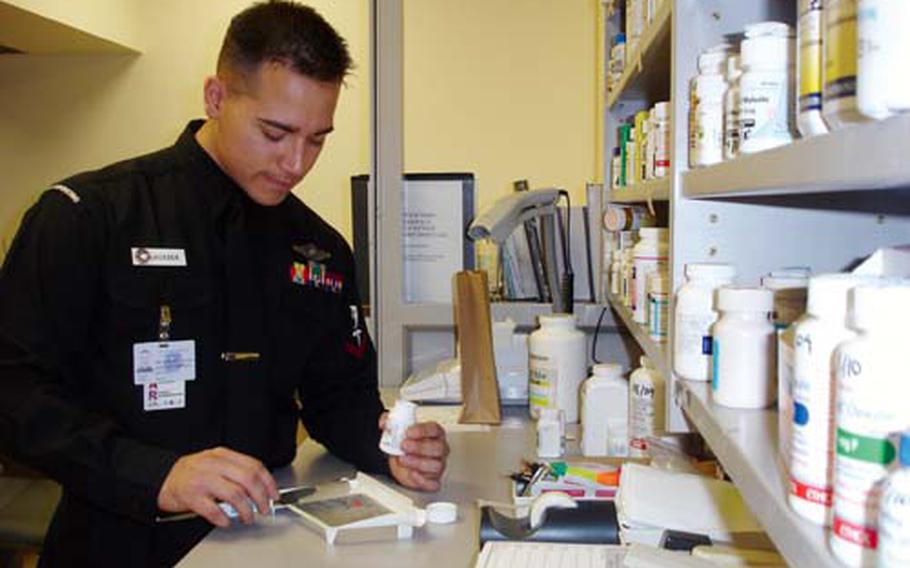 Petty Officer Nicholas Jackson prepares over-the-counter medicine packs for patients at the clinic on Capodichino. Servicemembers must now be seen by health-care providers before they can receive the “cold packs.” (Lisa M. Novak / S&S)

After reviewing guidance from the Navy Bureau of Medicine regarding pharmacy controls, officials with Naval Hospital Naples decided any medication would be handed out only after an individual was assessed by a hospital staff member and had the visit documented in the medical record.

This is a local policy and doesn&#8217;t affect health facilities in other locations.

"The biggest benefit to this is an improvement with the quality of care for the patient," said Lt. Megan Dahlke, a pharmacist at the hospital. "We know they&#8217;re going to be getting the right medication and all the medications they need to treat their symptoms."

Until now, if a servicemember or Tricare patient was feeling a bit under the weather, he or she could go to the pharmacy and fill out a form detailing their symptoms. The corpsman would give them medicine based on the information provided.

Dahlke said this wasn&#8217;t a cost issue for the hospital. But it is for those who buy the meds themselves if they don&#8217;t want to go to sick call or schedule an appointment.

"I think it&#8217;s a bad idea," said Seaman Stephen Browndeckard, a Naples-based sailor. "Giving out the cold packs are more efficient. I&#8217;ll just go buy the stuff myself rather than sit at the clinic."

"This also takes time away from the medical staff that could be treating more serious cases," said Airman Benjamin Mosley, also based in Naples.

While most viewed the policy as an inconvenience, one sailor thought it was a good idea.

"If someone has a medical problem, it&#8217;s documented in their record," said Seaman Chelsea West. "It provides better control over treatment."