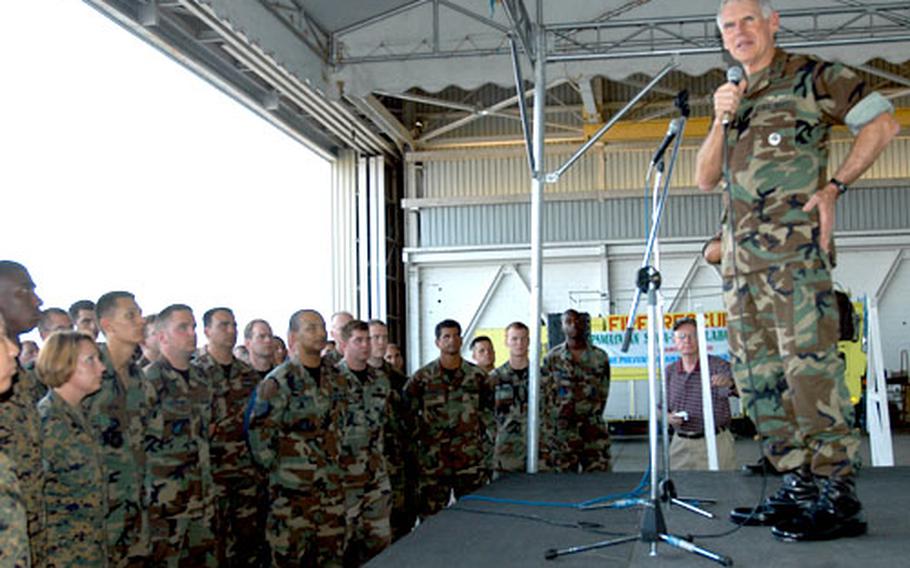 CLARK SPECIAL ECONOMIC ZONE, Philippines &#8212; He wanted to tell them in person.

U.S. Pacific Command&#8217;s top military leader, Adm. William J. Fallon, made a brief stop here Thursday afternoon to thank his troops for helping with the humanitarian relief mission in Southern Leyte, where at least 1,000 villagers were buried in a Feb. 17 mudslide.

Successfully and swiftly redirecting operations during a major exercise &#8220;on very short order has really been a treat to watch,&#8221; Fallon told a mixed crowd of soldiers, airmen, sailors and Marines at Clark for the annual Balikatan military exercise with the Armed Forces of the Philippines.

Fallon flew to Clark by helicopter from the USS Essex, one of the ships still in the region that helped deliver hundreds of Marines and supplies to the disaster area.

Fallon said he plans to attend a memorial service Friday at Guinsaugon village. The province&#8217;s governor was to lead a formal blessing and planting of a huge cross at the disaster site, according to local news reports. The U.S. military left the area earlier in the week, though a small team stayed behind to help the local government, Philippine National Red Cross and non-governmental and private volunteer organizations coordinate recovery projects.

Real-world events threatened to sidetrack this year&#8217;s Balikatan, the 22nd annual and the largest training exercise between U.S. and Philippine armed forces. The mudslide happened three days before the exercise was to open. Then, less than a week into training, Philippine President Gloria Macapagal Arroyo said a coup attempt against her government had been foiled and declared a national state of emergency.

Despite the diversions, Balikatan is to wrap up Sunday with much accomplished in two weeks, including some important military-to-military training, he said.