One soldier who brakes for Bugs Master Sgt. Joseph Cecil doing what he likes to do most — talk about his 1952 Volkswagen Beetle. Cecil says whenever he drives the car, locals wave, smile and stop to talk about their memories of Germany&#39;s ubiquitous Peoples&#39; Car. His son, Benjamin, checks out the sunroof. (enw# 61p cs) (Terry Boyd / S&S)

Master Sgt. Joseph Cecil doing what he likes to do most — talk about his 1952 Volkswagen Beetle. Cecil says whenever he drives the car, locals wave, smile and stop to talk about their memories of Germany&#39;s ubiquitous Peoples&#39; Car. His son, Benjamin, checks out the sunroof. (enw# 61p cs) (Terry Boyd / S&S) This is what he started with in October 2002: a car Cecil had to take down to the bare metal on the way to restoring it to near-perfect condition. His fluency in Germany allowed him to talk to German-speaking experts, who, according to Cecil, gave him invaluable tips on how to repair tricky details such as the car’s cable-operated brakes. (Courtesy of Master Sgt. Joseph Cecil) 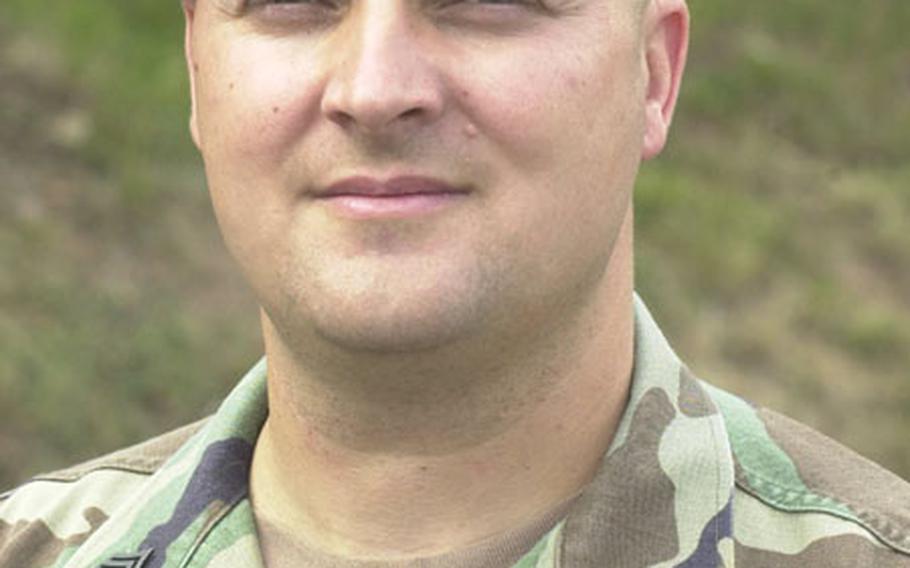 Master Sgt. Joseph Cecil restores vintage Volkswagens and can, at the least, make a strong claim to knowing more about them than any other American in uniform. (Terry Boyd / S&S)

He has a German wife, Bianca. He speaks fluent German, as does their son, Benjamin, 9.

And he has the definitive German car &#8212; a Volkswagen Beetle that makes people stop in their tracks to admire.

The Baumholder-based soldier is an authority on the Beetle. It is probably safe to say that Cecil, rear detachment noncommissioned officer in charge for the 2nd Brigade, 1st Armored Division, probably knows more about antique Volkswagens than anyone else in an American military uniform. He can identify a Bug&#8217;s year and place of manufacture at 100 paces, no small feat since they all tend to look alike to the novice.

His restored 1952 Volkswagen Model 11E &#8212; immediately identifiable to aficionados by its split rear window &#8212; is one of the best examples of the first post-war Beetle models outside Das Volkswagen AutoMuseum in Wolfsburg.

So how much could a tiny four-cylinder car that sold originally for a few hundred dollars be worth?

Joseph Cecil is evasive on the subject, but drops plenty of hints. The original air filter, which he only puts on for shows, alone is worth $450. When he told Benjamin that he could have his 1965 Herbie the Love Bug replica, Cecil says his son replied &#8220;Poppa, we both know the other Volkswagen is much more valuable.&#8221;

But Cecil&#8217;s fascination with Beetles has little to do with money. He simply loves the cars.

Despite its origins as Adolf Hitler&#8217;s affordable transportation for his Aryan masses, seeing his rolling anachronisms gives other people as much joy as it gives him, Cecil says. Like the German policeman who followed him home from work one day.

Other Germans have stopped him on the street and insisted he come home with them so they could show him their own old VW. The famous Teutonic reserve melts away instantly when he goes for his Sunday drive, or drives it in local parades, he says.

And talk, the 40-year-old Kentuckian can. He can go on for hours about VW minutiae. His ability to speak German allows him to do primary research, consulting German experts about quirky design details such as the early cable brake systems.

That ended up being a good thing because it forced him to work on the cars to the point he can pull an engine in 15 minutes.

Since the soldier bought the 1952 Bug in October 2001, he has done a bare-metal restoration, haunting flea markets, Volkswagen shows and online auctions for parts. By his calculations, the car is about 80 percent original, down to seat covers that he has carefully mended. The carpet is new, but authentic from a specialty company. The wind-up clock actually works.

Some people might only see a funny little car with bulbous fenders as the result of all that work and study. No seat belts. No gas gauge. Seats are held to the floor by wing nuts. The engine has a whopping 24.5 horsepower. It has a peculiar defrosting rig on the passenger&#8217;s side of the windshield, which was made 20 years before safety glass.

But something magical happens when Cecil turns the key and taps the starter button. The engine responds and hums that peculiar Beetle air-cooled engine song &#8212; sounding rather like a duet between a sewing machine and a lawnmower.

Cecil negotiates the potholes on Baumholder&#8217;s H.D. Smith Barracks with aplomb, never testing the little car&#8217;s considerable durability. He lets the 1197 cc engine find its own pace, never getting out of third gear as he putt-putts to the base chicken restaurant.

In the nearly empty lot, he parks his pride and joy far from the common riffraff &#8212; the mini-vans, the hoopties and the high-performance German sedans.

And there it rests, shining in the early summer sun.