One Marine's determination to walk again 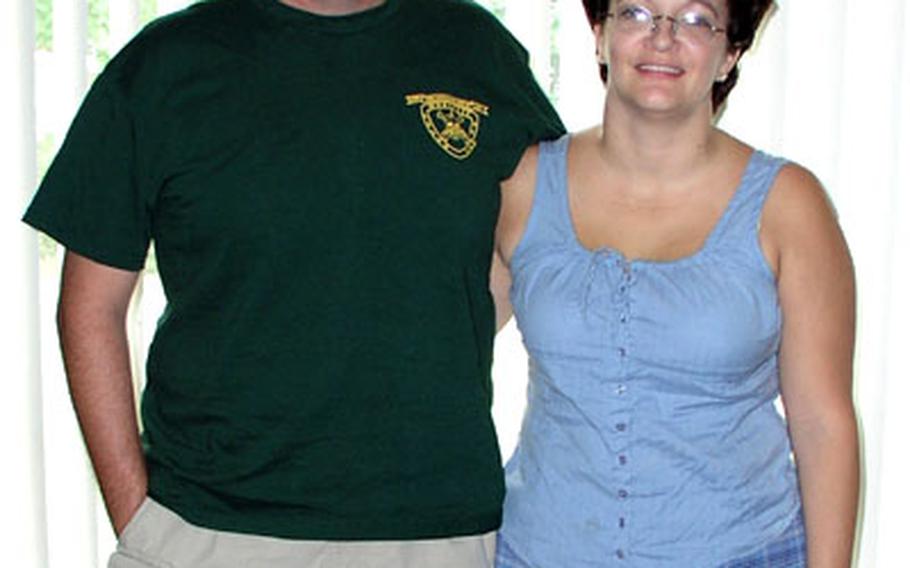 Gunnery Sgt. Jonathan White and wife Peggy have plenty to smile about now. After a parachuting accident just over a year ago it was in doubt whether he&#39;d ever walk again, but he has since returned to duty and is continuing his career. (Fred Zimmerman / S&S)

Gunnery Sgt. Jonathan White and wife Peggy have plenty to smile about now. After a parachuting accident just over a year ago it was in doubt whether he&#39;d ever walk again, but he has since returned to duty and is continuing his career. (Fred Zimmerman / S&S) 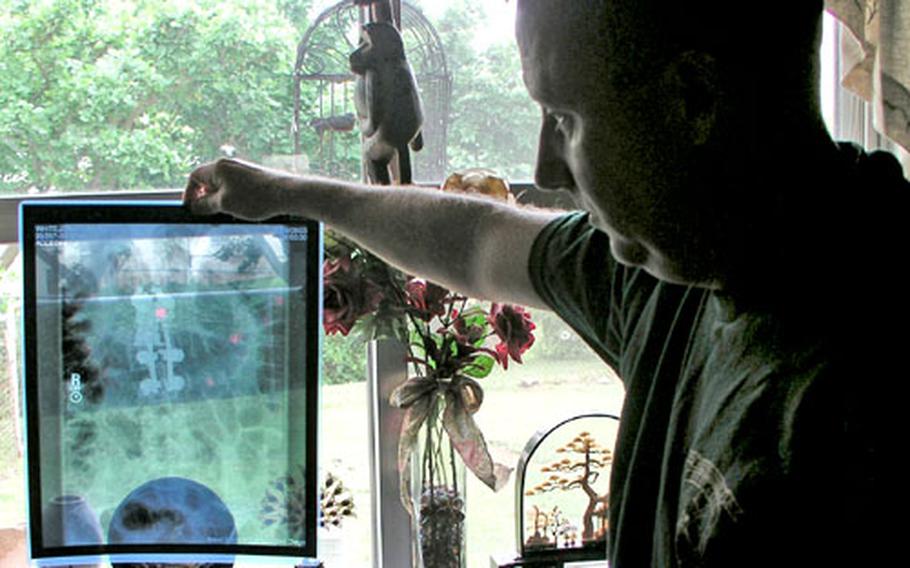 Gunnery Sgt. Jonathan White holds up an X-ray showing the two 12-inch titanium rods and six screws that were placed in his back after his parachuting accident. (Fred Zimmerman / S&S)

After a pre-jump briefing, landing practices and countless equipment checks, White and his fellow Marines were ready. Upon arrival at the island, last-minute weather checks were made before a countdown. A light in the helicopter turned green, signaling the Marines to go.

As soon as his parachute opened and White looked around to make sure everything was working right, he knew something was wrong.

&#8220;I was falling faster than everyone else, and traveling laterally across the [landing] zone faster,&#8221; White said. A quick scan of his equipment showed no problems &#8212; the parachute was fully deployed and he was able to turn.

What White didn&#8217;t know was the speed he was traveling and why he was descending so fast. He said the official report says he was caught in a major gust of cross wind, and it&#8217;s estimated that he was traveling nearly 60 mph.

White was lucky &#8212; a corpsman on hand was a reservist who happened to be a New York City Fire Department paramedic specializing in spinal injuries. The corpsman knew something serious was wrong and instructed the helicopter pilots to take White straight to U.S. Naval Hospital Okinawa.

While White doesn&#8217;t remember much about the accident, his wife, Peggy, recalls the time in the hospital clearly.

When she first went to the emergency room, doctors thought her husband simply had the wind knocked out of him.

A short while later, she said, he came to his senses.

Rosenbaum said White had no motor function in his toes and ankles, and as he worked his way up White&#8217;s body he was concerned.

The problem was in White&#8217;s back. Rosenbaum said X-rays revealed that White had fractured vertebrae. The next step, Rosenbaum said, was having a magnetic resonance imaging, or MRI, done.

Rosenbaum accompanied White for the scan and climbed onto the table to hold White&#8217;s head still. Rosenbaum said the two were nose-to-nose inside the machine when White surprised him.

Rosenbaum wasn&#8217;t sure he could hold up his end of the deal, as the initial diagnosis was that White would be a quadriplegic.

But after looking at the MRI results, Rosenbaum thought he might have a chance. There was a big chunk of bone lodged against White&#8217;s spinal cord. Rosenbaum thought that if he could perform surgery quickly and remove the pressure, White would have a shot at recovery.

So Rosenbaum approached the Whites and told them his plan. They agreed.

Within two hours of the accident, White was in the operating room.

White said he was lucky to have Rosenbaum as his neurosurgeon, as most in the field figure it&#8217;s better to be paralyzed than dead. Rosenbaum admitted that he&#8217;s a forward thinker and not many other neurosurgeons would have performed the operation.

During the nine-hour surgery, Rosenbaum pushed the bone chunk away from White&#8217;s spinal cord and inserted two 12-inch titanium rods and six screws to stabilize his spinal cord.

While Rosenbaum wasn&#8217;t sure the surgery would work, he saw a good sign in the recovery room.

After spending three days in the intensive care unit at the hospital, White was flown to Naval Medical Center San Diego for follow-up care which included one more surgery.

The trip back to the United States wasn&#8217;t smooth. White said he experienced problems ranging from the hospital not knowing he was arriving to staff members getting him out of bed and moving him around just days after surgery.

When it came time for the second surgery, White said he wasn&#8217;t quite sure what was going on. He didn&#8217;t know until afterward that doctors were removing one of his ribs. The doctors took the rib and the remaining bone fragments in his back and ground them up, placing the mixture in a cage surrounding his spinal cord. White said the material solidified into bone over the next six months.

After three weeks in San Diego, White returned to Okinawa, but still was having some problems. His legs were numb and he needed help to walk.

Within three months, White was back to work. Four months later he was running again.

In May, he deployed with his unit to the Cobra Gold exercise in Thailand. While there, he secretly prepared to run a physical fitness test. He had a 10-day window between the exercise and leave and he wanted to complete the test to prove to the Corps that he was ready to carry on.

Now that White is back to work, he hopes to be promoted soon &#8212; another reason he wanted to run a successful PFT. The E-8 selection board meets this month and without a PFT score in the system, he said, he likely would have been passed over for promotion.

Since the accident, White has returned to the scene of the accident once and was stunned by what he saw.

He said the depression his body made in the ground was about 6 inches deep. He also was shown something else that made him feel lucky to be alive &#8212; a pile of concrete rubble with steel bars poking out about 12 feet away.

While pain will be a daily reminder of White&#8217;s accident, he has no regrets.

&#8220;I&#8217;m glad it happened to me that day, out of everyone that jumped,&#8221; he said, noting the outcome might have been deadly for the other Marines since they had less experience.