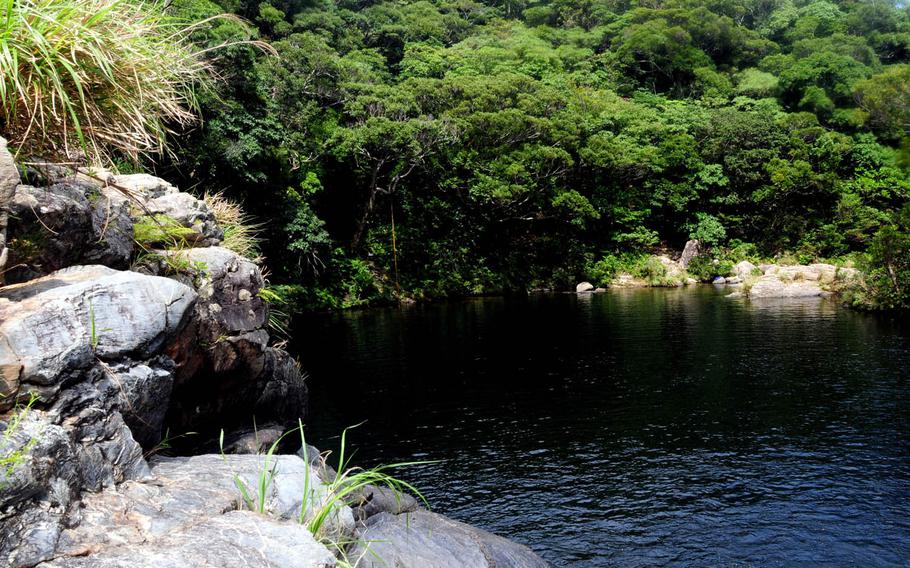 Buy Photo
The large swimming hole at Aha Falls, Okinawa. Okinawan officials are working to restrict American access to the falls in the wake of the tragic death of an airman over the weekend. (Stars and Stripes)

CAMP FOSTER, Okinawa — Okinawan officials are working to keep the U.S. military community away from Aha Falls — a spot popular with servicemembers and tourists for hiking and cliff jumping — in the wake of an airman’s tragic death over the weekend.

Shannon Purcell, 19, died Saturday after slipping and falling 15 feet into the Tanaga Gumui basin at about 12:40 p.m., according to Japanese fire and rescue officials. Purcell was observed struggling in the water, but by the time her friends reached her, she had disappeared beneath the surface. She was recovered at approximately 5:30 p.m. by Japanese fire and rescue divers.

The village also asked the Okinawa Regional Forest Office and the Okinawa prefectural government, which manage the nationally owned forests that lead to the falls and the river connected to the falls, respectively, to restrict access to the area.

“It is not a site that we advertise as a tourist spot, nor park or recreational spot,” said Kunigami village tourism official Kosuke Miyazato. “Basically, it is an area where no one should be. Drowning accidents have been happening there. Despite that, people continue to go there.”

Miyazato said he did not know how Americans hear about the falls, but they continue to come in droves.

A quick internet search on Wednesday showed several American-friendly travel sites with pages about the falls. In the comments section of Okinawahai.com, Americans described rope swings and the beauty of the site, but they also described its dangers.

“There are a few places to jump off of the rocks that are anywhere from 5-15ft high, but YOU MUST CHECK THE DEPTH before jumping,” a commenter wrote. “There are rocks beneath if you don’t get it right.”

Local officials said that the falls are known in the community for frequent water-related accidents. Signs warning of deep water and a high risk are posted in both English and Japanese. Due to the dangers and its reputation, locals said that they stay away for the most part.

“We take the accident seriously and asked the military through the Okinawa Defense Bureau to disseminate word that it is a dangerous place and not a play spot,” Miyazato said.

Kunigami fire officials said they were at the falls two days prior to this incident, when a 45-year-old Japanese man fell and required rescue.

Prior to Purcell’s death, a Japanese citizen died at the falls on Aug. 20, 2014, officials said.

Since August 2013, there have been two deaths, another near drowning, 10 falls resulting in injury and rescue, and several cases of broken bones.

Purcell was part of a group that arrived at the falls at about 11 a.m. Saturday, a spokesman for the Okinawa prefectural police in Nago said, citing the Americans at the scene. They were diving from the rocks into the basin, swimming and hiking in the area when the incident occurred.

The cause of the accident is still under investigation, but the spokesman, citing witnesses, said Purcell fell after losing her footing. Her friends called for help and searched for her while they awaited police and fire and rescue officials.

Japanese fire and rescue officials arrived at the scene at 1:20 p.m., they said. Police arrived about 30 minutes later.

The 18th Wing’s 33rd and 31st Rescue Squadrons responded to the scene at about 5 p.m., according to an Air Force statement. Purcell was found approximately 30 minutes later and brought to a hospital, where she was pronounced dead at about 6:30 p.m.

Purcell was found at the bottom of the approximately 26-foot-deep basin, Japanese fire and rescue officials said. She wore a T-shirt and shorts but no life jacket. Rescue divers were hampered by increased water volume at the falls after heavy morning rains and low visibility.

In the wake of the tragedy, the Okinawa defense bureau vowed to take appropriate measures.

“The access to the falls is currently under our management following the return of the training area,” said a spokesman for the defense bureau. “We will take appropriate measures by consulting with parties involved.”