A protester hangs a sign on the fence at Tengan pier Monday afternoon. The group had been protesting the likely arrival of 24 Patriot missiles since Sunday night. (Megan McCloskey / S&S)

A protester hangs a sign on the fence at Tengan pier Monday afternoon. The group had been protesting the likely arrival of 24 Patriot missiles since Sunday night. (Megan McCloskey / S&S) 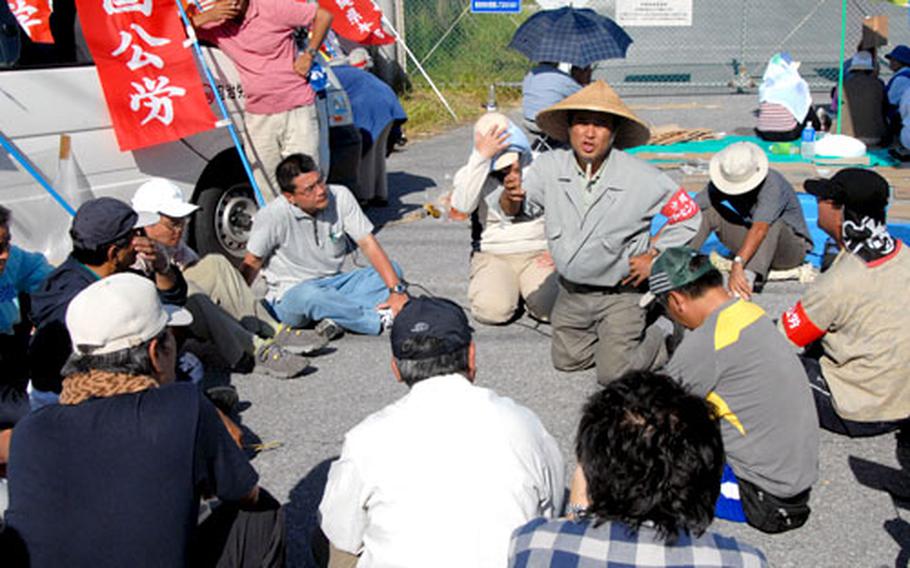 After about 17 hours of protesting, the leaders strategize about their next move. They took a hand vote and decided to break up into shifts. (Megan McCloskey / S&S) 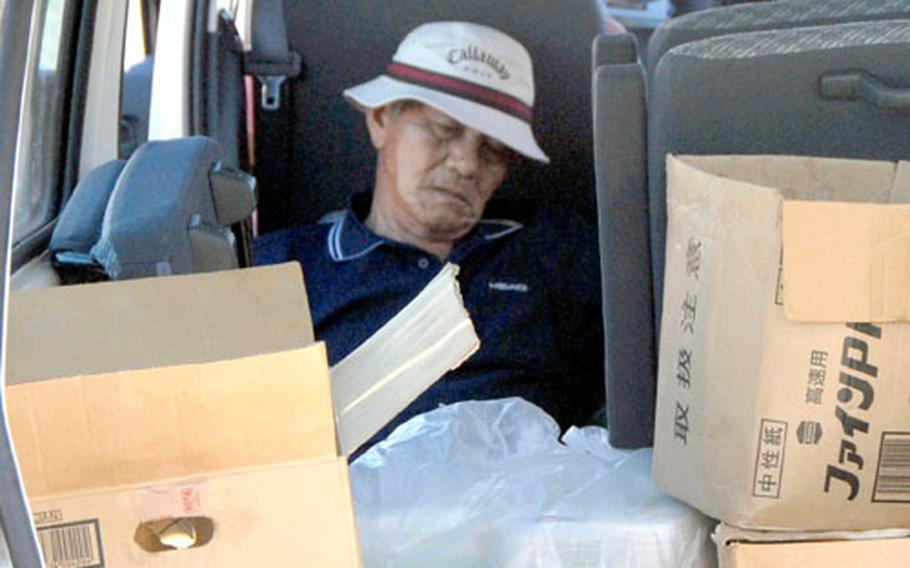 After about 16 hours of protesting, one of the group members catches some shuteye in the food service van. (Megan McCloskey / S&S)

URUMA &#8212; About 150 people camped Sunday night outside Tengan Pier near Okinawa&#8217;s Camp Courtney and remained Monday in an attempt to block Patriot missiles from being transported to Kadena Air Base.

&#8220;We will fight to the death to stop the missile interceptors from being put on our island,&#8221; Tokushin Yamauchi, one of the organizers said to the group, mostly peace and labor activists. &#8220;Weapons that lead to war must not be allowed.&#8221;

Washington and Tokyo agreed in May to deploy PAC-3 missile interceptors within existing U.S. military facilities in Japan. Equipment for the defense system started being moved during the night from the military port at Naha to Kadena last week.

The weekend&#8217;s protesters gathered anticipating that the missiles themselves were going to be transported.

Kadena spokeswoman Maj. Dani Johnson said she could not confirm whether the Patriots were in port or when they were to be moved to the air base. She said the military will be off-loading and moving equipment for the next couple of weeks from both Tengan Pier and Naha Military Port.

She also would not comment on whether the protesters had disrupted the transport of the missiles from Tengan to Kadena.

Sunday night, the protesters sat on the ground outside the Highway 75 exit from the Tengan Pier as two military trucks stood on the other side of the gate.

Watching was Shoichi Chibana of Yomitan.

&#8220;I feel that something terrible is about to happen,&#8221; he said. &#8220;Deployment of the interceptors is a preparation for a counterattack from North Korea. Like they did in Afghanistan and Iraq, the United States might attack North Korea next. It is obvious that PAC-3 is to protect Kadena Air Base from an enemy attack.&#8221;

As the gate opened and one of the trucks crept through, protesters reluctantly moved out of the way, with some shouting &#8220;Go home!&#8221; at the two servicemembers inside the vehicle.

Some protesters said the installation of the missile defense system at Kadena, one of the largest U.S. military bases in the Asia-Pacific region, would make it and Okinawa more of a target.

&#8220;With PAC-3, Kadena Air Base will be further strengthened, making Okinawa an ultimate military fortress island. This, we must stop at any cost.&#8221;

Said Katsumi Chinen, who flew from Miyako Island to join the protest: &#8220;If the military really wants to protect us, they can just leave our island so that we won&#8217;t be an enemy target.&#8221;

Stars and Stripes reporter Megan McCloskey contributed to the story.