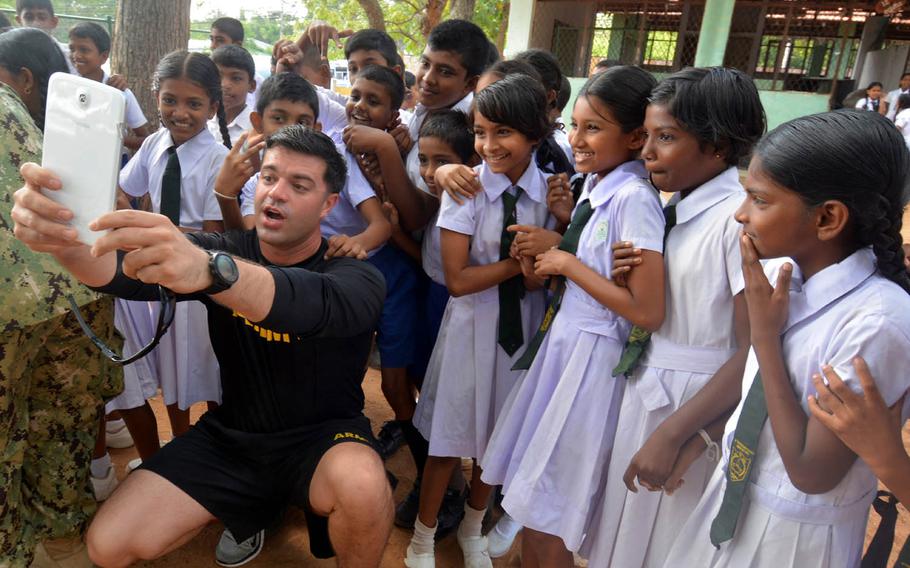 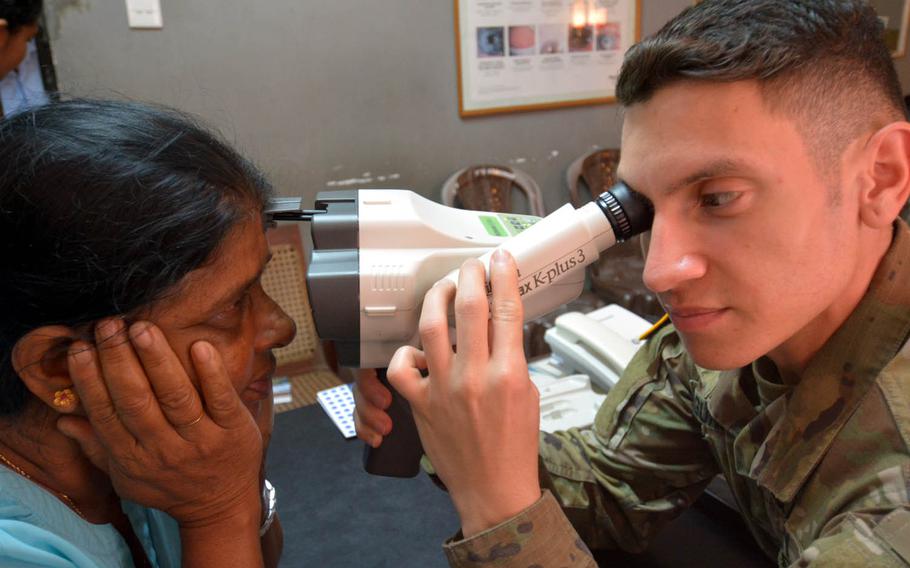 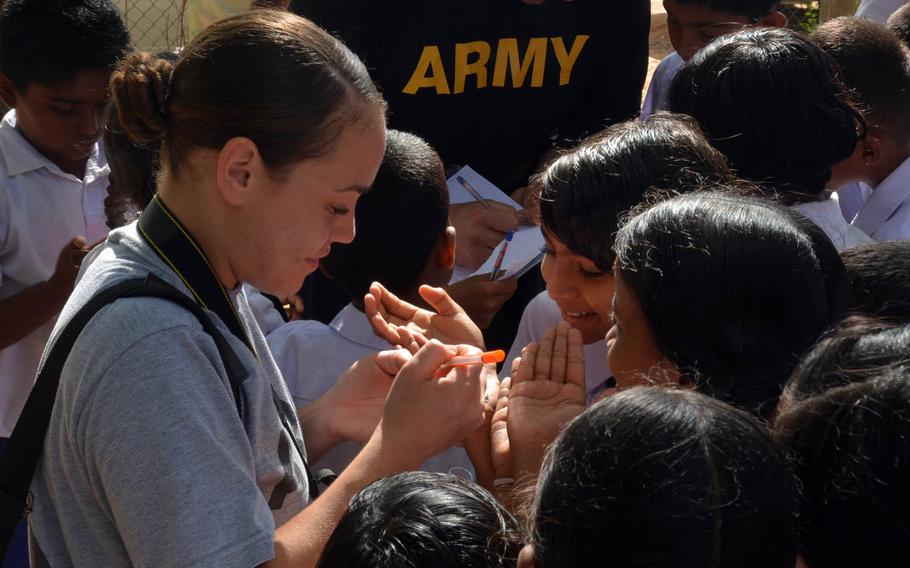 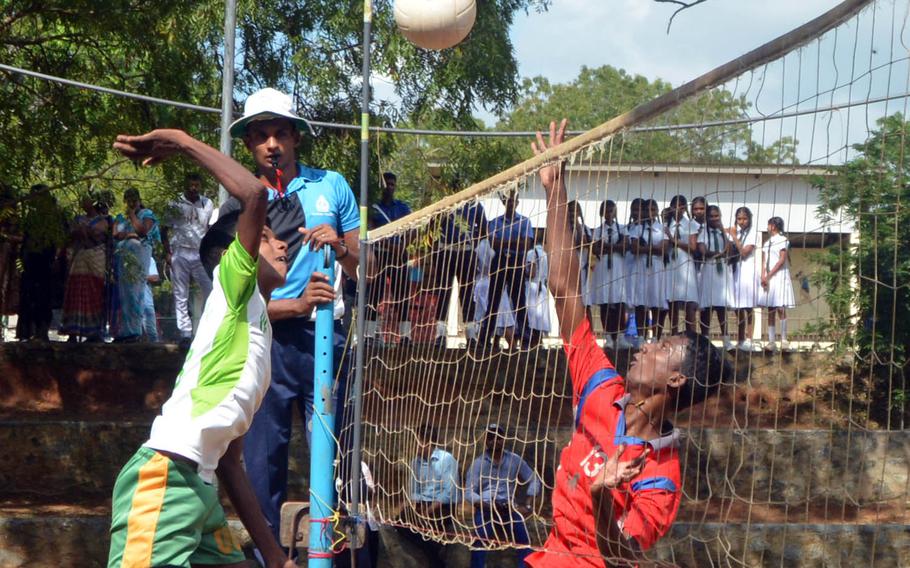 Buy Photo
Skilled Sri Lankan teens play volleyball alongside U.S. servicemembers at a school in the village of Nonagama, on Sri Lanka's south coast. The game was part of Pacific Partnership 2017, a humanitarian and disaster-relief planning exercise. (Erik Slavin/Stars and Stripes)

HAMBANTOTA, Sri Lanka — The line began forming hours before sunrise at Kirinda Peripheral Hospital, in a rural, south coast town known mostly by the nation’s big-city folk for its nearby elephant sanctuary.

The Sri Lankan, U.S. and Australian military teams expected about 400 patients to show up. By afternoon, there were well over 1,000.

“It’s cool just to help people,” said Sgt. Jorge Laguna-Ramos, of the 62nd Medical Brigade at Joint Base Lewis-McChord, Wash. “They don’t have much, and we have a little bit that we can do and help them. It’s rewarding.”

In this town and others nearby, nearly everyone lost a loved one or knows someone who did in the 2004 tsunami that ravaged much of South Asia. About 30,000 Sri Lankans died in the disaster, and the south coast of this island nation of 21 million bore some of the worst damage.

The tsunami’s destruction added to the hardship in Sri Lanka, which was still in the grip of a decadeslong civil war. The war ended in 2009, and since then Sri Lanka’s economy has grown and its poverty levels have fallen sharply, according to the World Bank. Its stability and strategic location near one of the world’s busiest shipping routes have drawn renewed interest from the region’s powers — particularly from China, which has used ports here as military submarine docks.

Officials say the U.S. also has a critical interest in that shipping lane, and in developing stable, strategic relations with nations along the Indian Ocean and Asia-Pacific region waterways.

So it is no coincidence that, following multiple port calls last year and a visit from a four-star admiral, the U.S. brought the Pacific Partnership exercise to Sri Lanka for the first time.

The humanitarian assistance and disaster relief-preparedness mission, now in its 12th year, began in response to the 2004 tsunami.

“If we leave the mission here with a stronger relationship and a sense of accomplishment on both sides, I think that is success,” said Capt. Stanfield Chien, Pacific Partnership mission commander and deputy commodore of the San Diego-based Coastal Riverine Group 1.

Sri Lankan servicemembers now have a better idea of what the U.S. can provide if another disaster strikes. They observed as Marines pumped hundreds of gallons of seawater from alongside the USNS Fall River at its pier in Hambantota’s new port.

The water can be drinkable in 20 minutes, said Staff Sgt. Devario Graham, of the Okinawa-based 9th Engineer Support Battalion.

Within two hours, they can provide a village with water containing less than 2 parts per million of particulates. For comparison, the U.S. allowable standard for the drinking water in a U.S. supermarket is 500 ppm.

Marines later were scheduled to team with Sri Lankan servicemembers to transport the water aboard a helicopter.

Meanwhile, the military learned about a part of the country about which they previously knew little. A team from the Army's 85th Civil Affairs Brigade gauged the effectiveness of the military’s engineering, medical and community projects over a nearly two-week period.

Should another disaster occur, that knowledge could prevent a recurrence of the bottlenecks that residents said affected aid during the 2004 tsunami.

“Many agencies supported the recovery, but resources were not distributed equally,” said J.A. Renuka Jayawardena, a school principal in the village of Nonagama. “Some places were given a lot, but there were some places that needed a lot and didn’t receive it.”

At the general hospital in Hambantota, military doctors saw a lot of the same equipment they use in their practices. They didn’t just take over on surgeries — as one doctor said he saw happen in developing countries years ago. Here, they collaborated.

“I just delivered a baby,” an Australian care provider told her American colleagues, beaming as if it had been her first delivery — which it wasn’t, by a long shot.

For Petty Officer 1st Class Amran Haji Omar, a Navy corpsman based at Marine Corps Base Quantico, Va., this mission may have meant more than for anyone else.

Haji Omar was born a Sri Lankan citizen in the capital of Colombo. He later joined the Navy and became an American citizen in 2012.

“People focus on the weapons and the high-dollar stuff, and the medical field can get left behind,” he said. “I’m pretty proud to come here and help with that, because that’s the field I chose.”

After leaving Sri Lanka this month, servicemembers and civilians aboard the USNS Fall River are scheduled to continue the Pacific Partnership exercise in Malaysia and Vietnam.