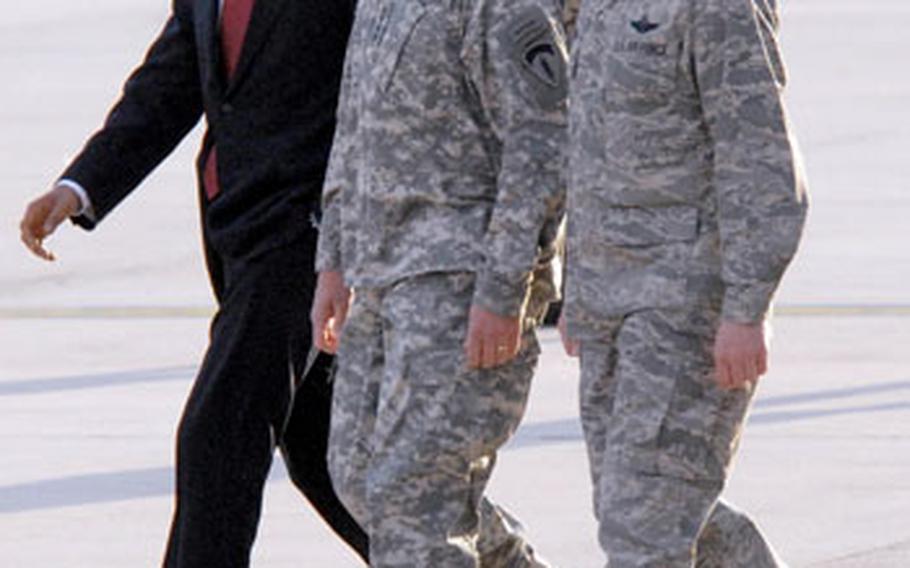 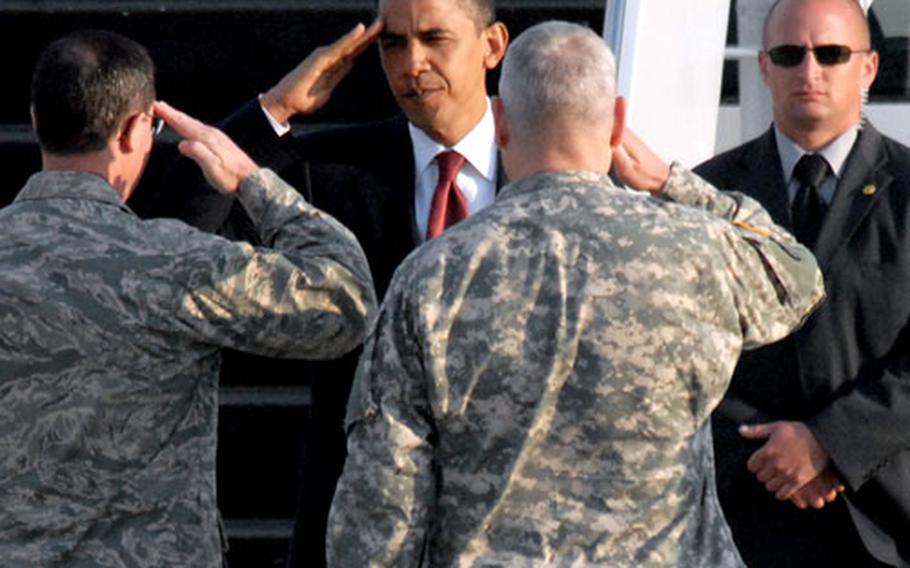 President Barack Obama waves to the crowd as he boards Air Force One. (Michael Abrams / S&S) 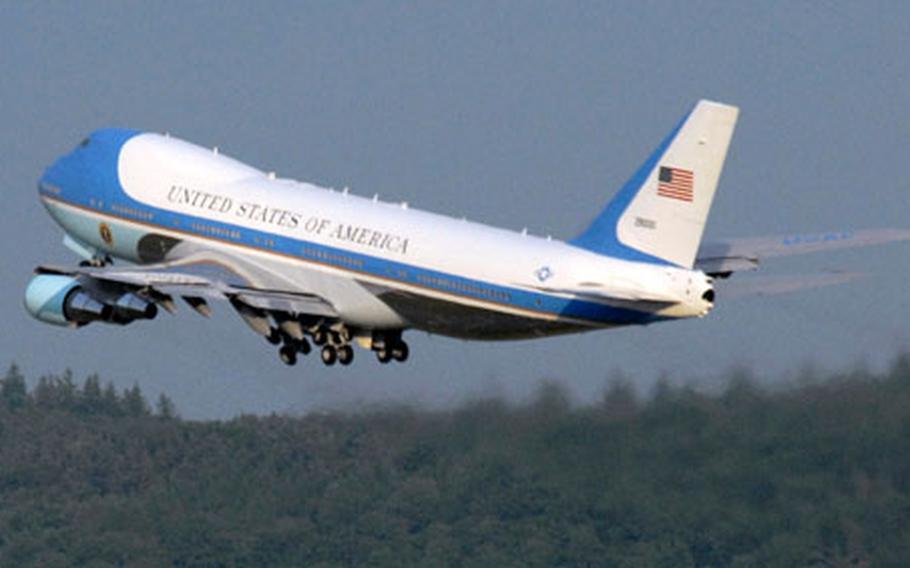 Air Force One lifts off from Ramstein Air Base. (Michael Abrams / S&S) Part of the crowd hoping for a glimpse of President Obama on a Ramstein Air Base street Friday. (Michael Abrams / S&S)

RAMSTEIN AIR BASE, Germany &#8212; Air Force One carrying President Barack Obama on a whirlwind trip to the Middle East and Europe touched down at this base in the picturesque German countryside at 5:45 p.m. local time.

A crowd of onlookers gathered on an embankment behind a sea of news vans to get a glimpse of the president and Air Force One hours before it landed.

Ortiz said she came all the way from San Antonio, Texas, with her husband, Ernest Ortiz, an Air Force retiree, to see Obama. They planned to continue their European trip in London.

Graeber said he didn&#8217;t see Obama get off the plane, but he was hoping to get a glimpse of the president leaving.

When President Obama arrived, he exited the plane alone, waving to about 60 members of the media before he was greeted by Maj. Gen. William Chambers, United States Air Forces in Europe vice commander, and the 435th Air Base Wing Commander, Col. Donald Bacon. His brief visit lasted less than three hours.

Obama was quickly ferried away by a waiting sport utility vehicle accompanied by Secret Service, Polizei cars and a caravan of other vehicles to head to nearby Landstuhl Regional Medical Center for a short visit to see the wounded servicemembers being treated there. He arrived after visiting the Buchenwald Concentration Camp earlier in the day and was slated to fly on later to attend the D-Day 65th anniversary commemoration in Normandy on Saturday.

Obama met with about 100 injured servicemembers during a two-hour stop at Landstuhl Regional Medical Center on Friday evening, where he visited with patients in their beds in the Intensive Care Unit and another hospital ward, as well as with a standing crowd at the USO Warrior Center.

He presented about a half a dozen Purple Hearts, base officials said, and shook hands with everyone, said seven servicemembers who sat down to interviews with the media after the president&#8217;s visit. The group said they were nervous, emotional and excited to meet the president.

&#8220;It actually brought a tear to my eye,&#8221; said Army Sgt. Matt Berth, 26, a member of the Wisconsin Army National Guard who was recently injured in Afghanistan.

Unable to walk without crutches due to balance issues, Berth made a point of standing with assistance from Cpl. Steven Baker while Obama pinned a Purple Heart on his uniform.

What stood out for Baker was that Obama seemed to genuinely care for the servicemembers. &#8220;He was saying he prays for us before he goes to sleep at night and that we&#8217;re the first people he thinks about when he wakes up.&#8221;

Servicemembers said they got wind of the presidential visit a few days ago, but many didn&#8217;t have time to tell their families back home about it.

Bacon, like the troops at Landstuhl, said meeting the president was a first for him, and it was something he had looked forward to. The whole visit took about a week or a week and a half to prepare for, he added.

&#8220;The most important thing is to have him see the wounded warriors,&#8221; Bacon said before the president arrived.

Bacon described meeting the nation&#8217;s 44th president as intimidating at first, but he said the president&#8217;s cordial demeanor quickly put him at ease.

The president noticed the crowd eagerly anticipating his arrival and said he appreciates everything servicemembers do for the country, Bacon said.

Obama was sent off by U.S. Army Europe commander Gen. Carter Ham and former USAFE Vice Commander Maj. Gen. Marc Rogers, who is slated to get another star and become the Air Force Inspector General.

He met briefly with the generals and other servicemembers before he was whisked away in Air Force One.