No butts about it: DOD wants you to quit 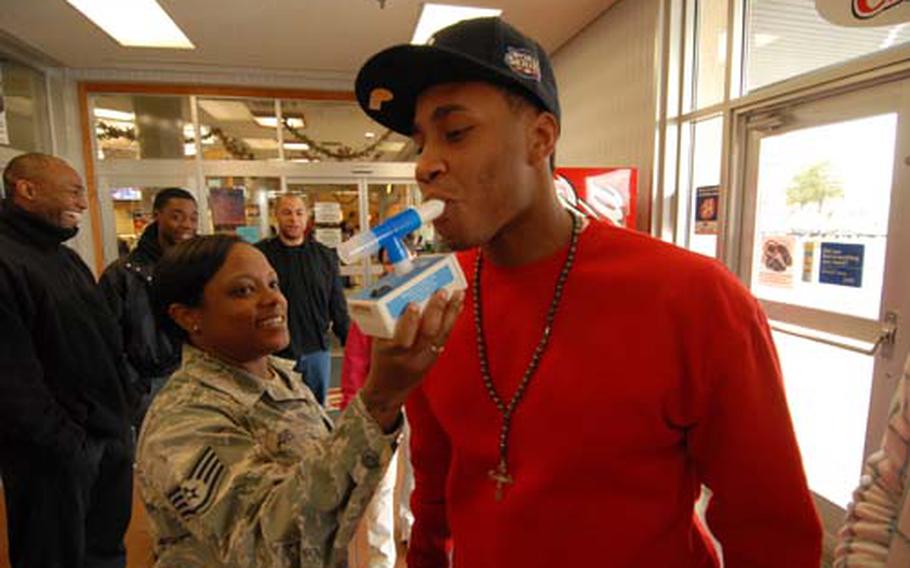 Military health workers were full of gimmicks for the 2009 Great American Smokeout, an American Cancer Society campaign supported by bases around the world. It aims to get people to stop using tobacco for at least 24 hours.

Those who went cold turkey at Misawa Air Base, Japan, got a coupon for a free turkey sub, while students at bases in Lakenheath and Mildenhall, England, received flyers on the dangers of smoking in hopes they could convince their parents to kick the habit.

&#8220;The military tells us to be healthy, but the only way you can get a break from the workday is if you&#8217;re a smoker,&#8221; said Lisa Berritella, an Army wife and former soldier who participated in a smokeout walk at Camp Zama.

Efforts to discourage tobacco use and help troops quit have become commonplace in the last decade as the Defense Department grapples with ballooning health care costs and ways to keep troops healthy in war time.

While health care workers have stepped up anti-smoking outreach, some commanders have taken a more forceful tack, such as banning troops from smoking in base housing and while on duty.

Misawa earlier this year banned smoking in all housing with communal air-conditioning and heating systems and some others with independent systems. Base health officials said it has contributed to more people trying to quit.

&#8220;It&#8217;s starting to get colder out now,&#8221; making the trip outside to a designated smoking area less attractive, said Capt. Jennifer Bradley, flight commander for the Health and Wellness Center at Misawa.

Military-wide efforts include the recently launched Web-based campaign &#8220;Quit Tobacco &#8212; Make Everyone Proud;&#8221; a proposal to distribute free over-the-counter quit-smoking aids, such as nicotine gum and patches; and a 24-hour telephone support line for those trying to quit.

Still, anti-tobacco efforts remain piecemeal for the most part. But that could change if the Pentagon adopts a proposed blanket ban on tobacco now under consideration.

Military health affairs officials are still digesting a study released this summer by the Institute of Medicine that suggested banning both the consumption and sale of tobacco within the military.

Commissioned by the Defense and Veterans Affairs departments, the study drew instant fire from servicemembers who said it could negatively affect recruiting and hurt troop morale, particularly for those serving in combat zones.

The Pentagon responded quickly, saying it would not prohibit tobacco use downrange.

But officials have yet to propose any new policies that would move the DOD closer to a widespread ban on the consumption and sale of tobacco, which the study said could take up to 20 years to fully implement.

Eliminating smokers from the ranks could eventually save billions of dollars spent to treat active-duty troops and retirees with smoking-related illnesses, though the savings would likely take years to accumulate.

However, the financial impact of banning the military&#8217;s sale of tobacco products would be almost instant.

Tobacco is big business for the military, which funnels profits from the sale of cigarettes and other goods to recreational activities for troops. Tobacco sales at military exchanges worldwide generated $672 million in 2008 alone.

The potential blow to the revenue stream is part of the reason the Pentagon has been slow to adopt a drastic ban on tobacco, said Charles Connor, president and CEO of the American Lung Association.

&#8220;Merely because a revenue stream is profitable and funds a good outcome does not mean we should be selling the product,&#8221; said Connor, a retired Navy captain.

The American Lung Association is lobbying military leaders to start focusing anti-tobacco efforts on junior noncommissioned officers in hopes it would help reduce tobacco use in the enlisted ranks, which accounts for a majority of military smokers.

These impressionable young enlistees are likely to pick up the same habits of their sergeants, Connor said.

Stars and Stripes reporter T.D. Flack contributed to this story.

By the numbers: Military smoking rates and costs32 percent &#8212; Number of servicemembers who smoke. The Army has the highest smoking rate (38 percent) and the Air Force the lowest (26 percent). Deployed servicemembers are 50 percent more likely to smoke.

22 percent &#8212; Number of veterans who smoke. About six in 10 express interest in quitting.

20 percent &#8212; Smoking rate among civilians. An estimated 44.5 million Americans smoke, resulting in death or disability for half.

$5 billion &#8212; Cost to the Department of Veterans Affairs to treat chronic obstructive pulmonary disease, an ailment that is caused by smoking.

$564 million &#8212; Additional costs of tobacco to the military health system in 2006, primarily from caring for people with cardio-vascular disease and respiratory problems.