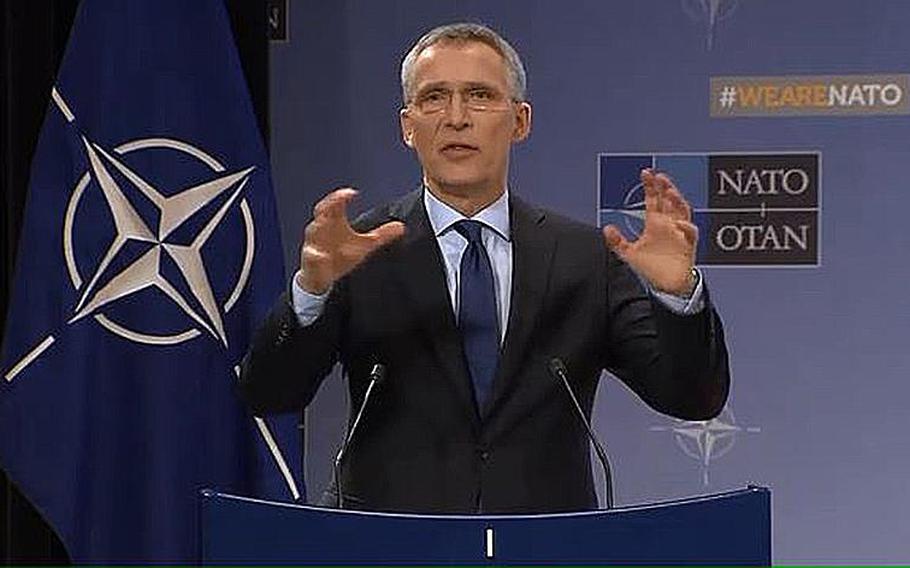 NATO Secretary-General Jens Stoltenberg talks to the media ahead of the NATO defense ministers meetings in Brussels, Tuesday, Feb. 13, 2018. (Courtesy of NATO)

Nearly half of NATO allies are still not on track to meet defense spending goals, falling well short of an alliance pledge that also has become a U.S. demand for all 29 members.

Based on current spending projections, Secretary-General Jens Stoltenberg said Tuesday that he expects 15 allies to spend at least 2 percent of their gross domestic product on defense by 2024. In 2014, NATO agreed that within 10 years all members would hit the spending target.

“What we have seen so far is a good start, but we still have a long way to go,” Stoltenberg said at a news conference in Brussels that came ahead of a meeting Wednesday of NATO defense ministers.

In 2018, eight allies are expected to reach the 2 percent benchmark, up from just three in 2014, Stoltenberg said.

However, for Washington, the failure of many European countries to dedicate more resources to defense or lay clear plans for reaching spending goals has long been a political flashpoint. President Donald Trump has made the issue the focal point for his dealings with NATO, frequently calling out allies for their spending shortcomings and suggesting that U.S. commitment to the alliance hinges on members boosting their defense investments.

“America will meet its responsibilities, but if your nations do not want to see America moderate its commitment to this alliance, each of your capitals needs to show support for our common defense,” Mattis said in February 2017.

On Wednesday, Mattis will be back in Brussels, where defense spending again will be on the agenda. Much focus will likely be on Germany, Europe’s economic power, which still only spends a little over 1 percent of its GDP on defense.

Still, Stoltenberg highlighted the progress on defense spending in recent years, noting that allies have stopped their cuts and have begun gradually increasing their budgets.

NATO allies aside from the U.S. have added $46 billion to defense budgets in the last three years, Stoltenberg said. European allies and Canada also have invested $19 billion more on major equipment during that same time, with 22 allies expected to invest 20 percent or more of their defense budgets on major capabilities by 2024.

“This should lead to significant improvements to our forces and their readiness,” Stoltenberg said.

However, pressure will remain on NATO to ramp up spending across the board, which is a drum Stoltenberg said he still continues to beat.

“We have to deliver,” he said.