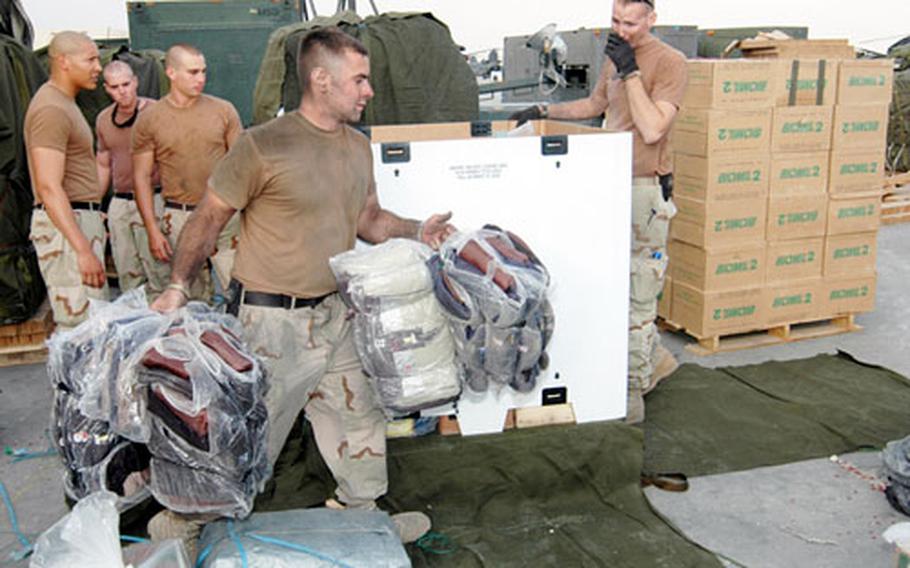 Spc. Bryan Jackson, front, and other parachute riggers with Logistical Task Force 307, based out of Bagram Air Base, Afghanistan, load pallets with humanitarian supplies this week. (Adrian Schulte / U.S. Army)

Spc. Bryan Jackson, front, and other parachute riggers with Logistical Task Force 307, based out of Bagram Air Base, Afghanistan, load pallets with humanitarian supplies this week. (Adrian Schulte / U.S. Army) MONS, Belgium &#8212; A NATO air-bridge to earthquake victims in Pakistan began Wednesday even as the nation struggled to get its arms around the size of the disaster, U.S. military officials said during a Wednesday press conference.

Four C-130s sat on a runway at Incirlik Air Base, Turkey, loaded with winterized shelters, blankets and stoves, waiting for a time slot in which they could fly to the Islamabad airport, which has been overwhelmed by aid flights since the Oct. 8 earthquake.

The NATO Response Force, commanded from Lisbon, Portugal, by Vice Adm. John Stufflebeam, was frantically calculating what airlift and medical assets were available and useful in locations difficult to reach because of high altitude, mountainous terrain and destroyed roads.

As the death toll climbed to 79,000, planners and rescuers faced pressure to deliver the goods before the harsh Himalayan winter descended on the 3 million left homeless.

&#8220;A number of people who have been displaced are also injured,&#8221; said Stufflebeam, speaking by teleconference from Lisbon. &#8220;The numbers are hard to verify and even [Pakistan authorities] have had a difficult time in understanding the magnitude in terms of absolute numbers.

&#8220;It&#8217;s a fact that thousands of people are lost already. Small villages are burying their dead, and therefore it&#8217;s hard to have exact figures. But it is becoming clear there is an urgent need for deep medical attention, and therefore capabilities such as field hospitals with surgery capability are needed and Pakistan is asking for that.&#8221;

Steep ravines make it hard to drop supplies from the air.Light, nimble helicopters that could best navigate the terrain are in short supply.The airport closest to the scene, located in Islamabad, can receive only a finite number of planes and cargo per day.The best feasible locations to set up field hospitals were not yet clear.Doctors from charity organizations have already gone to Pakistan in great numbers and are helping, Stufflebeam said. But they&#8217;re unable to perform optimally because of a lack of well-placed, well-equipped field hospitals.

One U.S. Army medical team, the 212th Mobile Army Surgical Hospital, has been waiting nearly a week to depart from Germany to Pakistan because of uncertainty of over the placement of their field hospital.

NATO had sent a six-man team to Islamabad to assess the needs, and their comrades were waiting back in Turkey and Europe for advice on how best to proceed.

At Ramstein Air Base, Germany, which, with Incirlik, would serve as NATO&#8217;s main airlift hubs, U.S. troops stood ready to unload supplies from trucks, plan loads for planes, build pallets, and manifest passengers and equipment. But there were no planes available to load.

Several nations were expected to fly planes through Ramstein under the NATO flag, and separate U.S. assistance was being brought together.

&#8220;It has to be extremely well-choreographed,&#8221; said Air Force Lt. Col. Derek Kaufman, a spokesman for the U.S. European Command in Stuttgart.

Marine Gen. James L. Jones, commander of Supreme Headquarters Allied Powers Europe, NATO&#8217;s military arm, said pulling together a mammoth relief effort that was fraught with obstacles was like climbing on top of a giant wave.