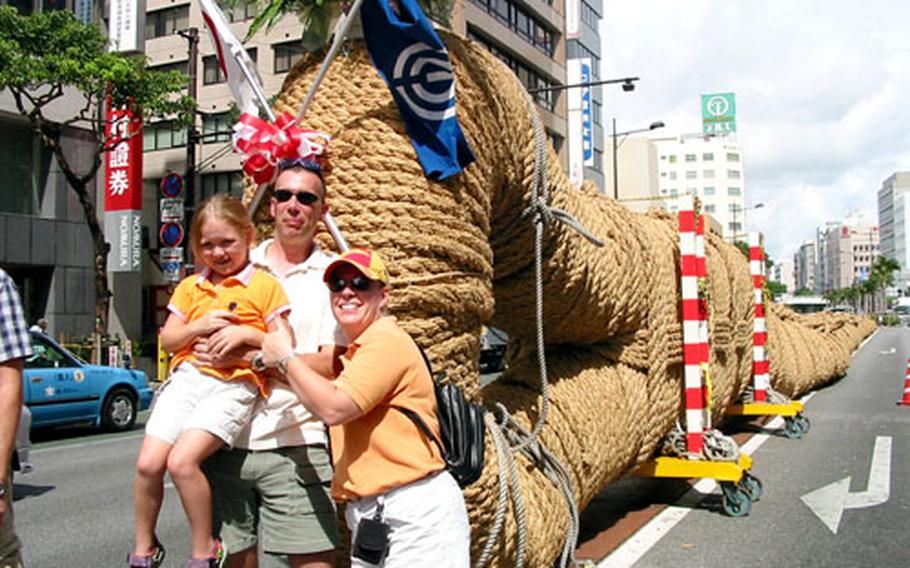 Marine Master Sgt. Russell Johnson and his wife, Katie, and daughter, Amber, pose before the Higashi, or East, end of the Naha Great Tug-of-War rope Sunday prior to the contest. Hundreds of American servicemembers and their family members took part in the contest. (David Allen / S&S)

Marine Master Sgt. Russell Johnson and his wife, Katie, and daughter, Amber, pose before the Higashi, or East, end of the Naha Great Tug-of-War rope Sunday prior to the contest. Hundreds of American servicemembers and their family members took part in the contest. (David Allen / S&S) 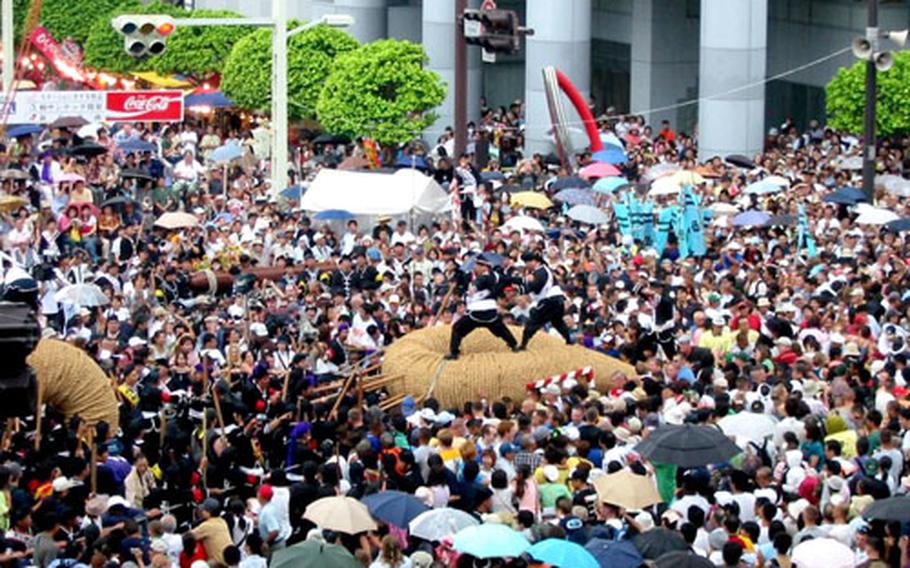 Leaders of the Nishi, or West, side in Sunday’s Great Naha Tug-of-War urge their members to pull the eyelet of their part of the 43-ton rope toward the Higashi, or East, side’s eyelet to make the knot creating the world’s largest rice straw rope. (David Allen / S&S) 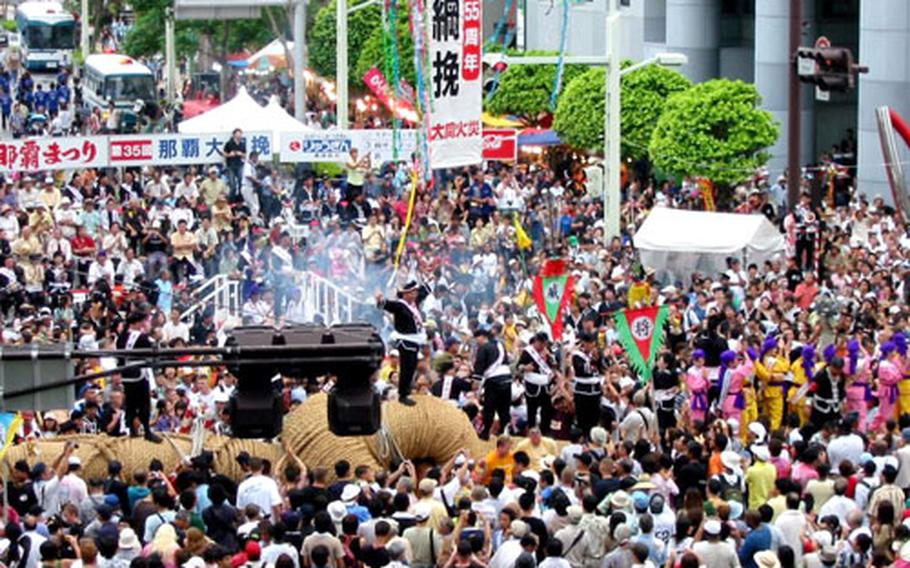 The leader of the Nishi side, atop rope, raises his arms in victory after winning the Great Tug-of-War on Sunday in Naha, Okinawa. (David Allen / S&S)

That is because October is the time for The Naha Great Tug-of-War, a record holder in the Guinness Book of World Records for the largest rope in the world made from natural materials.

Picture 15,000 people tugging on 43 tons of rope in the humid Okinawa heat, and you get a taste of what Sunday&#8217;s event was like. From a perch atop an apartment house a half block from the Kumoji intersection in downtown Naha, the scene below was a mass of humanity rippling to and fro as it strained to tug the massive 10-foot high rope across the intersection. Cheerleaders clad in traditional Okinawan black festival costumes stood on the rope and cheered their sides on with shrill shouts of &#8220;Haeiya!&#8221; &#8212; Okinawan for &#8220;heave ho.&#8221;

The giant rope actually was 90 ropes twined together to make the core, then covered with smaller &#8220;pulling ropes&#8221; that the participants grabbed and tugged on. This year there were 256 pulling ropes, ten more than last year.

The Higashi team was outmatched, straining for 15 agonizing minutes or so before the Nishi team was declared the winner.

Not that anyone seemed to mind. Once the contest was over people swarmed atop the ropes and danced, cheered and cut sections of the pulling ropes to bring home for good luck.

Last year some 275,000 people were on hand to cheer on the tuggers. This year there were 285,000 people crammed into downtown Naha for the epic tug-of-war, according to organizers.

The rope made the Guinness Book of World Records in 1997 as the world&#8217;s largest straw rope and each year it is just a bit bigger.

&#8220;It keeps growing,&#8221; Maezato said. This year&#8217;s rope is the biggest ever, partly because it marks the 35th anniversary of the restoration of the event following World War II.

The city was destroyed in an air raid on Oct. 10, 1944. On April 1, 1945, Okinawa was invaded by the largest landing of allied troops during the Pacific campaign. The Battle of Okinawa continued for 82 more days and was the bloodiest of the war in the Pacific.

Almost a third of the civilian population of Okinawa perished.

The contest wasn&#8217;t always a symbol of peace. The Naha tug-of-war dates back to the Ryukyu Kingdom&#8217;s glory days in the 17th century. But it was suspended from time to time after fierce fights between participants occasionally resulted in deaths. The last suspension began in 1935 as many of the island&#8217;s young men were conscripted into the army as the country began its drive to conquer Asia.

The rice straw rope actually comes in two lengths, each ending in a giant eyelet. One length is considered the female end and the other the male and they are connected by inserting the eyelet of the male end into the female and securing the knot with a 10-foot wooden peg.

The rope core of 90 solid straw ropes is twined together in a process that takes about 45 days every year. The rope this year has a core that dates back about 17 years.

The U.S. Army allows the rope committee to use a part of the Naha Military Port to prepare the rope for the festival.