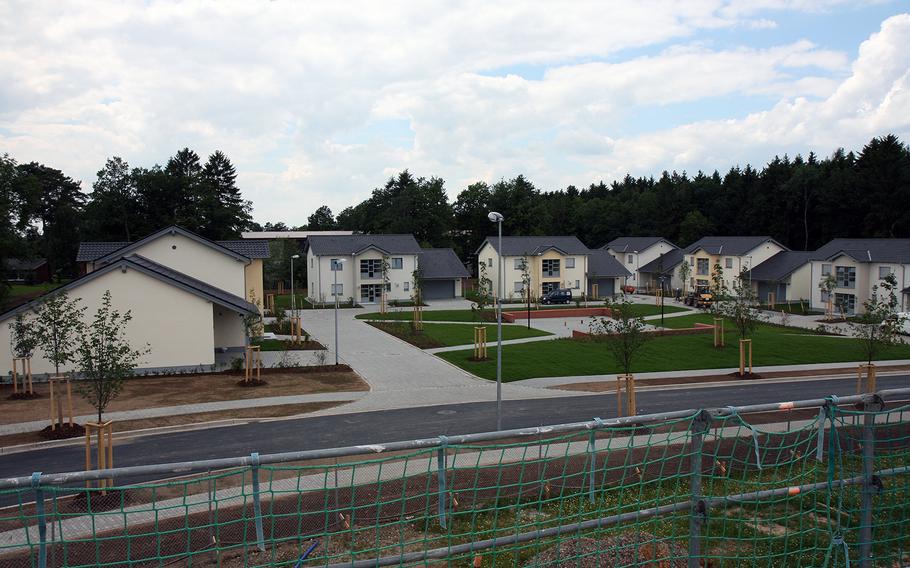 Seven completed housing units await their tenants in Spangdahlem Air Base, Germany. More than 130 other housing units were under construction across the street. (Evan Duncan/U.S. Army)

KAISERSLAUTERN, Germany — An Air Force audit has found that about 1,100 airmen at Spangdahlem Air Base were overpaid overseas housing allowance, some in the thousands of dollars.

Notifications are starting to go out to all affected airmen, who are assigned to the 52nd Fighter Wing, Air Force officials said Friday.

The affected airmen also are invited to attend town hall meetings on the topic, scheduled for 8 a.m. and 4 p.m. Tuesday.

Spangdahlem is the second Air Force base in Europe where auditors found a significant number of errors in overseas housing allowance computations.

In April, Air Force officials at Ramstein Air Base announced discrepancies in housing allowance payments were discovered during an audit of housing records. It was later determined that 189 airmen assigned to the Kaiserslautern area were overpaid a collective $590,276 in housing allowance from about 2009 to 2012. The largest overpayment was $26,317, Ramstein officials said in June.

A Spangdahlem spokesman said Friday it’s premature to release how much Spangdahlem airmen were overpaid in total, because the numbers are still being crunched. Maj. Bryon McGarry said the highest overpayment so far appears to be $29,700, the lowest $8.

The audit, he said, examined members currently at Spangdahlem who have been collecting overseas housing allowance from 2008 to 2015. Following receipt of the audit findings in March, all new housing allowance applications have been processed accurately, he said.

The combined errors in housing payments at the two bases have prompted U.S. Air Forces in Europe – Air Forces Africa to begin the process of submitting a group “remission of indebtness” for all airmen affected at Ramstein and Spangdahlem.

The plan is to ask higher headquarters to cancel or forgive the debt, meaning airmen would not be responsible for paying the money back. Airmen will, however, see their paychecks drop, as their housing allowance is adjusted to reflect what they should be getting. If the Air Force does not “forgive” the group debt, then airmen have the option to file individual waivers requesting they not have to repay the money.

“At all levels, we are committed to minimizing the financial impact to the member,” said Andy Coggins, chief of financial operations division for Headquarters USAFE-AFAFRICA. “We are taking every avenue to keep members informed, to avoid any negative financial outcome depending on the outcome of the group remission package.”

The housing allowance discrepancies at both bases were initially caught during an Air Force Audit Agency review, one that also included Aviano Air Base in Italy. That audit only evaluated a small sample of records, but since errors were found, Spangdahlem and Ramstein did their own, more comprehensive audits, officials said. No problems were found at Aviano.

USAFE-AFAFRICA ordered all of its bases to do a similar audit, but so far there are no indications the problem expands beyond Ramstein and Spangdahlem, officials said.

The housing form where the errors were made is unique to Germany, since it is in both German and English. USAFE Form 291A is the housing contract completed by both the landlord and renter. A housing official verifies the information and signs off on the lease, transferring rent and utility amounts to a separate form that’s processed by finance.

Most of the errors occurred as a result of double utility payments, officials said.

Overpayments occurred when the form turned into finance reflected rent that also included utilities; the member would receive a higher rental amount and then also be paid utilities.

The housing contract form is “being reviewed to have it revised,” Coggins said. “In the interim, training is being provided at each of the housing offices on how to avoid having this happen again until the new form gets released.”