Military convoy delivers construction material to THAAD base despite protests 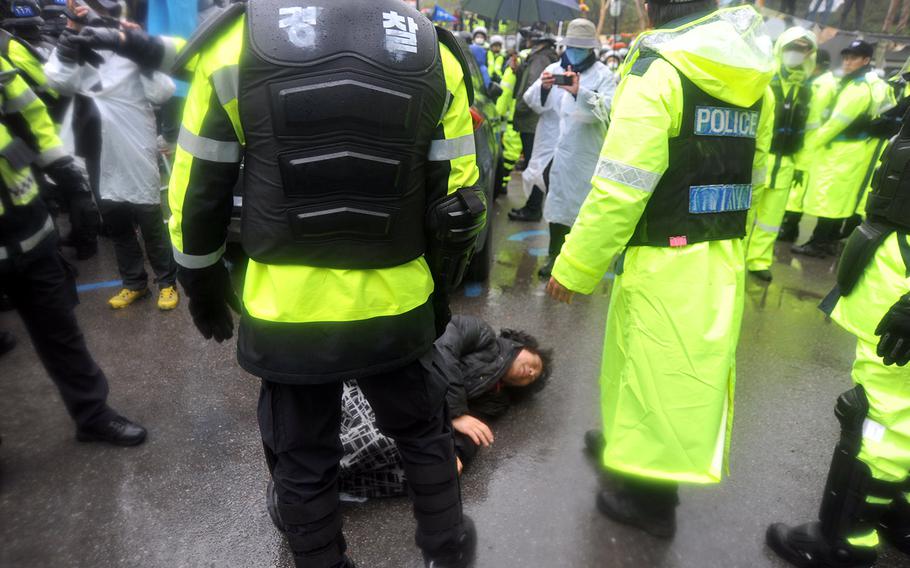 SEOUL, South Korea — A convoy delivered construction material and other equipment to the military base housing a controversial U.S. missile-defense system Monday after riot police scuffled with protesters trying to block the road, according to officials and witnesses.

South Korea’s Ministry of National Defense said it decided to make the move despite continued protests because of an urgent need to improve living conditions of the U.S. and South Korean soldiers on the former golf course-turned-base in the remote southeastern area of Seongju.

“The MND decided it couldn’t delay the construction anymore,” it said Monday in a statement. “We have decided to begin transporting personnel, material and equipment necessary for construction today in cooperation with police.”

Ministry officials have tried to persuade the protesters to allow peaceful passage of the trucks, saying the equipment is needed to fix leaky roofs, build sewage treatment facilities and do other maintenance. But residents and activists, who fiercely object to the missile battery known as THAAD suspect it’s a ruse to build military infrastructure.

The Yonhap News Agency reported that 22 vehicles carrying construction material, equipment and workers entered the THAAD base about three hours after police began removing about 200 protesters staging a sit-in on a bridge. Police placed four air mattresses under it in case of falls.

About 1,500 riot police were deployed to provide security, and several protesters and officers were injured in scuffles but none seriously, according to a local officer, who spoke on condition of anonymity because he wasn’t authorized to talk to the media.

No U.S. military forces or vehicles were involved, he said.

Several conservative groups also traveled to the village to show support for THAAD, which was initially agreed to by former President Park Geun-hye before she was ousted in a corruption and influence-peddling scandal.

The effort to station a Terminal High Altitude Area Defense system in the melon-farming area has faced several hurdles since it began in 2016, with Seoul and Washington saying the anti-missile battery was needed to face the growing threat from North Korea.

Villagers in the area said they fear adverse health and economic effects from the system, which includes six truck-mounted launchers and a powerful radar. Peace activists also object to its presence, saying it makes the area a target by threatening the North.

U.S. Forces Korea has said contractors have conducted site surveys for basic maintenance and routine repairs and no construction was being done to enhance THAAD operations.